If you want to parse this document using SAX, you would build a content handler by creating a Java class that implements the ContentHandler interface in the org.xml.sax package.

To illustrate how SAX works, let’s say you have a simple document, like this one:

If you want to parse this document using SAX, you would build a content handler by creating a Java class that implements the ContentHandler interface in the org.xml.sax package. Convenience adapters are available that simplify some of this.

Once you have a content handler, you simply register it with a SAX XMLReader, set up the input source, and start the parser. Next, the methods in your content handler will be called when the parser encounters elements, text, and other data. Specifically, the events generated by the preceding example will look something like this:

As you can see, the events reported follow the content of the document in a linear sequence. There are a number of other events that might be generated in response to processing instructions, errors, and comments. We will look at these in the examples that follow.

The SAX 2.0 API is comprised of two standard packages and one extension package. The standard packages are org.xml.sax and org.xml.helpers. The org.xml.sax pack-age contains the basic classes, interfaces, and exceptions needed for parsing documents. There, you will find most of the interfaces needed to create handlers for various types of events. We will use many of these classes and interfaces in the sample code later in this chapter. A summary of the org.xml.sax package is shown in Table 8.1. 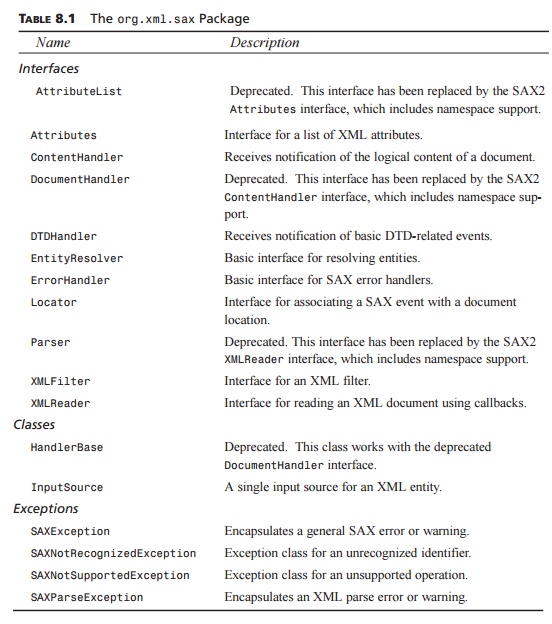 The org.xml.sax.helpers package contains additional classes that can simplify some of your coding and make it more portable. You will find a number of adapters that imple-ment many of the handler interfaces, so you don’t need to fill in all the methods defined in the interfaces. Factory classes provide a mechanism for obtaining a parser independent of the implementation. We will use many of these classes and interfaces in the sample code later in this chapter. A summary of the org.xml.sax.helpers package is shown in Table 8.2. 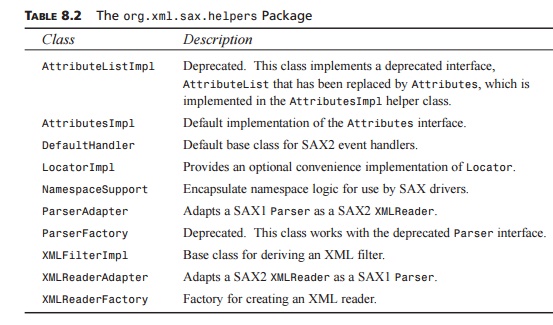 AttributeListImpl : Deprecated.  This class implements a deprecated interface,       AttributeList that has been replaced by Attributes, which is         implemented in the AttributesImpl helper class.

NamespaceSupport : Encapsulate namespace logic for use by SAX drivers.

ParserAdapter : Adapts a SAX1 Parser as a SAX2 XMLReader.

ParserFactory : Deprecated.  This class works with the deprecated Parser interface.

XMLFilterImpl : Base class for deriving an XML filter.

XMLReaderAdapter : Adapts a SAX2 XMLReader as a SAX1 Parser.

In terms of performance, there is not much hard data. You might have to do some bench-marking yourself to determine whether it’s fast enough for you. For the examples in this chapter, we will use Xerces, developed by the Apache XML group. Xerces is a validating parser with full support for SAX 2.0. Xerces is very popular and widely regarded as a high-quality parser. It is freely available at http://xml.apache.org.