Causes of the Revolution - Russian Revolution and its Impact | 10th Social Science : History : Chapter 1 : Outbreak of World War I and Its Aftermath

The biggest outcome of the War, the Russian revolution, was unique in world history. The socio-political and economic conditions prevailing in Russia were brought to a head by the vast losses and sufferings caused by the War.

The biggest outcome of the War, the Russian revolution, was unique in world history. The socio-political and economic conditions prevailing in Russia were brought to a head by the vast losses and sufferings caused by the War. There were really two revolutions in the year 1917, one in March and the other in November. On the abdication of the Tsar the bourgeois government which followed, wanted to continue the war. But the people were against it. So there was a second great uprising under the guidance their leader Lenin, who seized power and established a communist government in Russia.

Causes of the Revolution

In Russia Peter the Great and Catherine attempted westernisation without changing the social conditions. The Russian peasants were serfs tied to lands owned by wealthy Russians. After Russia’s defeat in the Crimean War, some reforms were introduced. In 1861 Tsar Alexander II abolished serfdom and emancipated the serfs. But they were not given enough land to subsist. These peasants became the powder keg for the revolution. The labourers and workers whose number had increased on account of industrialisation were aggrieved as they got very low wages.

The spread of revolutionary ideas among the intelligentsia and their repression by the Tsar’s government made the socialistically inclined students to carry their propaganda to the peasantry. Soon, based on the Marxist philosophy, new ideas began to take shape and a Social and Democratic Labour Party was formed.

Autocracy of the Tsar

Tsar Nicholas II of Romanov dynasty had little experience of government. His wife Tsarina Alexandra was a dominant personality and Nicholas was under her strong influence. Determined that Russia should not be left out in the scramble for colonial possessions, Nicholas encouraged Russian expansion in Manchuria. This provoked a war with Japan in 1904. The resulting Russian defeat led to strikes and riots. On 22 January 1905 Father Gapon, a priest, organised a march of men, women and children on the Tsar’s Winter Palace in St. Petersburg demanding a representative national assembly and agrarian and industrial reforms. But police and soldiers fired on the procession. Hundreds were killed and many thousands wounded. The events of this day (known as Bloody Sunday) led to riots, strikes and violence. Nicholas was forced to grant a constitution and establish a parliament, the Duma. This was no longer satisfactory to the left-wing parties that formed a Soviet (council) of worker's delegates in St Petersburg, led by Trotsky. 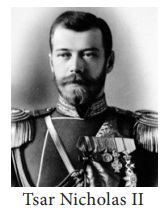 Opposition to Tsar and Dissolution of Duma

The outbreak of the First World War had temporarily strengthened the monarchy, as Russia allied to France and Britain. As there was rumour of a palace revolution. Nicholas made himself the Commander-in-Chief of the army. At the end of 1916, Rasputin, who had a domineering influence over the Tsar and the Tsarina, was murdered by a member of the Tsar’s family. The members of the St. Petersburg Soviet were arrested. Whenever the Duma opposed the Tsar’s move, it was dissolved and fresh elections held. Without change of government policy, the fourth Duma ended with the revolution of 1917.

The bread shortages among women textile workers, many with husbands in the army, forced them to go on strike anyway and march through the factory areas of Petrograd, the capital of the Russian Empire. Masses of women workers demanding “Bread for workers” waved their arms towards factory workers and shouted “Come out!” “Stop work!” The city’s 400,000 workers joined the movement the next day (24 February). 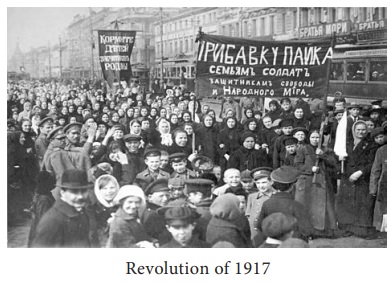 The government used the troops to break the strike. But soon mutinies broke out in the barracks. The Tsar ordered a declaration of martial law. But his order was not broadcast in the city, as there was no one to do this job. The Tsar then tried to return to Petrograd. The railway workers stopped his train. The generals at the front and some leaders in Petrograd, frightened by these developments pleaded with the Tsar to abdicate. On 15 March, Nicholas II abdicated.

The revolutionary Tamil poet Bharathiyar cheerfully welcomed the revolution in Russia by penning these poetic lines…..

The Mother Great, the Power supreme,

Turned her glance benign towards Russia,

The Revolution of the Age,

The tyrant howling falls down limp,

The shoulders of the heavenly gods,

Are swelling now with joy and pride,

Perish. O people of the world,

There were two parallel bodies to take on government functions. One was of the bourgeois politicians of the old state Duma, comprising propertied classes. On the other there were workers’ delegates drawn together in a workers’ council, or Soviet. Those in the Duma were able to form a provincial government with the consent of the Soviets. The Soviet was dominated by Mensheviks and the minority Bolsheviks were timid and undecided. The situation changed with the arrival of Lenin.

Lenin was in Switzerland when the revolution broke out. Lenin wanted continued revolution. His slogan of ‘All power to the Soviets’ soon won over the workers’ leaders. Devastated by war time shortages, the people were attracted by the slogan of ‘Bread, Peace and Land.’ But the Provisional government made two grave mistakes. First, it postponed a decision on the demand for the redistribution of land and the other was government decided to continue with the war. Frustrated peasant soldiers deserted their posts and joined those who had resorted to land grabbing. This intensified the rising in Petrograd led by Bolsheviks. The government banned Pravda and arrested all Bolsheviks. Trotsky was also arrested.

Takeover by the Bolshevik Party under Lenin’s leadership

In October Lenin persuaded the Bolshevik Central Committee to decide on immediate revolution. Trotsky prepared a detailed plan. On 7 November the key government buildings, including the Winter Palace, the Prime Minister’s headquarters, were seized by armed factory workers and revolutionary troops. On 8 November 1917 a new Communist government was in office in Russia. Its head this time was Lenin. The Bolshevik Party was renamed the Russian Communist Party.

Lenin was born in 1870 near the Middle Volga to educated parents. Influenced by the ideas of Karl Marx, Lenin believed that the way for freedom was through mass action. Lenin gained the support of a small majority (bolshinstvo), known as Bolsheviks, which became the Bolshevik Party. His opponents, in minority (menshinstvo), were called Mensheviks. 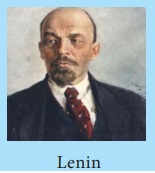 Outcome of the Revolution

The Russian Communist Party eliminated illiteracy and poverty in Russia within a record time. Russian industry and agriculture developed remarkably. Women were given equal rights, including rights to vote. Industries and banks were nationalised. Land was announced as social property. Land was distributed to poor peasants. Lenin thought the most important factor for the fall of Provisional government was its failure to withdraw from World War. So Lenin immediately appealed for peace. Unmindful of the harsh terms dictated by the Central Powers, Lenin opted for withdrawing from the War to concentrate on the formation of new government. In March 1918 the Treaty of Brest– Litovsk was signed.

Global Influence of the Russian Revolution

The revolution fired people’s imagination across the world. In many countries, communist parties were formed. The Russian communist government encouraged the colonies to fight for their freedom. Debates over key issues, land reforms, social welfare, workers’ rights, and gender equality started taking place in a global context.

Pravda is a Russian word meaning “Truth”. It was the official newspaper of the Communist Party of the Soviet Union from 1918 to 1991.