In the nineteenth century, European powers had colonised many other countries. By 1880, most of the Asian countries had been colonised.

In the nineteenth century, European powers had colonised many other countries. By 1880, most of the Asian countries had been colonised.

Only Africa was left. The occupation, division and colonisation of Africa took place from 1881 to 1914. After 1870, England, France, Belgium, Italy and Germany joined in the scramble for colonies.

Despite the lead in industrial growth and the control of a vast empire England was not satisfied. England was in competition with Germany and the United States, which were producing cheaper manufactured goods and thus capturing England’s markets. National rivalry led to frequent clashes between these great powers in Asia and Africa and Europe.

Asia: The Rise of Japan

In Asia, Japan during this period (Meiji era from 1867 to 1912), imitating Western nations had become their equal in many respects. Though the outlook of the rulers still remained feudal, Japan took to Western education and machinery. With a modern army and navy, Japan had emerged as an advanced industrialised power. In 1894 she forced a war on China. The crushing defeat of China by little Japan in the Sino-Japanese War (1894-95) surprised the world. Despite the warning of the three great powers Russia, Germany and France - Japan annexed the Liaotung peninsula with Port Arthur. By this action Japan proved that it was the strongest nation of the East Asia.

Japan, however, in view of the pressure mounted by European Powers, soon gave up its claim over Port Arthur. Russia took advantage of this and sent a large army to Manchuria. Japan entered into an alliance with England in 1902 and demanded that Russia withdraw troops from Manchuria. Russia underestimated Japan. In 1904 the war began between the two countries. In this Russo-Japanese War, Japan defeated Russia and got back Port Arthur. After this War Japan entered the “circle of the great Powers”.

After 1905 Japan took control of Korean domestic and foreign policy. The assassination of a prominent Japanese diplomat provided the excuse in 1910 for Japan’s annexation of Korea. The confusion in China following the downfall of the Manchu dynasty in 1912 provided Japan an opportunity for further expansion. Japan demanded the transfer of German rights in Shantung to Japan and the recognition of Japanese hold over Manchuria. This strong-arm diplomacy aroused the hostility of both China and the European Powers.

Colonisation and its Fallout

In 1876 barely 10 percent of Africa was under European rule. By 1900 practically the whole of Africa was colonised. Britain, France and Belgium had divided the continent between them, leaving a few areas for Germany and Italy. Britain, France, Russia and Germany also established “spheres of influence” in China. Japan took over Korea and Taiwan. France conquered Indo-China. The US took the Philippines from Spain, and Britain and Russia agreed to partition Iran. 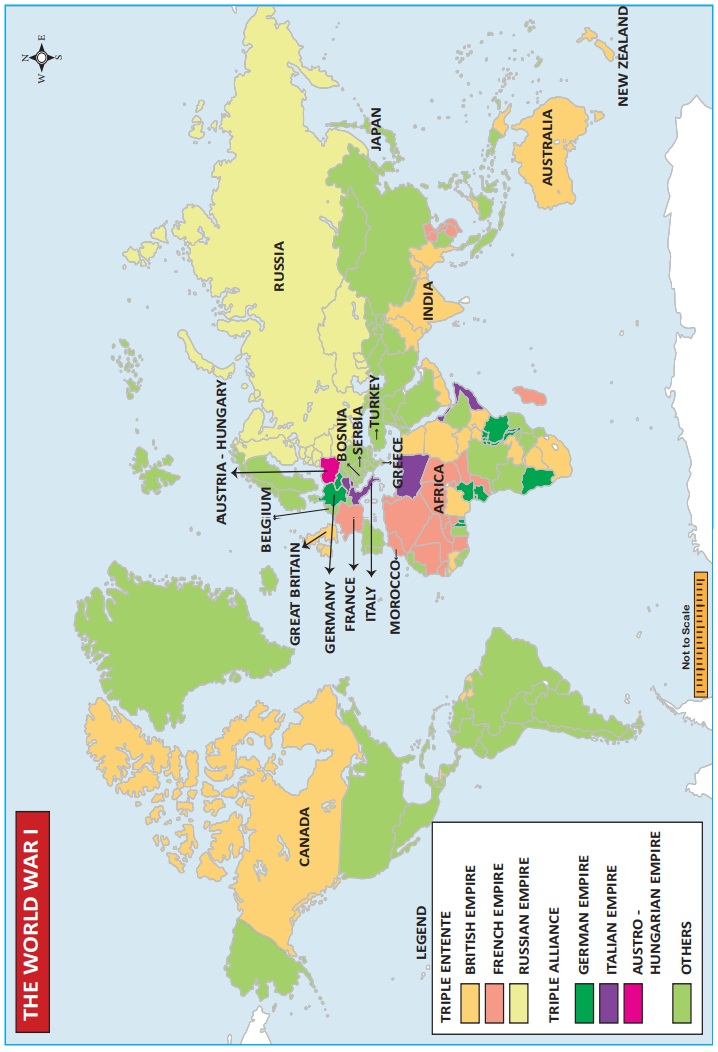 The first European attempts to carve out colonies in Africa resulted in bloody battles. The French had to fight a long and bitter war to conquer Algeria and Senegal. The British lost to the Zulus (1879) and to the Sudanese Army (1884). The Italian army suffered a devastating defeat at the hands of an Ethiopian army at Adowa (1896).