It is also known as Roto moulding, roto casting or spin casting. 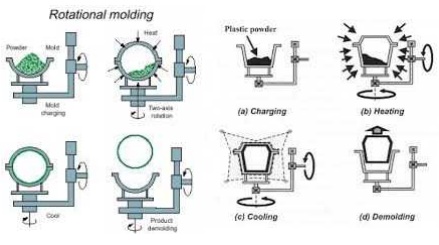 It is also known as Roto moulding, roto casting or spin casting.

The thin walled metal mould is a split female mould made of two pieces and is designed to be rotated about two perpendicular axes. The steps followed in rotational moulding are.

A predetermined amount of plastic , powder or liquid form , is deposited in one half of a mould.

The mould is closed.

The mould is rotated biaxially inside an oven. The hollow part should be rotated through two or more axes, rotating at different speeds, in order to avoid the accumulatiuon of polymer powder.

The plastic melts and forms a coating  over the inside surface of the mould.

The mould is removed from the oven and cooled usually by fan. The polymer must be cooled so that it solidifies and can be handled safely by the operator.The part will shrink on cooling, coming away from the mould and facilitating easy removal of the part.

The part is removed from the mould.

2.It is not possible to make some sharp threads. 3.Cannot make parts with tight tolerance.