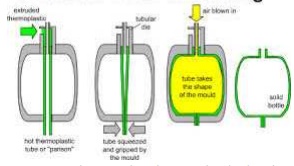 •     Melting the resin- done in extruder

•     The parison is placed inside a mold, and inflated so that the plastic is pushed outward

against the cavity wall

The parison can be formed by

–  Parison is formed from by forcing the plastic through an extrusion

Material enters the die, flow around the mandrel so that extrudate would be cylindrical

– In some blow molding operations, the air is introduced from the bottom through an inlet

This process can be;

•     use either reciprocating screw or an accumulator system

•     In this system, the output of the extruder is matched by having multiple molds which seal and blow the parison and then move away from extruder to cool and eject

•     In practical case, the mold cycle is longer than time required to extrude a new parison

•     If the mold cycle is twice than time needed for creating a parison, a two mold system can be used

•     The parison is not a finished product, but it is subjected to subsequent step to form the final shape

•     Second step, blowing of the intermediate part in a second mold

•     Because of distinct separation of the two steps, the parison made by injection molding is called a perform

•     Resin is then injected to form a cylindrical part

•     The mold is opened and perform is ejected

The perform can be stored until the finished blow molded is needed.

The flexibility of separating the two cycles has proven useful in manufacture of soda pop bottle. 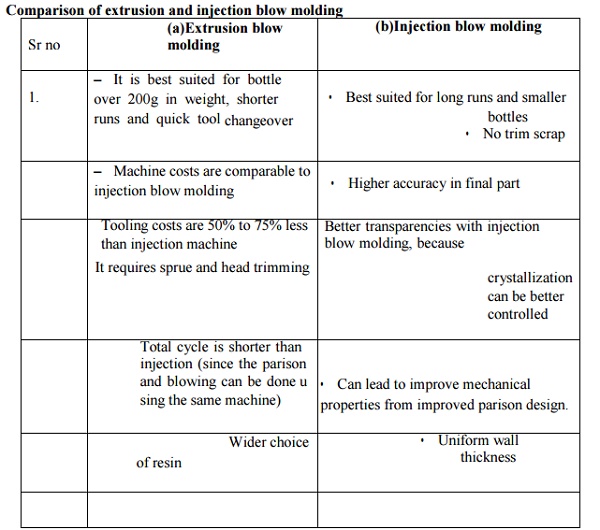