The crust is a storehouse of rocks. An aggregate of minerals on the Earth’s crust is called ‘rock’.

The crust is a storehouse of rocks. An aggregate of minerals on the Earth’s crust is called ‘rock’. It may be hard and compact like ‘granite’ or soft as ‘clay’ or loose as ‘sand’.

Based on formation, rocks are classified as: 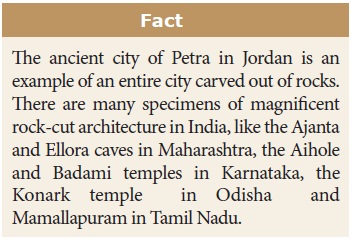 The word ‘igneous’ is derived from the Latin word Ignis meaning ‘Fire’. The interior of the Earth contains very hot molten material called ‘Magma’. When the magma reaches the Earth’s surface, it is referred to as ‘Lava ’. The lava on the surface cools down and gets solidified as rocks called igneous rocks. Granite and basalt are examples of such rocks. Igneous rocks are also called Primary or Mother rocks because all other rocks are directly or indirectly formed from them.

These sedimentary rocks are named after the latin word 'sediment' meaning ' settle. Rivers, glaciers and winds carry bits of rock and soil and deposit them in layers. 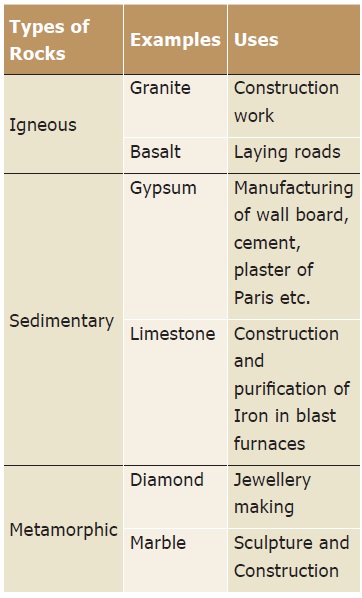 After a few million years, these deposits harden into compact rocks and are called Sedimentary rocks.

The bodies of plants and animals that fall on the deposits get embedded in the layers and form Fossils. Sandstone, limestone, chalk, gypsum, coal and conglomerate are examples of sedimentary rocks.

The term ‘metamorphic’ is derived from the word ‘metamorphosis’, which means, ‘change of form’. When igneous or sedimentary rocks are subjected to extreme heat and pressure, they undergo a complete change in their form and character .i.e., in course of time, granite may get transformed to gneiss, basalt to schist, limestone to marble and sandstone to quartzite. 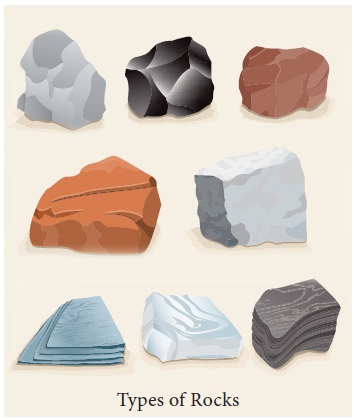 The Rock cycle is a continuous process through which igneous, sedimentary and metamorphic rocks are transformed from one form to another. 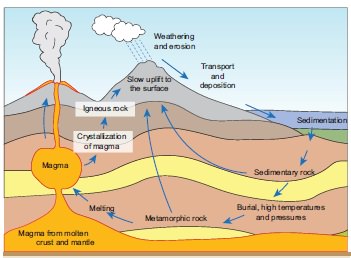