Surgical risks include acute and subacute complications like he-morrhage, postoperative infections and seizures, as well as more serious enduring side effects such as focal neurological deficits, cognitive or personality change and weight gain.

Surgical risks include acute and subacute complications like he-morrhage, postoperative infections and seizures, as well as more serious enduring side effects such as focal neurological deficits, cognitive or personality change and weight gain.

With regard to cingulotomy, an independent study of a cohort of patients was performed for the US government by the Department of Psychology at the Massachusetts Institute of Technology. The authors reported that they found no evidence of lasting neurological, intellectual, personality, or behavioral deficits after surgery (Corkin et al., 1979; Corkin, 1980). In fact, a comparison of preoperative and postoperative scores revealed modest gains in the Wechsler IQ ratings. The only apparent irreversible decrement identified by these investigators was a decrease in performance on the Taylor Complex Figure Test in patients older than age 40 years. Several authors, using varying assessment strategies and batteries pre and postoperatively, have reported the relative lack of serious adverse cognitive effects following cingulotomy (Corkin et al., 1979; Corkin, 1980), subcaudate tractotomy (Bartlett and Bridges, 1977; Göktepe et al., 1975), limbic leukotomy (Mitchell-Heggs et al., 1976; Kelly, 1980) and capsulotomy (Herner, 1961; Bingley et al., 1977; Vasko and Kullberg, 1979) (Figures 75.1 and 75.2). Nevertheless, the need to include carefully thought out (based on the procedure involved) neurocognitive assessments before and at regular intervals after the surgery/surgeries cannot be overstated. Long-term studies are desirable for the existing procedures better to inform patients and clinicians of the risks as well to help rehabilitative efforts. 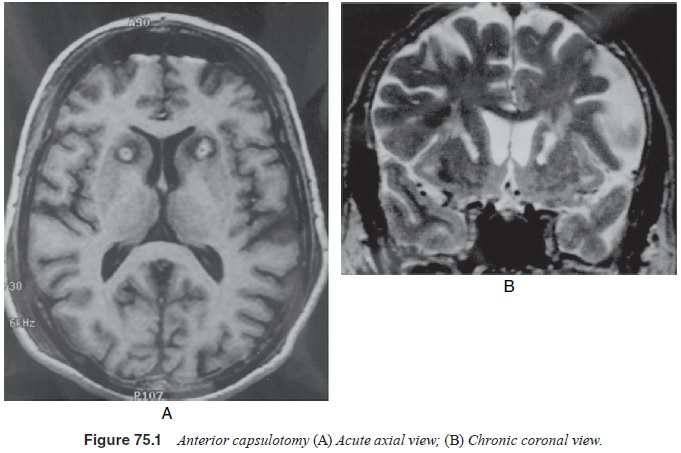 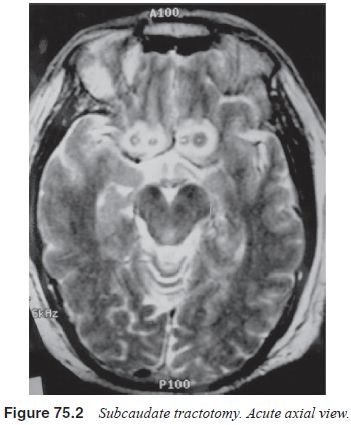 As these neurosurgical procedures may be expected to influence, directly or indirectly, frontal lobe and other functions compris-ing one’s “personality”, it is important that this is an integral part of the pre and postoperative assessment. Important domains that need to be addressed are executive functions, impulsivity/aggres-siveness, social propriety and mood changes. Ideally this would involve input from both the patient as well as the family and treat-ing clinician. In general, anecdotal evidence from most reported studies concerning the different procedures suggest a remarkable freedom from significant adverse personality changes. On the contrary, the few studies that have directly addressed this issue re-port an improvement in negative personality traits at follow-up.

One of the better researched instruments is the Karolinska Scales of Personality (KSP), developed by Schalling and coworkers (1987). The KSP contains subscales measuring traits related to frontal lobe function as well as those reflecting anxiety proneness. In capsulotomy studies reported from Sweden, the KSP was administered to 24 consecutive patients 1 year and 8 years after radiofrequency capsulotomy. Small changes in mean scores towards normalization were apparent on all 15 KSP subscales at the 1-year follow-up and significant improvement was reported in anxiety proneness at the 8-year follow-up (Mindus et al., 1999).

One would expect that the more precise modern surgical procedures should further reduce this risk. In fact most recent studies report a low incidence of adverse behaviors postsurgery. However, this remains a potential risk and conclusions based on observations made on groups of patients may not preclude nega-tive adverse effects in an individual patient.

While suicide is not considered a known complication of neuro-surgical procedures in nonpsychiatric patients undergoing these procedures, the possibility of contributing directly or indirectly to this process in psychiatric patients is theoretically present. However, it is important to note that severe major depression is associated with high lifetime suicide rates (approximately 3–8%) (Nierenberg et al., 2001). Thus, of the suicides reported in psy-chiatric neurosurgical cohorts, it is difficult to ascertain whether these are a result of existing psychopathology or whether the surgery contributed in some way to this process.

For example, Jenike and colleagues (1991) found that four of 33 patients who had undergone cingulotomy for OCD had died by suicide at follow-up that averaged 13 years. Chart reviews revealed that each of these suicide completers had been noted to suffer from extensive comorbid disease (especially severe depression) with prominent suicidal ruminations at initial evaluation for cingulotomy. On the contrary, none of the OCD patients without baseline suicidality became suicidal after the operation. In the large (n 5 44) prospective long-term follow-up study following one or more cingulotomies, Dougherty and colleagues (2002) reported one suicide (2%) in a patient having severe depression with chronic suicidal ideation and a past history of a suicide attempt. Thus, in most published studies, the suicide rate has been low and these patients have been noted to have had significant presurgical suicidality. This highlights the need carefully to assess for and monitor suicidality in this severely ill population.

Patients with a poor response to surgery may be at increased risk for suicide (Jenike et al., 1991). Preventative strategies there-fore include careful assessment of suicidality at baseline and fol-low-ups, assessment of family and clinician support networks, clear explanations of the scope of the procedure as well as the long response latency (usually a year for cingulotomy), education that presurgical nonresponders sometimes respond to treatment postsurgery, and the need for secondary or tertiary lesions in case of cingulotomy in some patients to achieve response.