Multifetal pregnancies are associated with increased peri-natal morbidity, 3 to 4 times that of a comparable singleton pregnancy.

Multifetal pregnancies are associated with increased peri-natal morbidity, 3 to 4 times that of a comparable singleton pregnancy.

The most significant cause of morbidity is preterm labor and delivery.

Compared with singleton pregnancies, which are delivered at an average gestational age of 40 weeks, twins are deliv-ered at an average of 37 weeks, triplets at 33 weeks, and quadruplets at an average of 29 weeks. Thus, with each additional fetus, the length of gestation is decreased by approximately 4 weeks. Other associated morbidities includeintrauterine growth restriction, hydramnios (in approximately 10% of multiple gestations, predominantly monochorionic gestations), preeclampsia (3 times more frequent in twin gestations), congenital anomalies, postpartum hemorrhage, placental abrup-tion, and umbilical cord accidents. Both spontaneous abor-tions and congenital anomalies are approximately twice as common in multiple gestations (Table 17.1). 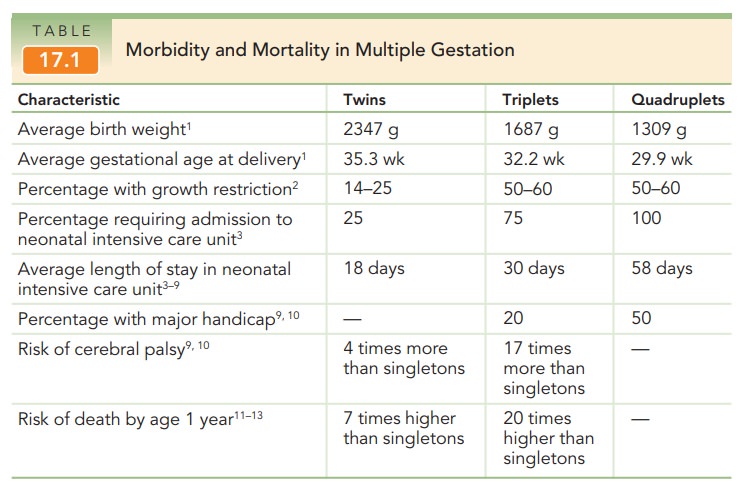 As development of a monochorionic gestation progresses, various vascular anastomoses between the fetuses can develop that, in turn, can lead to a condition known as twin–twin transfusion syn-drome. In this circumstance, through arterial-venous anas-tomoses, there is net flow from one twin to another, often with untoward pregnancy outcomes. The so-called donor twin can have impaired growth, anemia, hypovolemia, and other problems. The recipient twin can develop hyper-volemia, hypertension, polycythemia, and congestive heart failure as a result of this preferential transfusion. A sec- ondary manifestation involves amniotic fluid dynamics. The hypervolemia in the recipient twin leads to an increase in urinary output and, in turn, to an increase in amniotic fluid volumes (hydramnios). The opposite effect may occur in the donor twin—hypovolemia leads to decreased urinary output and, possibly, a decrease in amniotic fluid volume (oligohydramnios). Hydramnios in the one twin compounds the risk of preterm labor already present for multifetal preg-nancies. Traditionally, serial removal of amniotic fluid from the sac of the recipient twin has been the only treatment option with improved survival. However, intrauterine laser ablation of the vascular anastomoses has met with some suc-cess in treating this difficult problem, especially in the most severe cases. Other vascular abnormalities include absenceof an umbilical artery, which may be associated in 30% of cases with other congenital problems, especially renal agenesis. A single umbilical artery is seen in approximately 3% to 4% of twins, compared with 0.5% to 1% of singletons.

Death of One Fetus

Multiple gestations, especially high-order gestations, are at increased risk of losing one or more fetuses remote from delivery. No fetal monitoring protocol has been shown to predict most of these losses. In addition, authorities disagree about the preferred antepartum surveillance method and manage-ment once a demise has occurred. Some investigators advo-cate immediate delivery of the remaining fetuses. However, if the death is the result of an abnormality of the fetus itself rather than maternal or uteroplacental pathology, and the pregnancy is remote from term, expectant management may be appropriate. The most difficult cases are those in which the fetal demise occurs in one fetus of a monochori-onic twin pair. Because virtually 100% of monochorionic placentas contain vascular anastomoses that link the circu-lations of the 2 fetuses, the surviving fetus is at significant risk of sustaining damage caused by the sudden, severe, and prolonged hypotension that occurs at the time of the demise or by embolic phenomena that occurs later. By the time the demise is discovered, the greatest harm has most likely already been done and there may not be any benefit in immediate delivery, especially if the surviving fetuses are very preterm and otherwise healthy. In such cases, allowing the pregnancy to continue may provide the most benefit.