The Mughal period witnessed a continuing assertion of all the basic elements in puranic traditions.

The Mughal period witnessed a continuing assertion of all the basic elements in puranic traditions. Though it was difficult to speak of Hinduism as a single body of doctrine, in view of the countless faiths and innumerable customs and practices, having developed in mutual interaction and expressed in a large part in the same language (Sanskrit), the different sects of Hinduism yet shared the same idiom and the same or similar deities. The sixteenth and seventeenth centuries were the centuries of Vaishnavism. Tulsidas (Ramcharitmanas) a great proponent of Rama cult in his popular verses of devotion portrayed Rama as a god incarnate. The expression of bhakti was deeply emotional as the object of bhakti (devotion) was Krishna, an incarnation of Vishnu.

The Bhakti movement made great strides during this period. Poets and saints emerged from various parts of the country. They were critical of rituals, and criticised the caste system. Rather than using Sanskrit for expressing their devotion, they employed the language of the common people. The radical ideas, and the easy but catchy language often set to music made them popular among the masses. Some of the major religious figures like Vallabhacharya and his son Vitthalnath propagated a religion of grace; and Surdas, an adherent to this sect, wrote Sur- Saravali in the local language. Eknath and Tukaram were Bhakti poets from Maharashtra. The Dasakuta movement, a bhakti movement in Karnataka, popularised by Vyasaraya, turned out to be a lower class movement.

The most important figure of the Bhakti movement was Kabir. Said to be a weaver, Kabir propounded absolute monotheism, condemned image worship and rituals, and the caste system. His popular poetry written in a simple language was spread orally across large parts of north India.

An interesting aspect of the Bhakti poets was that they came from lower castes practising craft and service occupations. 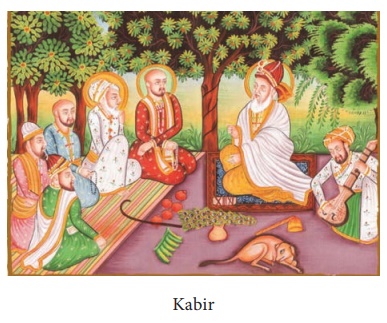 Kabir was a weaver, Ravidas, a worker in hides, Sain, was a barber, and Dadu, a cotton carder. The Satnami sect in Haryana credited its origin to Kabir and his teachings. While Sanskrit and Persian were the languages of administration and intellectual activity, the vernacular languages demonstrated their literary vitality.

Sikhism originated as a popular monotheistic movement, and evolved into one of the recognised religions of the world. Guru Granth Sahib, the holy book of Sikhs, contained the sayings of Muslim saint Shaikh Farid and of Bhakti poets such as Namdev, Kabir, Sain and Ravidas. Guru Nanak believed in one God who was formless and omnipresent. He condemned image worship and religious rituals. He stressed ethical conduct, kindness to all human beings and condemned caste system.

India was a fertile soil for the prevalence of Sufism or Muslim mysticism that had its origin in Iran. It was accepted by the orthodox theologians as long as it fulfilled the obligations of the shariah. Sufism played a key role in creating religious harmony.

Along with the European traders came the Christian missionaries like Roberto De Nobili, Francis Xavier. The early missionaries were Catholics. The first Lutheran missionaries under Danish patronage arrived in 1706 at Tranquebar and Ziegenbalg translated the New Testament of the Bible into Tamil in 1714, and soon the Old Testament as well. This was the earliest translation of the Bible in any Indian language.