A relational problem is a situation in which two or more emo-tionally attached individuals (i.e., family members, romantic partners) engage in communication or behavior patterns that are destructive or unsatisfying, or both, to one or more of the indi-viduals.

A relational problem is a situation in which two or more emo-tionally attached individuals (i.e., family members, romantic partners) engage in communication or behavior patterns that are destructive or unsatisfying, or both, to one or more of the indi-viduals. Relational problems deserve clinical attention because, once initiated, they tend to be perpetuating and chronic, and are frequently contemporaneous with or are followed by other seri-ous problems, such as individual symptoms in the most vulnera-ble members of the family (e.g., depression) or social unit dissolu-tion (e.g., divorce). They may be diagnosed either in the presence or absence of individual disorders given in the Diagnostic and Statistical Manual of Mental Disorders (DSM).

The strength and direction of causality between the indi-vidual and the relational problem are empirically undetermined. Few empirical investigations of the relational problems that are “precursors” to individual pathology have been conducted. Most of the existing research selects disturbed family units in which one member has an existing disorder (e.g., schizophrenia, de-pression) and examines the communication difficulties that ac-company the disorder. Thus, cause-and-effect relations between individual disorders and relational difficulties have not been ex-perimentally specified.

There is also the issue of generalization: Do those who manifest relational problems with a spouse or other family mem-ber manifest these same problems with others and in other con-texts? Only a beginning literature exists on this issue. However, preliminary data suggest that some individuals manifest severe communication difficulties with their spouses or other family members but not with persons outside the family.

o     not otherwise specified (e.g. difficulties with others outside of the family).

Constructs and Manifestations of Relational Problems

The empirical data substantiate the existence of relational dif-ficulties that can be reliably assessed and have clinical signifi-cance. The data are sparse in reference to each DSM disorder and coexisting family relational difficulties, with the exceptions of depression and schizophrenia.

In our examination of the construct of relational problems, we emphasize those constructs that have shown reliable assess-ment in research and that have been found to 1) distinguish dis-tressed from nondistressed couples or families, or 2) to identify couples or families in which one or more members manifest sig-nificant individual pathologic conditions.

Four major constructs (Table 65.1) have been investigated that describe nodal areas of relational difficulty in the family and marital environment: structure, communication, expression of affect and problem solving. Relational difficulties in other environments (e.g., work) have not been described in the clinical literature. 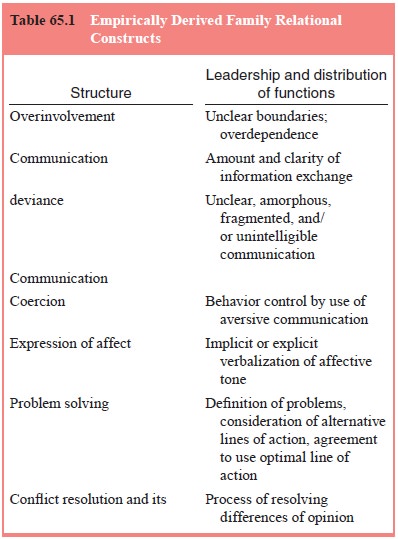 It is interesting to compare the constructs investigated in the couples and family contexts. The areas of affective communication and conflict resolution are almost identical in conceptualization, behavioral criteria and importance in the spouse–spouse and par-ent–child communication domains. However, three other rather sharply defined constructs in the parent–child literature are not fully represented in the spouse–spouse literature: communication deviance (CD), emotional overinvolvement and coercive process. In the cognitive realm, the CD construct (unclear, amorphous, or fragmented communication) has been investigated primarily among schizophrenic patients and their parents; comparable work has not been done with couples. The more general construct of communication has been explored with marital couples, with no theoretical link to thought disorder and schizophrenia.

Coercive processes – the shaping of the behavior of parents by negative behavior on the part of the child – is similar to nega-tive escalation in couples. Although not yet investigated in cou-ples, it is quite conceivable that one spouse could effectively uti-lize a coercive process with the other spouse. Overinvolvement, which has been explored in the parent–child literature, may have a related domain in the marital literature, specifically, structure. Indeed, the over involvement construct has been seen as most relevant with children and parents and has little predictive utility in adult couple samples. However, it seems that the concept of structure, with the issues of leadership, dominance and submis-sion, and distribution of functions, is an area that needs further exploration in reference to both couples and the entire family.

For a marriage or family to function as a unit requires leadership and distribution of functions. Leadership, dominance and power distribution can all have a profound effect on the quality of inter-action satisfaction and on adequate functioning of both couples and families, both in ordinary and in stressful circumstances.

Dominance as measured by verbal frequency has not distin-guished functional and dysfunctional families. When one spouse is depressed, the power distribution is not always as theoretically hypothesized (i.e., depressed spouse submissive to dominance of the nondepressed partner). Contrary to expectation, depressed patients produce substantial control-oriented communication with their spouses during an acute depressed episode. Introversion and interpersonal dependency may reflect enduring abnormalities in the functioning of individuals with remitted depression.

Some parent–offspring relationships are marked by unclear boundaries and overdependence, often inhibiting the offspring’s ability to separate, individuate, or recover from illness. With re-spect to psychiatric and sometimes medical disorders, it is not unusual to see a pairing of an overprotective, overinvolved parent with a highly disabled, passive, withdrawn offspring. Because ill offspring in these families often elicit such responses, an overin-volved relationship is best thought of as a dyadic attribute rather than a problem generated by a parent. Overinvolvement is often difficult to define or assess in parents of school-age or adoles-cent children. However, among studies of youth, those focusing on separation anxiety, and school refusal in particular, describe parental overinvolvement and protectiveness as complicating features.

The term expressed emotion (EE) is used to refer to criti-cal comments, hostility, and/or overinvolvement as expressed by a family member toward another family member with a mental disorder. Studies suggest that overinvolvement is a risk factor for later episodes of psychosis among patients diagnosed with schizophrenia, independent of the level of criticism demonstrated by the family.

The amount and quality of verbal communication have differen-tiated distressed and nondistressed couples, and treatment leads to an improvement in communication.

Five areas of cognitive phenomena are hypothesized to play important roles in marital communication and maladjust-ment: selective attention, attributions, expectancies, assump-tions and standards. Not all of these areas have been equally investigated.

Distressed spouses focus on negative behavior; positive interactions often are ignored. Distressed spouses tend to attribute their partner’s undesired communication behavior as global and the partner is blamed for her or his negative behavior, which is seen as intentional, global, stable and originating from internal factors. In contrast, nondistressed individuals give each other credit for positive behavior and overlook or exonerate their spouses for negative behavior. While the evolution or developmental history of these cognitive sets has not been clearly delineated, current evidence suggests that negative attributions for partner behavior may predict marital satisfaction over time.

Many of the same disordered processes (e.g., expression of hos-tility or excessive criticism, poor information exchange, lack of conflict resolution) in the spousal communication literature are presumed to disrupt healthy family functioning. Unlike in the marital literature, however, the independent variable in family studies is often the presence or absence of a psychopathologic condition in an offspring or parent rather than high or low levels of marital distress.