The frictionless flow of a perfect gas through a constant area duct in which heat transfer to or from the gas is the dominant factor bringing about changes in the flow is referred to as Rayleigh flow or diabetic flow.

The friction less flow of a perfect gas through a constant area duct in which heat transfer to or from the gas is the dominant factor bringing about changes in the flow is referred to as Rayleigh flow or diabetic flow. In thermodynamic coordinates, the Rayleigh flow process can be described by a curve known as Rayleigh line and is defined as the locus of quasi- static thermodynamic state points traced during the flow. The Rayleigh line satisfies the equation of state along with simple forms of continuity and momentum equation.

In order to formulate the equation for the Rayleigh line, let us consider steady flow of a perfect gas through a constant area passage in which transfer of heat with the surroundings is the major factor responsible for changes in fluid properties. The simple form of continuity equation for steady one dimensional flow in a constant area duct is 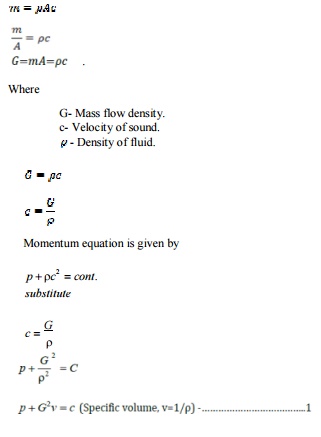 Equation 1 may be used for representing Rayleigh line on the h- s diagram, as illustrated in fig shown in below. In general, most of the fluids in practical use have Rayleigh curves of the general form shown in fig. 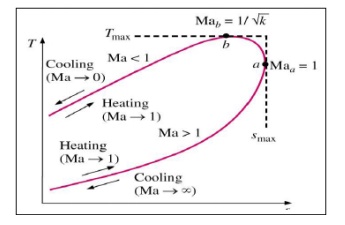 Rayleigh flow refers to adiabetic flow through a constant area duct where the effect of heat addition or rejection is considered. Compressibility effects often come into consideration, although the Rayleigh flow model certainly also applies to incompressible flow. For this model, the duct area remains constant and no mass is added within the duct. Therefore, unlike Fanno flow, the stagnation temperature is a variable. The heat addition causes a decrease in stagnation pressure which is known as the Rayleigh effect and is critical in the design of combustion systems. Heat addition will cause both supersonic and subsonic Mach numbers to approach Mach 1, resulting in choked flow. Conversely, heat rejection decreases a subsonic Mach number and increases a supersonic Mach number along the duct. It can be shown that for calorically perfect flows the maximum entropy occurs at M = 1. Rayleigh flow is named after John Strutt, 3rd Baron Rayleigh. 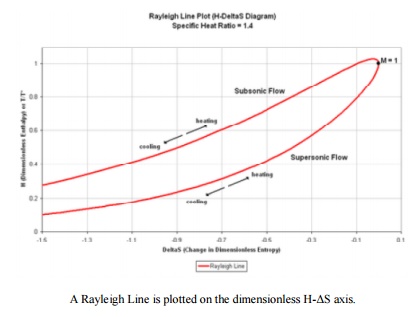 equation is shown below.

Solving the differential equation leads to the relation shown below, where T0* is the stagnation temperature at the throat location of the duct which is required for thermally choking the flow.

The following fundamental equations will be used to determine the variation of flow parameters in Rayleigh flows. 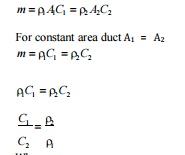 C1 –Velocity of fluid at inlet-m/s

C2 –Velocity of fluid at outlet-m/s

- Density of fluid at inlet-kg/m3

- Density of fluid at out let-kg/m3

The Mach number at the two states are 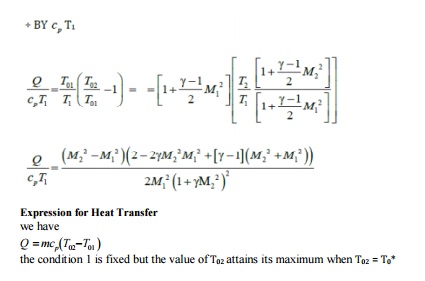 Expression for Heat Transfer we have

Problems based on Rayleigh flow

1.The condition of gas in a combustion chamber at entry are M1=0.28, T01=380 K, P01=4.9 bar. The heat supplied in the combustion chamber is 620 kJ/kg.Determine Mach number, pressure and temperature of the gas at exit and also determine the stagnation pressure loss during heating. Take γ= 1.3, cp=1.22 kJ/Kg K. 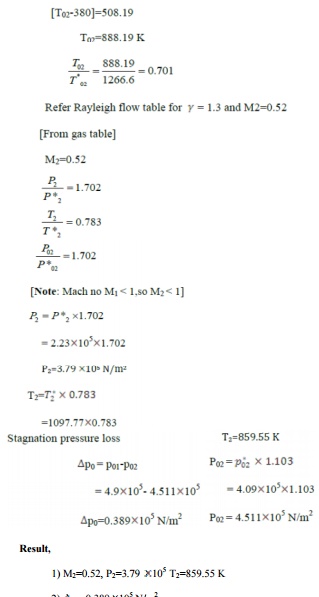