One example of a characterization application is the determination of a sample’s age based on the kinetics for the decay of a radioactive isotope present in the sample.

One example of a characterization application is the determination of a sample’s age based on the kinetics for the decay of a radioactive isotope present in the sample. The most common example is carbon-14 dating, which is used to determine the age of natural organic materials.

The 146C then migrates into the lower atmosphere, where it is oxidized to produce radioactive CO2, which is subsequently incorporated into living organisms. As a result, all living plants and animals have approximately the same ratio of 146C to 126C in their tissues. When an organism dies, however, the radioactive decay of 146C to 147N by  β-emission (t1/2 = 5730 years) results in a gradual reduction in the ratio of 146C to 147C. The change in this ratio can be used to date samples that are as much as 30,000 years old, although the precision of the analysis is best when the sample’s age is less than 7000 years. The accuracy of carbon-14 data is limited by the assumption that the ratio of  146C to 126C has remained constant over time. Some variation in the ratio has occurred as the result of the increased consumption of fossil fuel, and the production of 146C during the testing of nuclear weapons. Correction factors have been de- veloped that increase the accuracy of carbon-14 dating 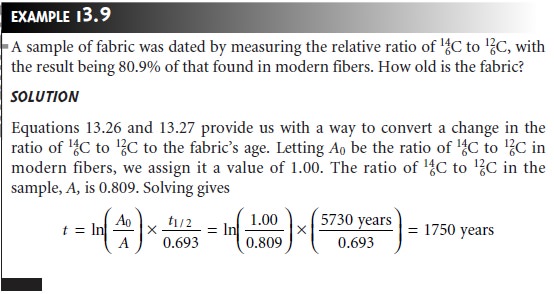 Other  isotopes can be used to determine the age of samples. The age of rocks, for example, has been determined from the ratio of the number of radioactive 23892U atoms to the number of stable 20682Pb atoms produced by radioactive decay. For rocks that do not contain uranium, dating is accomplished by comparing the ratio of radioactive 4019K to the stable 4018Ar. A nother example is the dating of sediments col- lected from lakes by measuring the amount of 21082Pb present.