Every treatment using radiotherapy has to be rigorously planned. The planning process consists of three phases:

The cancerous tumour has to be located so that its size and position can be analysed. This information can be obtained from:

Once the amount of radiation to be given has been accurately calculated, the patient then goes to the simulator to determine what settings are to be selected for the actual treatment using a linear accelerator. The settings are determined by taking a series of x-rays to make sure that the tumour is in the correct position ready to receive the ionising radiation.

Cancerous tumours can be treated using radiotherapy as follows:

•         The cobalt source is kept within a thick, heavy metal container. 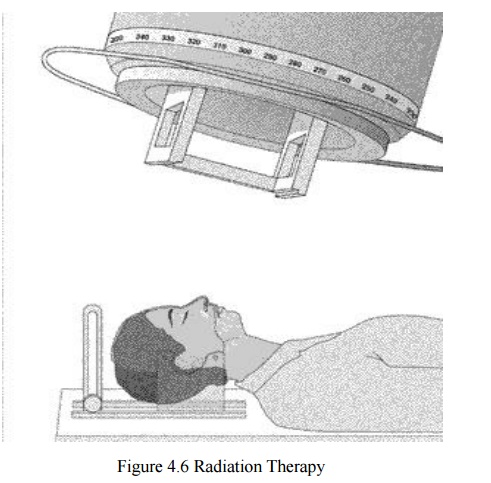 •         The linac fires high energy electrons at a metal target and when the electrons strike the target, x-rays are produced.

•         The apparatus is arranged so that it can rotate around the couch on which the patient lies.

•         This allows the patient to receive radiation from different directions.

•         Treatments are given as a series of small doses because cancerous cells are killed more easily when they are dividing, and not all cells divide at the same time – this reduces some of the side effects which come with radiotherapy.

This involves placing implants in the form of seeds, wires or pellets directly into the tumour.

•         Such implants may be temporary or permenant depending on the implant and the tumour itself.

•         The benefit of such a method is that the tumour receives nearly all of the dose whilst healthy tissue hardly receives any.

Brachytherapy is used to treat the following cancers

There are many uses of ionising radiation based on the fact that it is easy to detect. In such applications, the radioactive material is used in the form of a tracer.In nuclear medicine, a tracer is a radioactive substance which is taken into the body either, as an injection, or as a drink. Such a substance is normally a gamma emitter which is detected and monitored. This gives an indication of any problems that may be present in body organs or tissues by how much, or how little, of the substance has been absorbed.

It is important to be able to study internal organs, or tissues, without the need for surgery. In such cases, radioactive tracers can be injected into the body so such studies can take place. The path of these tracers can be detected using a gamma camera because of their radioactivity.

Such tracers consist of two parts:

•         A drug which is chosen for the particular organ that is being studied.

Factors Which Affect the Choice of Tracer

•         They emit gamma rays which will be detected outside the body.

•         Gamma rays are chosen since alpha and beta particles would be absorbed by tissues and not be detected outside the body.

The tracer is injected into the patient. The radiation emitted from the patient is detected using a gamma camera.A typical gamma camera is 40 cm in diameter – large enough to examine body tissues or specific organs. The gamma rays are given off in all directions but only the ones

which travel towards the gamma camera will be detected.

•         The collimator is usually made of lead and it contains thousands of tiny holes.

•         Only gamma rays which travel through the holes in the collimator will be detected.

•         The detector is a scintillation crystal and is usually made of Sodium Iodide with traces of Thallium added.

•         The detector is a scintillation crystal and it converts the gamma rays that reach it into light energy.

•         The electronic systems detect the light energy received from the detector and converts it into electrical signals.

•         There is a time delay between injecting the tracer and the build-up of radiation in the organ.

Static studies are performed on the brain, bone or lungs scans

•         The amount of radioactive build-up is measured over time.

•         Dynamic studies are performed on the kidneys and heart.

•         Renograms are dynamic images of the kidneys and they are performed for the following reasons:

•         The radioactive material is removed from the bloodstream by the kidneys.

•         Within a few minutes of the injection, the radiation is concentrated in the kidneys.

•         The computer adds up the radioactivity in each kidney and the bladder. 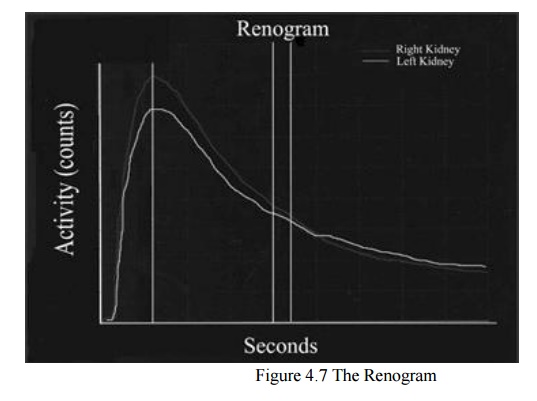 This kills any germs o r bacteria but does not damage the syringe, nor make it radioactive.