In general, ionizing radiation is harmful and potentially lethal to living beings but can have health benefits in radiation therapy for the treatment of cancer and thyrotoxicosis.

In general, ionizing radiation is harmful and potentially lethal to living beings but can have health benefits in radiation therapy for the treatment of cancer and thyrotoxicosis.

Most adverse health effects of radiation exposure may be grouped in two general categories:

·        Deterministic effects (harmful tissue reactions) due in large part to the killing/ malfunction of cells following high doses; and

Its most common impact is the stochastic induction of cancer with a latent period of years or decades after exposure. The mechanism by which this occurs is well understood, but quantitative models predicting the level of risk remain controversial. The most widely accepted model posits that the incidence of cancers due to ionizing radiation increases linearly with effective radiation dose at a rate of 5.5% per sievert. If this linear model is correct, then natural background radiation is the most hazardous source of radiation to general public health, followed by medical imaging as a close second. Other stochastic effects of ionizing radiation are teratogenesis, cognitive decline, and heart disease.

Beneficially, controlled doses are used for medical imaging and radiotherapy, and some scientists suspect that low doses may have a mild hormetic effect that can improve health, but the US National Academy of Sciences Biological Effects of Ionizing Radiation Committee "has concluded that there is no compelling evidence to indicate a dose threshold below which the risk of tumor induction is zero

·        Medical use of rad iation based on the fact that that it can dest roy cells (instrument sterilisation, treatm ent of cancer) 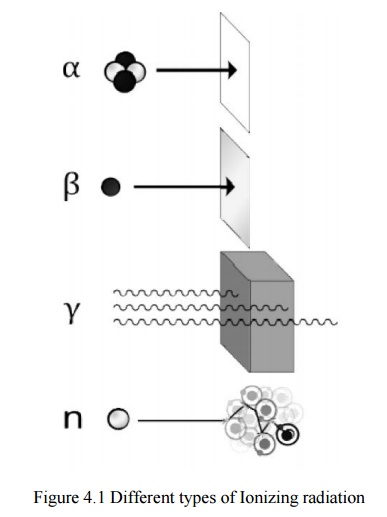 Alpha (α) radiation cons ists of a fast-moving helium-4 (4He) nucleus and is stopped by a sheet of paper. Beta (β) radiation, consisting of electrons, is halted by an aluminium plate. Gamma (γ) radiation, consistingg of energetic photons, is eventually absorbed as it penetrates a dense material. Neutron (n) radiation consists of free neutrons that are blocked using light elements, like hydrogen, which slow and/or capture them. Not shown: gala ctic cosmic rays that consist of energetic charged nu clei like protons, helium nuclei, and high-charged nuclei called HZE ions.

Ionizing radiation is cate gorized by the nature of the particles or ele ctromagnetic waves creating the ionising effect. The se have different ionization mechanisms, an d may be grouped as directly or indirectly ionizing.

Any charged massive particle can ionize atoms directly by funddamental interaction through the Coulomb force if it carries sufficient kinetic energy. This includes atomic nuclei, electrons, muons, charged pions, protons, and energetic charged nuclei stripped of their electrons, all of which must be moving at relativistic speeds to reach the required kinetic energy. The first two to be recognized were given special names, which are used today: Helium nuclei at relativistic speeds are called alpha particles, and electrons at relativistic speeds are called beta particles. Natural cosmic rays are made up primarily of relativistic protons but also include heavier atomic nuclei like helium ions and HZE ions and muons. Charged pions are very short-lived and seen only in large amounts in particle accelerators.

Alpha particles consist of two protons and two neutrons bound together into a particle identical to a helium nucleus. They are generally produced in the process of alpha decay, but may

also be produced in other ways. Alpha particles are named after the first letter in the Greek alphabet, α. The symbol for the alpha particle is α or α2+. Because they are identical to helium

nuclei, theyarealsosometimeswrittenasHe2+or 42He2+indicating a Helium ion with a +2 charge (missing its two electrons). If the ion gains electrons from its environment, the alpha particle can be written as a normal (electrically neutral) Helium atom 42He.

They are a highly ionizing form of particle radiation, and when resulting from radioactive alpha decay have low penetration depth. They can be stopped by a few centimetres of air, or by the skin. However, so-called long range alpha particles from ternary fission are three times as energetic, and penetrate three times as far. The helium nuclei that form 10-12% of cosmic rays are also usually of much higher energy than those produced by nuclear decay processes, and are thus capable of being highly penetrating and able to traverse the human body and dense shielding, depending on their energy.

of radioactive nuclei, such as potassium-40. The production of beta particles is termed beta decay. They are designated by the Greek letter beta (β). There are two forms of beta decay, β−

and β+, which respectively give rise to the electron and the positron.

High-energy beta particles may produce X-rays known as bremsstrahlung ("braking radiation") or secondary electrons (delta ray)as they pass through matter. Both of these can subsequently ionize as an indirect ionization effect.

Positrons may be generated by positron emission radioactive decay (through weak interactions), or by pair production from a sufficiently energetic photon. Positrons are common artificial sources of ionizing radiation in medical PET scans.As positrons are positiv ely charged particles they can also directly ionize an atom through Coulomb interactions. 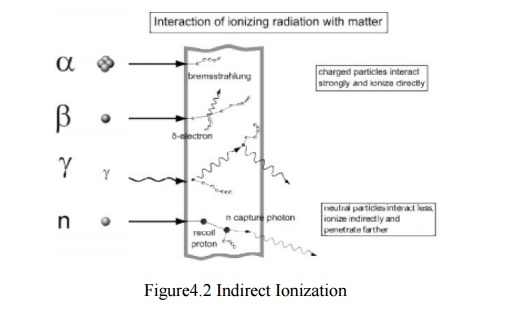 Radiation interaction - gamma rays are represented by wavy lines, charged particles and neutrons by straight lines. The small circles show where ionization occ urs.Indirect ionizing radiation is electrically neutral a nd therefore does not interact strongly with matter. The bulk of the ionization effects are due to secondary ionizations.

Cancers are growths of cells (cancerous tumours) which are out of co ntrol. As a result of this, they do not perform their intended function.

Cancerous tumours can be treated  using the following main methods:

The Aims of Radiation Therapy

•         There is a time delay between injecting the tracer and the build-up of radiation in the organ. Static studies are performed on the brain, bone or lungs scans

•         The amount of radioactive build-up is measured over time.

•         Dynamic studies are performed on the kidneys and heart.

•         Renograms are dynamic images of the kidneys and they are performed for the following reasons:

•         Radiation not only kills cells, it can also kill germs or bacteria.

•         This kills any germs or bacteria but does not damage the syringe, nor make it radioactive.