X- rays are electromagnetic waves X-rays are similar to light and sound waves. But the frequency and wavelength are different.

X- rays are electromagnetic waves X-rays are similar to light and sound waves. But the frequency and wavelength are different.

Where d = distance covered by the electromagnetic wave

·        Electromagnetic waves are not deflected by the magnetic fields.

X rays are produced from the two different types of radiation that are listed above.

1.     When the fst moving electron enters into the orbit of anode material atom, its velocity is continuously decreased due to scattering by the orbiting electrons. Thus the loss of energy of that incident electrons will appear in the form of continuous X rays or white rays.

2.     This type of radiation is used in medical application based on the principle of energy absorption.

1.     It occurs when the incident electron ejects out of the K shell or L shell e- in the anode material atom.Immediately the higher orbit e- will falls into the vacancy to achieve equilibrium. During its transition, the extra energy is emitted in the form of characteristic X ray photon.

X ray output can be obtained when electrons heat the anode

Contrast is measure of the darkness of desired image.

·        The various component in the X ray machine are used to improve the the quality of the image, increase the contrast, improve the resolution size and minimize the dose of X rays used on the patient.

·        The density or darkness of the image is proportional to the amount of X rays that penetrate the film. Contrast is a measure of darkness of the desired image, compare to its surroundings.

·        The good contrast in image will mainly depends on the mass attenuation coefficient.

The emitted X rays wiil contain a broad range of frequency generally the aluminium filters will observe the lower X ray frequency and hence the intensity of low frequency X ray incident on the patient is reduced.

Collimator is placed between the patient and aluminium filter. It is nothing but an aperture . 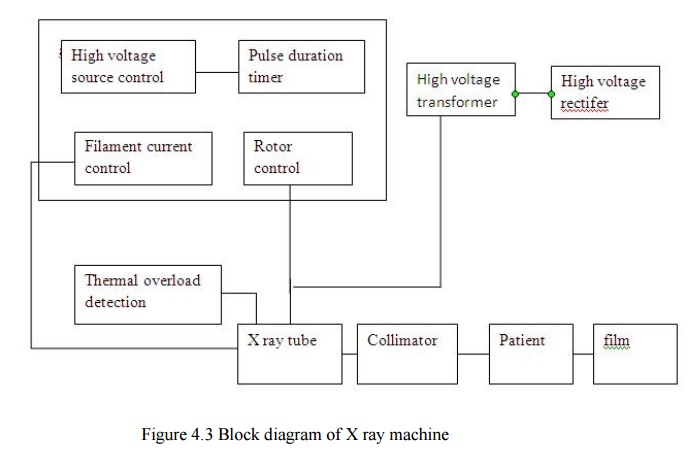 ·        The bucky grid is placed between the patient and the film cassette to improve the sharpness of image.

·        High resolution in images can be obtained

Fluoroscopy is the method that provides real-time X ray imaging that is especially useful for guiding a variety of diagnostic and interventional procedures.

The ability of fluoroscopy to display motion is provided by a continuous series of images produced at a maximum rate of 25-30 complete images per second. This is similar to the way conventional television or video transmits images.

While the X ray exposure needed to produce one fluoroscopic image is low (compared to radiography), high exposures to patients can result from the large series of images that are encountered in fluoroscopic procedures. Therefore, the total fluoroscopic time is one of the major factors that determines the exposure to the patient from fluoroscopy. 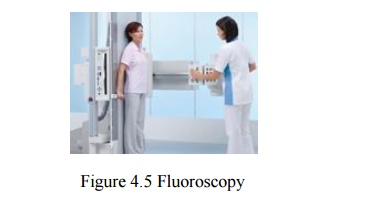 Because the X ray beam is usually moved over different areas of the body during a procedure, there are two very different aspects that must be considered. One is the area most exposed by the beam, which results in the highest absorbed dose to that specific part of the skin and to specific organs.The other is the total radiation energy imparted to the patient’s body, which is related to the Kerma Area Product (KAP or PAK), a quantity that is easily measurable.

The absorbed dose to a specific part of the skin and other tissues is of concern in fluoroscopy for two reasons: one is the need for minimizing the dose to sensitive organs, such as the gonads and breast, by careful positioning of the X ray beam and using shielding when appropriate.The second is the possible incidence of the radiation beam to an area of the skin for a long time that can result in radiation injuries in cases of very high exposure.

On the other hand, the total radiation energy imparted to the patient’s body during a procedure is closely related to the effective dose ) and to the risk of radiation induced cancer.

The use of intensifier tubes and more modern digital flat panel receptors make it possible to optimize the balance of patient exposure with image quality so as not to expose the patient to unnecessary radiation.Non-intensified fluoroscopy with just a fluorescent screen for a receptor should not be used because of the excessive exposure to the patient.

·        Gastro intestinal tract can be imaged by using X ray

·        Angiography is a special X ray imaging technique through which high contrasts can be obtained.

·        The outline of the blood vessels are visible in angiogram

·        Angiocardiography: It mean study of heart