Rabies Virus: Properties of the Virus 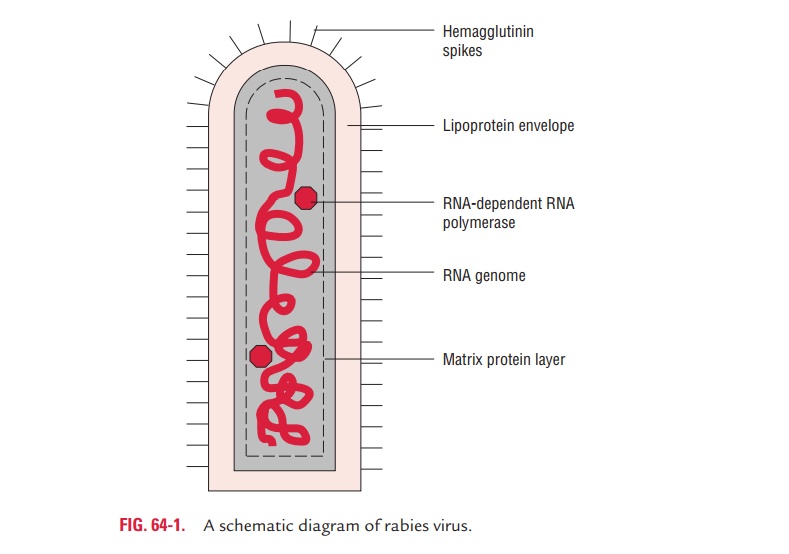 Rabies virus causes rabies, a viral infection of the central and peripheral nervous systems that causes encephalitis with or without paralysis. It is mostly fatal.

Rabies virus causes rabies, a viral infection of the central and peripheral nervous systems that causes encephalitis with or without paralysis. It is mostly fatal.

·           It is composed of an internal protein core or nucleocapsid, which contains the nucleic acid. It also consists of an outer envelope, a lipid-containing bilayer covered with trans-membrane glycoprotein spikes. The nucleocapsid shows helical symmetry, containing a linear negative-sense RNA with an RNA-dependent RNA transcriptase. The virus genome is unsegmented. 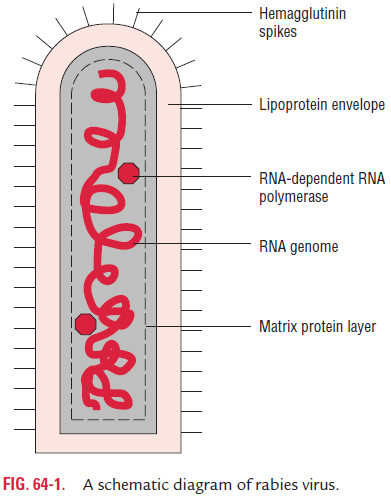 The genome encodes for production of five proteins associ-ated with either the ribonucleoprotein (RNP) complex or the viral envelope. The L (transcriptase), N (nucleoprotein), and NS (transcriptase-associated) proteins comprise the RNP complex, together with the viral RNA. These proteins are aggregated together in the cytoplasm of virus-infected neurons and consti-tute Negri bodies, the characteristic histopathological finding of rabies virus infection. The M (matrix) and G (glycoprotein) proteins are associated with the lipid envelope. The G protein forms the protrusions that cover the outer surface of the virion envelope and is the only rabies virus protein known to induce virus-neutralizing antibody.

Rabies virus replicates in the cytoplasm. It causes infection by combining with the acetylcholine receptor of the cell surface. The virus then enters the cell, uncoats, and the viral RNA polymerase synthesizes five mRNAs that encode viral proteins. The virus-encoded RNA polymerase facilitates the replication of the viral genomic RNA, which is followed by assembly of the genomic RNA with virion proteins to form the nucleocapsid. Finally, the virions bud from plasma membrane by budding through the cell membrane, during which they acquire their envelopes.

G protein: The glycoprotein or G protein is present on thesurface spikes present on the outer lipoprotein envelope of the virion. It mediates the attachment of virus to the acetylcho-line receptors of neural tissues. The G protein is important in pathogenesis and virulence of the virus. It is strongly antigenic and elicits the production of neutralizing antibodies, which are protective. It also induces hemagglutination-inhibiting anti-bodies and stimulates cell-mediated immunity. G protein is a serotype-specific antigen.

N protein: Nucleoprotein or N protein is a group-specificantigen. It shows cross-reaction with some rabies-related viruses. It is antigenic and produces antibodies, which are not protective but are of diagnostic value. These antibodies can be demon-strated by serological tests, such as immunofluorescence (IF) test for the purpose of diagnosis.

Other antigens: These include membrane proteins, glyco-lipid, and RNA-dependent RNA polymerase.

Rabies viruses may be typed as fixed or street viruses. The fixedviruses are the viruses that by several intracerebral passages inanimals or cell culture undergo certain changes, such as they show a fixed incubation period of 6–7 days. The street viruses are those viruses that are isolated from natural human and animal infections and show a variable incubation period of 1–12 weeks.

The monoclonal antibodies and genetic sequencing are now being used to differentiate and type street rabies viruses. Typing of street viruses has been found to be helpful in identifying viral variants originating in major host reservoirs throughout the world. This is also found to be useful to suggest the likely sources of human exposure when a history of definitive animal bite was otherwise missing from a patient’s case history. Differences between fixed and street viruses are summarized in Table 64-1.

Rabies virus possesses hemagglutinating property. The virus agglutinates goose erythrocytes at 0–4°C and at pH 6.2. Rabies virus is sensitive to ethanol, iodine, soap, quaternary ammo-nium compounds, detergents, ether, chloroform, acetone, etc. It is inactivated by formalin, phenol, beta-propiolactone, ultraviolet radiation, and sunlight. It can be inactivated at 50°C for 1 hour or at 60°C for 5 minutes. It can also be inactivated on exposure to CO2. The virus is resistant to drying and cold. It survives at 4°C for weeks; hence viruses can be preserved by storing at 270°C or by lyophilization.