1. If we apply force against the direction of motion of the body, then the body will

b. move with an increased speed

c. move with a decreased speed

d. move in a different direction

2. Pressure exerted by a liquid is increased by

a. the density of the liquid

b the height of the liquid column

3. Unit of pressure is

4. The value of the atmospheric pressure at sea level is

6. Which of the following liquids has more viscosity?

7. The unit of viscosity is

1. The pressure of a liquid column increases with the depth of the column.

2. Hydraulic lift works under the principle of Pascal’s Law.

3. The property of surface tension of a liquid surface enables the water droplets to move upward in plants.

4. A simple barometer was first constructed by Torricelli.

1. Force acting on a given area is called pressure. [Answer: True]

2. A moving body comes to rest due to friction alone. [Answer: True]

3. A body will sink if the weight of the body is greater than the buoyant force. [Answer: True]

4. One atmosphere is equivalent to 1,00,000 newton force acting on one square metre. [Answer: True]

6. Friction is the only reason for the loss of energy. [Answer: True]

7. Liquid pressure decreases with the decrease of depth. [Answer: True]

8. Viscosity depends on the pressure of a liquid. [Answer: True]

Rolling friction - Objects are in motion

Friction between the liquid layers - Objects are sliding

Sliding friction - Objects are at rest

i. Static friction (e) objects are at rest

iv. Friction between the liquid layers (a) viscosity

i. Barometer (b) atmospheric pressure

1. A stone weighs 500 N. Calculate the pressure exerted by it, if it makes contact with a surface of area 25 cm2.

According to Pascal’s law

VII. Consider the statements given below and choose the correct option.

a. Both assertion and reason are true and reason is the correct explanation of assertion.

b. Both assertion and reason are true, but reason is not the correct explanation of assertion.

c. Assertion is true, but reason is false.

d. Both assertion and reason are false.

1. Assertion: Sharp knives are used to cut the vegetables.

[Answer: (a) Both assertion and reason are true and the reason is the correct explanation of the assertion]

[Answer: (b) Both assertion and reason are true, but the reason is not the correct explanation of the assertion]

Correct explanation: The weight of the bags falls on larger area of shoulder. So lesser pressure is produced.

3. Assertion: Water strider slides easily on the surface of water.

[Answer: (b) If both assertion and reason are true, but reason is not the correct explanation of assertion]

Correct explanation: It is due to the surface tension of water.

1. Give two examples to verify that a force changes the shape of a body.

Force can change the static condition of a body.

(i) If you squeeze a sponge, its shape changes.

(ii) If you pull a rubber band, it becomes longer.

2. Give two examples to verify that a force tends to change the static condition of a body.

Answer: Force can change the static condition of a body.

(i) A rest rubber ball begins to move, when a force applied on it.

(ii) Player applies a force on the stationary football while taking a penalty kick in football match. The force applied by player makes the football move towards the goal.

3. How do you feel when you touch a nail immediately after it is hammered into a wooden plank? Why?

4. How does the friction arise between the surfaces of two bodies in relative motion?

Answer: The force of friction is arised by the interlocking of the irregularities of the two surfaces.

5. Name two instruments which help to measure the pressure of a fluid.

Answer: The pressure exerted by the mercury column is considered as the pressure of magnitude ‘one atmosphere’ (1 atm).

7. Why are heavy bags provided with broad straps?

Answer: Broader straps are provided on a back-pack for giving less pressure on the shoulders by providing a larger area of contact with the shoulder.

8. How does surface tension help a plant?

9. Which has greater viscosity, oil or honey? Why?

Reason: Thicker liquids are more viscous than thinner liquids. As honey has greater viscosity, more frictional force will be acting on it.

1. Define friction. Give two examples of the utility of friction in day to day life.

Friction : Friction is a force that slows down moving objects or prevents stationary objects from moving.

Examples of the utility of friction in day to day life.

(i) Cars and buses are able to move safely on the road because of friction between the treaded tyres and the surface of the road.

(ii) We are able to write on paper only with the help of friction between the pencil or pen and paper.

(i) By using lubricants : These are applied to surfaces to reduce the friction between the surfaces.

(ii) With the help of polishing the surface :

We sprinkle fine powder on the carrom board and then we polish its surface to make smooth so that the striker slides easily on the surface.

We use leadshots in bearing of a cycle hub because rolling friction is smaller than sliding friction.

(i) In an automobile service station, the vehicles are lifted upward using the hydraulic lift, which works as per Pascal’s law.

(ii) The automobile brake system works according to Pascal’s law.

(iii) The hydraulic press is used to make the compressed bundles of cotton or cloth so as to occupy less space.

4. Why is a ball bearing used in a cycle hub?

Answer: The rolling friction is smaller than sliding friction, sliding is replaced by rolling with the usage of ball bearings. So lead shots are used in the bearing of a cycle hub to reduce the friction.

1. Friction is a necessary evil - Explain.

Friction is a necessity in most of our day to day activities. It is desirable in most situations of our daily life.

(i) We can hold any object in our hand due to friction.

(ii) We can walk on the road because of friction. The footwear and the ground help us to .walk without slipping.

(iii) Writing easily with a pen on paper is due to friction.

(v) We are able to light a matchstick, sew clothes, tie a knot or fix a nail in the wall because of friction.

Though it is giving a negative effect, in most of our day to day life friction helps us to make our life easy. So, it is called as “necessary evil”.

(i) Friction wears out the surfaces rubbing with each other, like screws and gears in machines or soles of shoes.

(ii) To overcome the friction an excess amount of effort has to be given to operate a machine. This leads to wastage of energy.

2. Give the different types of friction and explain each with an example.

Friction can be classified into two basic types:

(i) Static friction: The friction experienced by the bodies, which are at rest is called static friction. (E.g : All the objects rigidly placed to be at rest on the Earth, a knot in a thread.)

Further, kinetic friction can be classified into two:

(ii) Rolling friction: When a body rolls over another surface, the friction acting between the surfaces in contact is called rolling friction.

Rolling friction is less than sliding friction. That is why wheels are provided in vehicles, trolleys, suitcases etc.

3. Describe an experiment to prove that friction depends on the nature of a surface.

To understand about the frictional force between the layers of liquid in motion.

(i) Take a small quantity of different kinds of liquid like coconut oil, honey, water and ghee etc., in a cup.

(ii) Place one drop of each liquid on a separate glass plate.

(iii) Next, gently raise one end of the glass plate, one by one, so as to allow the liquid to slide down the smooth surface of the plate.

(iv) Observe the speed of each liquid.

4. Explain how friction can be minimised.

(1) A substance, which reduces the frictional force, is called a lubricant.

(2) The lubricants fill up the gaps in the irregular surfaces between the bodies in contact. This provides a smooth layer thus preventing a direct contact between their rough surfaces.

Since, the rolling friction is smaller than sliding friction, sliding is replaced by rolling with the usage of ball bearings. We can see lead shots in the bearing of a cycle hub.

5. Describe an experiment to prove that the pressure in a liquid increases with depth.

Answer: Take a plastic bottle. Punch three holes on its side in the same direction, but at different heights. Now pour some water into it and let it flow through the holes. Observe the flow of water. 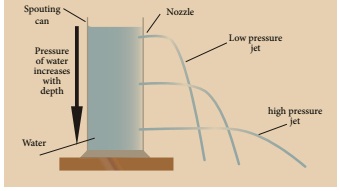 Reason: This activity confirms that the pressure in a liquid varies with the depth of the point of observation in it.

1. Why is it not advisable to use a fountain pen while travelling in an aeroplane?

2. Is there any possibility of making a special device to measure the magnitude of friction directly?

Answer: Yes. Tribometer is a special device to measure the magnitude of friction directly.

3. Vidhya feels that mercury is costly. So, instead of mercury she wants to use water as a barometric liquid. Explain the difficulty of constructing a water barometer.

(i) Mercury is commonly used in barometers because of its high density means the height of the column can be a reasonable size to measure atmospheric pressure.

(ii) A barometer using water, for instance, would need to be 13.6 times taller than a mercury barometer to obtain the same pressure difference.

(iii) This is because mercury is 13.6 times more dense than water.

Observe the devices, gadgets or things around you. List out the types of friction involved in each device. How would you minimise the friction? Record your observations and discuss your results with your classmates.