• Force acting on a body tends to change its state of rest or of motion or its shape. The SI unit of force is newton.

• Force acts only when two or more objects interact with one other.

• The effect of force can be measured using the physical quantity called pressure.

• All objects on the surface of the Earth experience a constant thrust or force due to the atmosphere.

• Atmospheric pressure can be measured by a device called barometer.

• Friction is the force that opposes the motion of an object.

• Friction is caused by irregularities on the surfaces, which are in contact.

• Friction depends on the nature of the surfaces and mass of the bodies in contact.

• Surface tension is the tendency of liquid surfaces to shrink to have minimum surface area as mush as possible.

• When liquids are flowing there is a frictional force between the layers of the liquid, which oppose their relative motion. This force is called viscous force and the phenomenon is known as viscosity.

• Viscosity is measured by the unit called poise in CGS system and kgm–1s–1 and Nsm–2 in SI.

Buoyant force An upward force exerted by liquid on a floating body.

Force - Ation of push or pull.

Friction - Force produced due to the geometrical dissimilarities of the surface of the bodies which are in relative motion.

Surface tension Force which contracts the surface area of the liquids.

Thrust - Force acting perpendicularly on any given surface area. 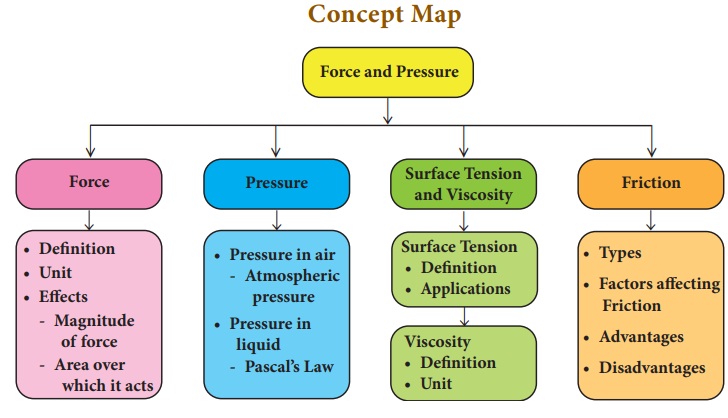 * Open the Browser and type the URL link given below (or) Scan the QR Code.

* Select the “Fluid Pressure and Pascal’s Law” .You can view this page.

* You can view this page .Touch the play button.

* To get more idea about the Pascal’s Law for fluid pressure through Experiment.