1. Which one the following systems of unit is the British System of unit?

4. Amount of substance is

(a) directly proportional to the number of atoms

(b) inversely proportional to the number of atoms

(c) directly proportional to the square of number of atoms

(d) inversely proportional to the square of number of atoms

[Answer: (a) directly proportional to the number of atoms]

7. Which one of the following statement is wrong?

b. Approximation simplifies the calculation.

c. Approximation is very useful when little information is available.

1. The solid angle is measured in steradian.

2. The coldness or hotness of a substance is expressed by temperature.

5. The uncertainty in measurement is called as error.

6. The closeness of the measured value to the original value is Accuracy.

7. The intersection of two straight lines gives us plane angle.

1. Temperature is a measure of total kinetic energy of the particles in a system. [Answer: False]

Correct statement: Temperature is a measure of average kinetic energy of the particles in a system.

2. If one coulomb of charge is flowing in one minute, it is called ‘ampere’. [Answer: False]

Correct statement: One coulomb of charge flowing per second is called ‘ampere’.

3. Amount of substance gives the number of particles present in a substance. [Answer: True]

4. Intensity of light coming from a candle is approximately equal to one ‘candela’. [Answer: True]

6. Angle formed at the top of a cone is an example for ‘plane angle’. [Answer: False]

1. Temperature Closeness to the actual value

4. Accuracy - Angle formed by the intersection of three or more planes

5. Precision - Angle formed by the intersection of two planes

1. Temperature (b) Measure of hotness or coldness

3. Solid Angle (d) Angle formed by the intersection of three or more planes

4. Accuracy (a) Closeness to the Actual Value

V.  Consider the statements given below and choose the correct option.

a. Both assertion and reason are true and reason is the correct explanation of the assertion.

b. Both assertion and reason are true but reason is not the correct explanation of the assertion.

c. Assertion is true, but reason is false.

d. Both assertion and reason are false.

1. Assertion: The SI system of units is the suitable system for measurements.

Reason: The SI unit of temperature is kelvin.

[Answer: (b) both assertion and reason are true but reason is not the correct explanation ' of the assertion]

Correct explanation: In SI system the units are precisely defined and have the same value everywhere.

Reason: They are independent of each other.

[Answer: (a) both assertion and reason are true and reason is the correct explanation of the assertion]

3. Assertion: Radian is the unit of solid angle.

Reason: One radian is the angle subtended at the centre of a circle by an arc of length equal to its radius.

[Answer: ★ Assertion is false, but reason is true]

Correct explanation: Radian is the unit of plane angle.

1. How many base quantities are included in SI system?

2. Give the name of the instrument used for the measurement of temperature.

3. What is the SI unit of luminous intensity?

4 What type of oscillations are used in atomic clocks?

5. Mention the types of clocks based on their display.

6. How many times will the ‘minute hand’ rotate in one hour?

7. How many hours are there in a minute?

Answer: Measurement is the process of finding an unknown physical quantity by using a standard quantity.

Answer: Temperature is a measure of the average kinetic energy of the particles in a system.

Answer: One ampere is defined as one ‘coulomb’ of charge moving in a conductor in one second.

4. What is electric current?

Answer: The magnitude of an electric current is the amount of electric charges flowing through a conductor in one second.

5. What do you mean by luminous intensity?

Answer: The measure of the power of the emitted light, by a light source in a particular direction, per unit solid angle is called as luminous intensity.

7. What are the differences between plane angle and solid angle?

• Angle between the intersection of two lines or planes.

• It is two dimensional

• Angle between the intersection of three or more planes at a common point.

• It is three dimensional.

Answer: Base Quantities and Units:

2. Write a short note on different types of clocks.

Answer: Types of clocks based on display:

(i) Analog clocks : It looks like a classic clock. It has three hands to show the time. 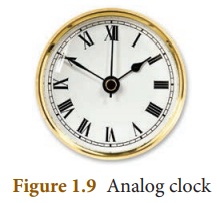 (3) Seconds Hand : It is long and very thin. It shows ‘second’. It makes one rotation in one minute and 60 rotations in one hour.

Analog clocks can be driven either mechanically or electronically.

(1) A digital clock displays the time directly. It show's the time in numerals or other symbols. It may have a 12 hours or 24 hours display. 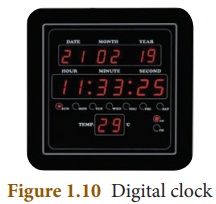 Different types of clocks based on working mechanism :

(1) These clocks are activated by ‘electronic oscillations’, which are controlled by a ‘quartz crystal’. 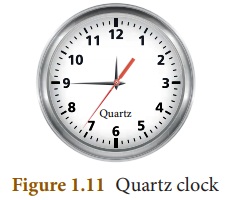 (2) The frequency of a vibrating crystal is very precise. So, the quartz clock is more accurate than the mechanical clock.

(3) These clocks have an accuracy of one second in every 109 seconds.

(1) These clocks are making use of periodic vibrations occurring within the atom.

(2) These clocks have an accuracy of one second in every 1013 seconds. 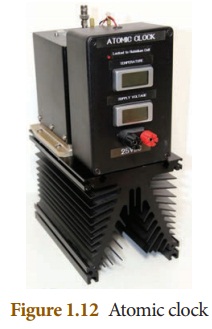 1. Your friend was absent to school yesterday. You are enquiring about his absence. He told that he had fever and it was measured to be 100°C. Is it possible to have 100°C fever? If he is wrong, try to make him understand.