Pseudomonas aeruginosa: Properties of the Bacteria

P. aeruginosa is the most important species associated withhuman infection. It is a most common human saprophyte, but it rarely causes disease in healthy individuals. P. aeruginosa causes most of human infections in immunocompromised human host.

P. aeruginosa is the most important species associated withhuman infection. It is a most common human saprophyte, but it rarely causes disease in healthy individuals. P. aeruginosa causes most of human infections in immunocompromised human host.

·           Pseudomonas spp. is noncapsulated. Although the bacteria arenoncapsulated, many strains appear mucoid by production of an abundant of extracellular polysaccharide composed of alginate polymers. This slime layer forms a loose capsule or glycocalyx around the bacillus. These strains are particularly isolated from patients with cystic fibrosis.

1.        Nutrient agar: P. aeruginosaafter incubation for 24 hoursat 37°C on nutrient agar produces large (2–3 mm in diam-eter), opaque, translucent, and irregularly round colonies. These colonies emit a characteristic musty to fruity odor due to production of aminoacetophenone from the amino acid tryptophan. It produces hemolytic colonies on blood agar.

4.        Nutrient broth: In nutrient broth, it produces a denseturbidity with surface pellicle.

aeruginosa produces different types of pigments, such as (a)pyocyanin, (b) pyoverdin, (c) pyorubin, and (d) pyomelanin. However, some strains of Pseudomonas are not pigmented.

·             Pyocyanin is specifically produced byP. aeruginosa,whichdiffuses into the surrounding medium (Fig. 37-1). The pigment is soluble in chloroform and water.

·           Pyoverdin, or fluorescein, is produced byP. aeruginosaas well as by many other Pseudomonas species. These pigments give a yellow tinge to the colonies of bacteria and are best demonstrated in microscope using ultravi-olet source of light. Fluorescein is soluble in water, but insoluble in chloroform.

·           Pyorubin is a red pigment, which is soluble in water butinsoluble in alcohol.

·      They are nonfermentative bacteria. They utilize sugars by an oxidase metabolism, with oxygen as the termi-nal electron acceptor. Special media, such as oxidation-fermentation (OF) media, are used to demonstrate the low quantity of acid produced during oxidative breakdown of sugars. P. aeruginosa utilizes glucose, forming acid only (Color Photo 38).

·      They do not utilize lactose and maltose.

·      They reduce nitrates to nitrite, which is further broken down to gaseous nitrogens.

·      They are arginine dihydrolase positive. 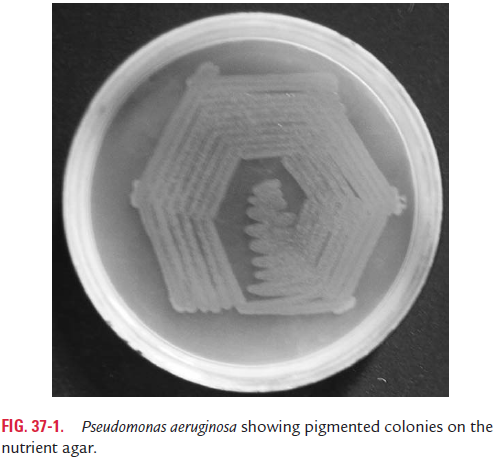 Susceptibility to physical and chemicals agents: P. aeruginosais heat-labile bacterium, readily killed at 55°C in 1 hour. It is also highly susceptible to acid, silver salts, 2% alkaline, glutaralde-hyde, and disinfectants (such as Dettol and cetrimide). However, P. aeruginosa is very strongly resistant to common antisepticsand disinfectants, such as chloroxylenol, hexachlorophene, and quaternary ammonium compounds