Project, Connecting to Self, Steps to Success

F. Collect any three pictures of your favourite cartoon characters and get them pasted in your class work. Write a few lines about them.

1. Mickey Mouse is a funny animal cartoon character and the mascot of The Walt Disney Company. He was created by Walt Disney and Ub Iwerks in 1928. An anthropomorphic mouse who typically wears red shorts, large yellow shoes, and white gloves, Mickey is one of the world's most recognizable characters. He appeared in over 130 films. Beginning in 1930, Mickey has also been featured extensively as a comic strip character. 90th Anniversary of Mickey Mouse has been celebrated on November 18, 2018 around the World.

2. Donald Duck is a cartoon character created in 1934 at Walt Disney Productions. Donald is an anthropomorphic white duck with a yellow-orange bill, legs, and feet. He typically wears a sailor shirt and cap with a bow tie. Donald is most famous for his semi-intelligible speech and his mischievous and temperamental personality. Along with his friend Mickey Mouse, Donald is one of the most popular Disney characters and was included in TV Guide's list of the 50 greatest cartoon characters of all time in 2002.

3. Scoobert "Scooby" Doo is the eponymous character and protagonist of the animated television franchise of the same name created in 1969 by the American animation company Hanna-Barbera. Scooby-Doo is a male Great Dane and lifelong companion of amateur detective Shaggy Rogers, with whom he shares many personality traits. He features a mix of both canine and human behaviors, treated by his friends more or less as an equal while speaking in a famous speech impediment. His catchphrase is "Scooby-Dooby-Doo!"

Read the following and have a discussion on which of these are fair and ethical to laugh at and which are not. Why? 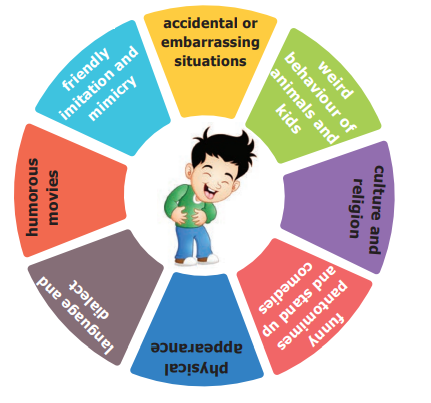 In a certain code ‘extremely’ is written as X KDLDQSWD. ) Figure out the code and rewrite the following words in the same code.

Key to solve the puzzle :

2. Write the given word.

3. Reverse the letters in this word.

4. For each letter write the previous letter in front of it.

Follow the same procedure to write the code of other letters also. 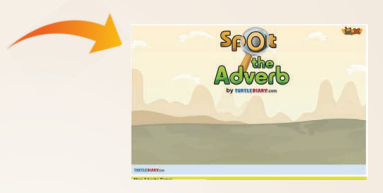 Steps to Play the Game

1. Scan the QR or click the URL and open the game in the browser.

3. Read the inﬆruction given in ‘How to Play’.

4. Help the rabbit collect more and more gold coins by identifying the adverbs.

* Read a piece of article or the prose piece and pick out the adverbs.

* Write your own sentences using the adverbs.

* To know the adverbs.

* To use the adverbs in sentences.