This has got to stop immediately, Justice Mathematics said in a stern voice, rapping the hammer for silence in the court.

He pushed back the horn-rimmed glasses up his nose and glared first at Mahesh and then at the crowd in the court. Everybody respected him, even Mahesh, so a pin-drop silence fell in the court instantly. 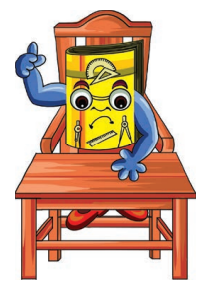 “Your witness, first," he gestured at the torn Ms. English. Mahesh chewed his nails nervously.

“Your Honour," began the lady, in a trembling voice, " when I came to this house, I wore a lovely pink and grey dress, shiny and unmarked. And, Sir, just look at me now." 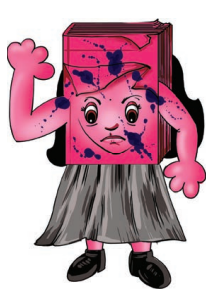 Everybody gazed at her. Her dress was unrecognizable. Covered with ink and grease spots, mercilessly dog-eared and two corners chewed away, she looked a wreck. Tears rolled down Ms. English's cheeks.

Offering her a handkerchief, Justice Mathematics asked gently, " How did it happen, Ms. English?"

“Well," sniffed Ms. English, " this boy," she pointed at Mahesh, " brought me home a few months back but never bothered to cover me properly with the nice brown paper his father had brought."

“Did Mahesh not get scolded and punished in school for that? Justice Mathematics enquired.

“Oh, yes, he was, repeatedly," said Ms. English in a tearful voice, " but all the punishment and scolding slipped off him like water off a duck's back!Not only did he ruin my looks," she continued, " he also ill-treated me."

The audience was stunned, ill-treating a delicate creature like Ms. English! How terrible! By now tears had started rolling down Ms. English's big eyes. And stopping only to sniff delicately in her handkerchief, she told everyone about how Mahesh dropped her carelessly, stuffed her anyhow in his crammed bag, sometimes next to the lunch box dripping with oil! Mahesh turned red as many pairs of eyes glared at him. Oh! Why had he not listened to his mother, who had told him many times to take care of his books! He was otherwise a good boy and even managed to stay within the first five ranks inclass. But he was extremely lazy.

“Mahesh!” the stentorian voice of Justice Mathematics brought him back to reality. “What do you have to say for yourself?”

Mahesh managed to mumble an apology, " I am sorry, Sir!"

“What do you mean by saying sorry ? screamed Justice Mathematics. “You have to undo what you have done. Do you understand?" He looked above the top of his glasses and seemed as if he would like to bite Mahesh. " Next!" he barked at the peon.

Mr. Geography stood up shakily and went to the witness box. He was in a worse condition than Ms. English. He had no cover, the 'Contents' page was hanging in on its last threads but the worst part were the maps. They had been filled in mercilessly with all the colours in the paint box! 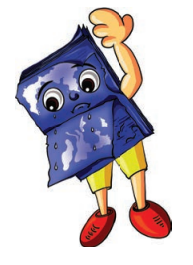 “My story is quite similar to Ms. English's," Mr. Geography said in a broken voice. " All my fellow brothers laugh at me whenever Mahesh pulls me out of his bag. I especially envy my brother who belongs to Shobitha. She has not only covered him neatly, her handling is so gentle that he always looks as if he has just stepped out of the bookseller's shop, and," he added, " she fills in her maps with a pencil!"

And so it went on with all the books, copies, pencil box and even the school bag complaining about Mahesh's negligence. They looked battered and the worse for wear.Justice Mathematics face became dark when he heard that Mahesh tore off pages from the copies to make paper planes. Mahesh withered under his murderous look.

Mr. Pencil Box complained that Mahesh never cleaned it. As a matter of fact, he had covered the court floor with pencil shavings the moment he had stood up as awitness and accidentally opened himself! This was not all. Mahesh chewed him whenever he got stuck for an answer! He pointed at his pock-marked body for everyone to see. 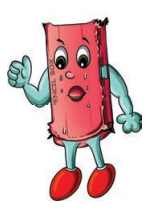 The elderly and ponderous Mr. School Bag lumbered to the witness box with his broken straps and buckles dragging behind him.

“I might as well be a sack of cement," he began in a grave voice, " as that is how I am treated. Mahesh never packs me the night before as all sensible children do, but leaves it till the very last moment. And then, naturally there isn't any time to do anything but cram everything in anyhow. With the result, neither my friends inside nor I am happy." 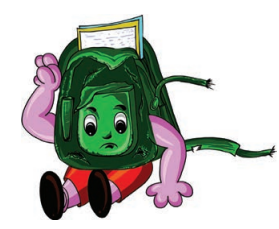 “Your Honour!" piped a small voice, " I also want to say something.”Justice Mathematics looked carefully and found that the voice belonged to a small notebook, much in the same condition as others.

“The young Master Notebook marched to the witness box and took the oath, " Your Honour, it has become a regular practice and I don't know how long I will be able to bear it..." he stopped, all choked up.

“The Master Notebook got hold over himself and continued, " It started a few weeks back. Mahesh was solving some problems in Mathematics, one of them was tougher than others and he failed to solve it. an you imagine how he vented his anger? Well, he threw me against the wall!" 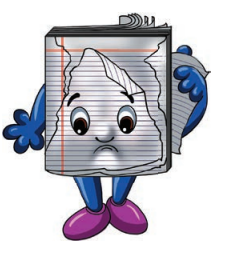 A shock wave rent the courtroom and everybody started talking at once. Justice Mathematics went red with anger as he banged the hammer loudly, and you could see that he was wishing that the table were Mahesh. Mahesh, meanwhile, stared at his boots. Was he really that cruel? He felt really ashamed of himself.

“I intensely dislike such children who do not take proper care of their books, Justice Mathematics said in a serious voice, all the while eyeing Mahesh sternly.

“However, this court is different from the other courts. Here the punishment is decided by the victims and we decide by majority if the verdicts are more than one."

He looked at all the bedraggled books and notebooks, pencils and pencil box, and the school bag in the court. 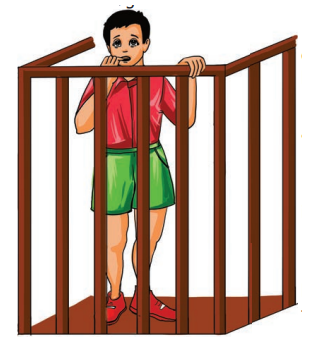 They, in turn looked at Mahesh, each and every one of them in terrible anger. Mahesh trembled in his shoes.

“Let us thrash him first and then throw him against the wall as he threw me!" this was the Master Notebook, his voice shrill with fury.

“No! No! Let us all bite him and let him see how it feels to be chewed!" This obviously was Mr. Pencil Box.

He became so agitated that he once again opened himself and spilled some more pencil shavings on the floor!

“I suggest dragging him around the courtroom a dozen times will be a good punishment," said Mr. School Bag.

“Why don't we all jump on him together till he yells for mercy?" exclaimed Mr. Geography, rubbing his hands in anticipation.

This appealed to all of them and even Justice Mathematics got up from his chair to join the gang! Menacingly they all advanced towards Mahesh, who looked around frantically for somewhere to run to, somewhere to hide... Nothing! There was no place to run to! The mob was almost upon him when a soft voice rose above the frightening silence.

“I say, stop it! Please, do stop!" Amazed, everybody turned around, even Mahesh opened his eyes a crack which he had shut in fright. Then the petite Ms. English rose from her seat and spoke to Justice Mathematics in a firm voice, don t mean to interrupt, Your Honour, it is just that I feel that everyone deserves a second chance and, after all, this is Mahesh's first offence, he deserves a little consideration."

Mahesh looked at her in admiration, he could have hugged her! She was the one who had been treated most shamefully by him and look at her! Standing so staunchly by him! The others too saw reason and slowly backed off, agreeing to give Mahesh a second chance, Mahesh, see that you never ill treat a book again!” was Justice Mathematics’ parting shot.

“Mahesh! Mahesh!" a hand started to shake him and he jumped.

Had the others changed their minds about not punishing him?

Yes! There was the battered bag on the floor, the books, half on the floor and others stuffed in the bag. But what was this? The English book was lying near his pillow and seemed to smile at him! Mahesh's mother was astonished to see him rushing through the chores and then sitting down to glue and cover his English book that very morning! Next year Mahesh Kumar got the prize for the ‘Best Looked-After Books’.