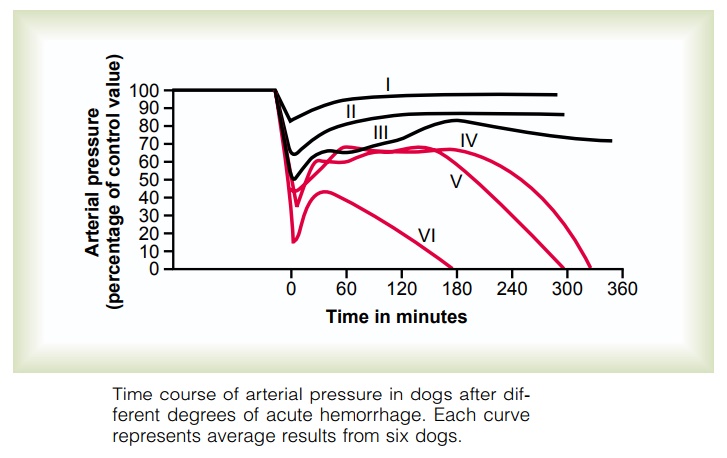 Figure 24–2 shows an experiment that we performed in dogs to demonstrate the effects of different degrees of sudden acute hemorrhage on the subsequent course of arterial pressure.

Figure 24–2 shows an experiment that we performed in dogs to demonstrate the effects of different degrees of sudden acute hemorrhage on the subsequent course of arterial pressure. The dogs were bled rapidly until their arterial pressures fell to different levels. Those dogs whose pressures fell immediately to no lower than 45 mm Hg (groups I, II, and III) all eventually recovered; the recovery occurred rapidly if the pres-sure fell only slightly (group I) but occurred slowly if it fell almost to the 45 mm Hg level (group III). When the arterial pressure fell below 45 mm Hg (groups IV, V, and VI), all the dogs died, although many of them hovered between life and death for hours before the circulatory system deteriorated to the stage of death.

This experiment demonstrates that the circulatory system can recover as long as the degree of hemor-rhage is no greater than a certain critical amount. Crossing this critical threshold by even a few milliliters of blood loss makes the eventual difference between life and death. Thus, hemorrhage beyond a certain crit-ical level causes shock to become progressive. That is, the shock itself causes still more shock, and the condi-tion becomes a vicious circle that eventually leads to deterioration of the circulation and to death. 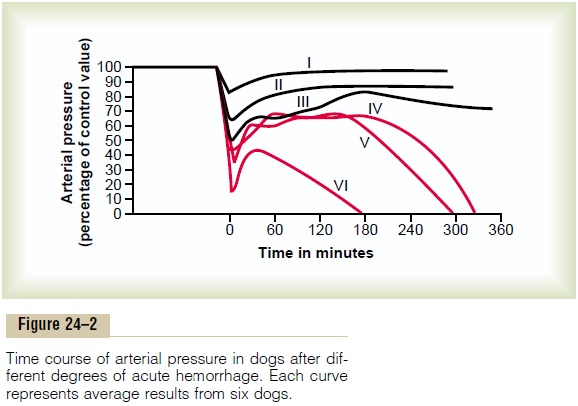 If shock is not severe enough to cause its own pro-gression, the person eventually recovers. Therefore, shock of this lesser degree is called nonprogressive shock. It is also called compensated shock, meaningthat the sympathetic reflexes and other factors com-pensate enough to prevent further deterioration of the circulation.

The factors that cause a person to recover from moderate degrees of shock are all the negative feed-back control mechanisms of the circulation that attempt to return cardiac output and arterial pressure back to normal levels. They include the following:

1.     Baroreceptor reflexes, which elicit powerfulsympathetic stimulation of the circulation.

2.  Central nervous system ischemic response, which elicits even more powerful sympathetic stimulation throughout the body but is not activated significantly until the arterial pressure falls below 50 mm Hg.

4.     Formation of angiotensin by the kidneys, whichconstricts the peripheral arteries and also causes decreased output of water and salt by the kidneys, both of which help prevent progression of shock.

5.     Formation of vasopressin (antidiuretic hormone) by the posterior pituitary gland, which constrictsthe peripheral arteries and veins and greatly increases water retention by the kidneys.

6.     Compensatory mechanisms that return the blood volume back toward normal, including absorptionof large quantities of fluid from the intestinal tract, absorption of fluid into the blood capillaries from the interstitial spaces of the body, conservation of water and salt by the kidneys, and increased thirst and increased appetite for salt, which make the person drink water and eat salty foods if able.

The sympathetic reflexes provide immediate help toward bringing about recovery because they become maximally activated within 30 seconds to a minute after hemorrhage.

The angiotensin and vasopressin mechanisms, as well as the reverse stress-relaxation that causes contraction of the blood vessels and venous reservoirs, all require 10 minutes to 1 hour to respond completely, but they aid greatly in increasing the arterial pressure or increasing the circulatory filling pressure and thereby increasing the return of blood to the heart.

Finally, readjustment of blood volume by absorption of fluid from the interstitial spaces and intestinal tract, as well as oral ingestion and absorption of additional quantities of water and salt, may require from 1 to 48 hours, but recovery eventually takes place, provided the shock does not become severe enough to enter the progressive stage.

“Progressive Shock” Is Caused by a Vicious Circle of Cardiovascular Deterioration

Figure 24–3 shows some of the positive feedbacks that further depress cardiac output in shock, thus causing the shock to become progressive. Some of the more important feedbacks are the following.

Cardiac Depression. When the arterial pressure falls lowenough, coronary blood flow decreases below thatrequired for adequate nutrition of the myocardium. 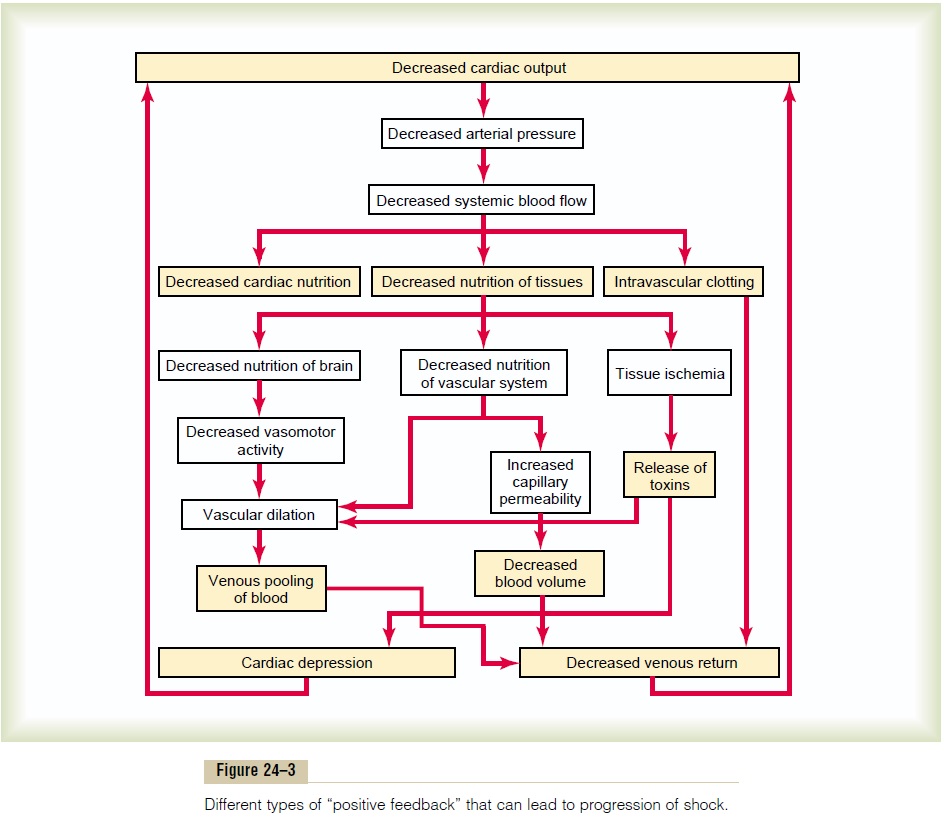 Figure 24–4 shows cardiac output curves extrapo-lated to the human heart from experiments in dogs, demonstrating progressive deterioration of the heart at different times after the onset of shock. A dog was bled until the arterial pressure fell to 30 mm Hg, and the pressure was held at this level by further bleeding or retransfusion of blood as required. Note from the second curve in the figure that there was little deteri-oration of the heart during the first 2 hours, but by 4 hours, the heart had deteriorated about 40 per cent; then, rapidly, during the last hour of the experiment (after 4 hours of low coronary blood pressure), the heart deteriorated completely. 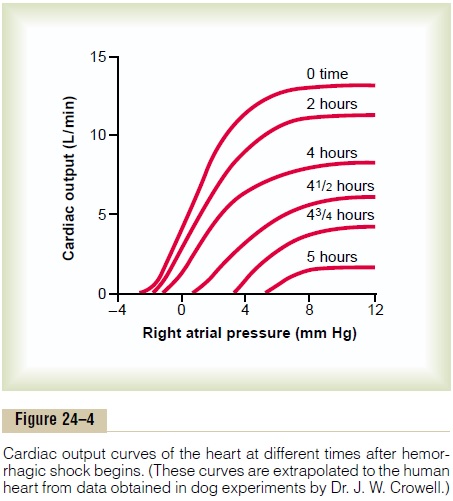 Vasomotor Failure. In the early stages of shock, variouscirculatory reflexes cause intense activity of the sympathetic nervous system. This, as discussed earlier, helps delay depression of the cardiac output and especially helps prevent decreased arterial pressure. However, there comes a point when diminished blood flow to the brain’s vasomotor center depresses the center so much that it, too, becomes progressively less active and finally totally inactive. For instance, com-plete circulatory arrest to the brain causes, during thefirst 4 to 8 minutes, the most intense of all sympathetic discharges, but by the end of 10 to 15 minutes, the vaso-motor center becomes so depressed that no further evidence of sympathetic discharge can be demon-strated. Fortunately, the vasomotor center usually does not fail in the early stages of shock if the arterial pressure remains above 30 mm Hg.

Blockage of Very Small Vessels—“Sludged Blood.” In time,blockage occurs in many of the very small blood vessels in the circulatory system, and this also causes the shock to progress. The initiating cause of this blockage is sluggish blood flow in the microvessels.

Because tissue metabolism continues despite the low flow, large amounts of acid, both carbonic acid and lactic acid, continue to empty into the local blood vessels and greatly increase the local acidity of the blood. This acid, plus other deterioration products from the ischemic tissues, causes local blood aggluti-nation, resulting in minute blood clots, leading to very small plugs in the small vessels. Even if the vessels do not become plugged, an increased tendency for the blood cells to stick to one another makes it more dif-ficult for blood to flow through the microvasculature, giving rise to the term sludged blood.

Increased Capillary Permeability. After many hours ofcapillary hypoxia and lack of other nutrients, the permeability of the capillaries gradually increases, and large quantities of fluid begin to transude into the tissues. This decreases the blood volume even more, with a resultant further decrease in cardiac output, making the shock still more severe. Capillary hypoxia does not cause increased capillary permeability until the late stages of prolonged shock.

Release of Toxins by Ischemic Tissue. Throughout thehistory of research in the field of shock, it has been suggested that shock causes tissues to release toxic substances, such as histamine, serotonin, and tissue enzymes, that cause further deterioration of the circu-latory system. Quantitative studies have proved the significance of at least one toxin, endotoxin, in some types of shock.

Cardiac Depression Caused by Endotoxin. Endotoxinis released from the bodies of dead gram-negative bacteria in the intestines. Diminished blood flow to the intestines often causes enhanced formation and absorption of this toxic substance. The circulating toxin then causes increased cellular metabolism despite inadequate nutrition of the cells; this has a spe-cific effect on the heart muscle, causing cardiac depres-sion. Endotoxin can play a major role in some typesof shock, especially “septic shock,”.

Generalized Cellular Deterioration. As shock becomessevere, many signs of generalized cellular deteriora-tion occur throughout the body. One organ especially affected is the liver, as illustrated in Figure 24–5. This occurs mainly because of lack of enough nutrients to support the normally high rate of metabolism in liver cells, but also partly because of the extreme exposure of the liver cells to any vascular toxin or other abnor-mal metabolic factor occurring in shock. 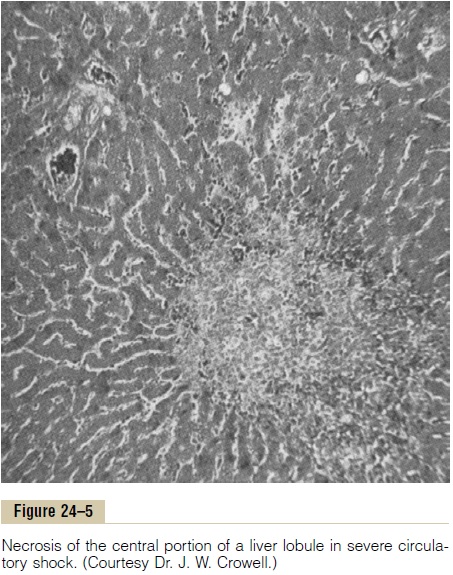 Among the damaging cellular effects that are known to occur in most body tissues are the following:

1.     Active transport of sodium and potassium through the cell membrane is greatly diminished. As a result, sodium and chloride accumulate in the cells, and potassium is lost from the cells. In addition, the cells begin to swell.

2.     Mitochondrial activity in the liver cells, as well as in many other tissues of the body, becomes severely depressed.

3.     Lysosomes in the cells in widespread tissue areas begin to break open, with intracellular release of hydrolases that cause further intracellulardeterioration.

4.     Cellular metabolism of nutrients, such as glucose, eventually becomes greatly depressed in the last stages of shock. The actions of some hormones are depressed as well, including almost 100 per

cent depression of the action of insulin.

All these effects contribute to further deterioration of many organs of the body, including especially (1) the liver, with depression of its many metabolic and detoxification functions; (2) the lungs, with eventual development of pulmonary edema and poor ability to oxygenate the blood; and (3) the heart, thereby further depressing its contractility.

Tissue Necrosis in Severe Shock—Patchy Areas of Necrosis Occur Because of Patchy Blood Flows in Different Organs. Not all cells of the body are equallydamaged by shock, because some tissues have better blood supplies than others. For instance, the cells adja-cent to the arterial ends of capillaries receive better nutrition than cells adjacent to the venous ends of the same capillaries. Therefore, one would expect more nutritive deficiency around the venous ends of capil-laries than elsewhere. This is precisely the effect that Crowell discovered in studying tissue areas in many parts of the body. For instance, Figure 24–5 shows necrosis in the center of a liver lobule, the portion of the lobule that is last to be exposed to the blood as it passes through the liver sinusoids.

Similar punctate lesions occur in heart muscle, although here a definite repetitive pattern, such as occurs in the liver, cannot be demonstrated. Never-theless, the cardiac lesions play an important role in leading to the final irreversible stage of shock. Deteri-orative lesions also occur in the kidneys, especially in the epithelium of the kidney tubules, leading to kidney failure and occasionally uremic death several days later. Deterioration of the lungs also often leads to res-piratory distress and death several days later—called the shock lung syndrome.

Acidosis in Shock. Most metabolic derangements thatoccur in shocked tissue can lead to blood acidosis all through the body. This results from poor delivery of oxygen to the tissues, which greatly diminishes oxida-tive metabolism of the foodstuffs. When this occurs, the cells obtain most of their energy by the anaerobic process of glycolysis, which leads to tremendous quan-tities of excess lactic acid in the blood. In addition, poor blood flow through tissues prevents normal removal of carbon dioxide. The carbon dioxide reacts locally in the cells with water to form high concentrations of intracellular carbonic acid; this, in turn, reacts with various tissue chemicals to form still other intracellu-lar acidic substances. Thus, another deteriorative effect of shock is both generalized and local tissue acidosis, leading to further progression of the shock itself.

All the factors just discussed that can lead to further progression of shock are types of positive feedback. That is, each increase in the degree of shock causes a further increase in the shock.

Considering once again the principles of positive feedback and vicious circle, one can readily understand why there is a critical cardiac output level above which a person in shock recovers and below which a person enters a vicious circle of cir-culatory deterioration that proceeds until death.