1.     Cardiac abnormalities that decrease the ability of the heart to pump blood.

These include especially myocardial infarction but also toxic states of the heart, severe heart valve dysfunction, heart arrhythmias, and other conditions. The circulatory shock that results from diminished cardiac pumping ability is called cardiogenic shock. It is pointed out that as many as 85 per cent of people who develop cardiogenic shock do not survive.

The specific causes of shock are discussed later. For the present, it is important to note that all of them lead to inadequate delivery of nutrientsto critical tissues and critical organs and also cause inadequate removal of cellu-lar waste products from the tissues.

What Happens to the Arterial Pressure in Circulatory Shock?

In most types of shock, especially shock caused by severe blood loss, the arterial blood pressure decreases at the same time as the cardiac output decreases, although usually not as much.

Tissue Deterioration Is the End Result of Circulatory Shock, Whatever the Cause

Once circulatory shock reaches a critical state of sever-ity, regardless of its initiating cause, the shock itselfbreeds more shock. That is, the inadequate blood flowcauses the body tissues to begin deteriorating, includ-ing the heart and circulatory system itself. This causes an even greater decrease in cardiac output, and a vicious circle ensues, with progressively increasing cir-culatory shock, less adequate tissue perfusion, more shock, and so forth until death. It is with this late stage of circulatory shock that we are especially concerned, because appropriate physiologic treatment can often reverse the rapid slide to death.

Because the characteristics of circulatory shock change with different degrees of severity, shock is divided into the following three major stages:

1.     A nonprogressive stage (sometimes called the compensated stage), in which the normal circulatory compensatory mechanisms eventually cause full recovery without help from outside therapy.

2.     A progressive stage, in which, without therapy, the shock becomes steadily worse until death.

3.     An irreversible stage, in which the shock has progressed to such an extent that all forms of known therapy are inadequate to save the person’s life, even though, for the moment, the person is still alive.

Now, let us discuss the stages of circulatory shock caused by decreased blood volume, which illustrate the basic principles. Then we can consider special charac-teristics of shock initiated by other causes. 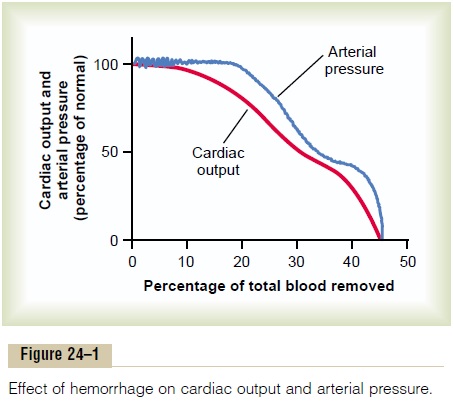