Home | | Modern Pharmacology with Clinical Applications | Progress in Therapeutics: Contributions of Many Cultures
Posted On :  21.12.2017 06:27 am

Progress in Therapeutics: Contributions of Many Cultures 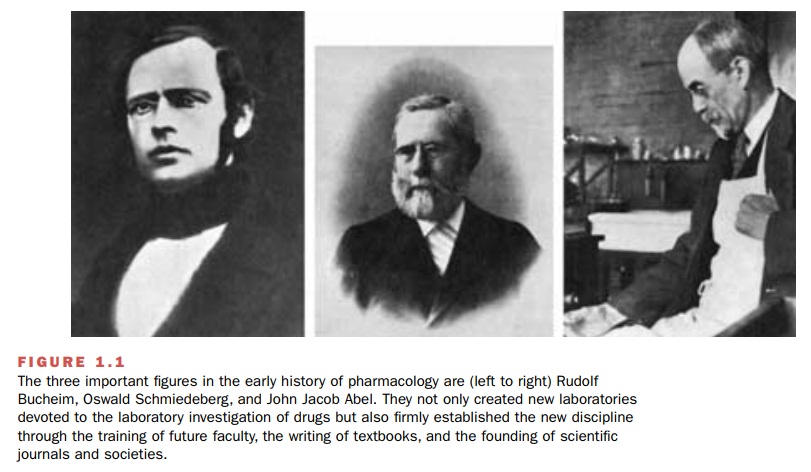 CONTRIBUTIONS OF MANY CULTURES

The ancient Chinese wrote extensively on medical subjects. The Pen Tsao, for instance, was written about 2700 B.C. and contained classifications of individual me-dicinal plants as well as compilations of plant mixtures to be used for medical purposes. The Chinese doctrine of signatures (like used to treat like) enables us to un-derstand why medicines of animal origin were of such great importance in the Chinese pharmacopoeia.

Ancient Egyptian medical papyri contain numerous prescriptions. The largest and perhaps the most impor-tant of these, the Ebers papyrus (1550 B.C.), contains about 800 prescriptions quite similar to those written today in that they have one or more active substances as well as vehicles (animal fat for ointments; and water, milk, wine, beer, or honey for liquids) for suspending or dissolving the active drug. These prescriptions also com-monly offer a brief statement of how the preparation is to be prepared (mixed, pounded, boiled, strained, left overnight in the dew) and how it is to be used (swal-lowed, inhaled, gargled, applied externally, given as an enema). Cathartics and purgatives were particularly in vogue, since both patient and physician could tell al-most immediately whether a result had been achieved. It was reasoned that in causing the contents of the gas-trointestinal tract to be forcibly ejected, one simultane-ously drove out the disease-producing evil spirits that had taken hold of the unfortunate patient.

The level of drug usage achieved by the Egyptians undoubtedly had a great influence on Greek medicine and literature. Observations on the medical effects of various natural substances are found in both the Iliad and the Odyssey. Battle wounds frequently were cov-ered with powdered plant leaves or bark; their astrin-gent and pain-reducing actions were derived from the tannins they contained. It may have been mandrake root (containing atropinelike substances that induce a twilight sleep) that protected Ulysses from Circe. The oriental hellebore, which contains the cardiotoxic Veratrum alkaloids, was smeared on arrow tips to in-crease their killing power. The fascination of the Greeks with the toxic effects of various plant extracts led to an increasing body of knowledge concerned primarily with the poisonous aspects of drugs (the science of toxicol-ogy). Plato’s description of the death of Socrates is an accurate description of the toxicological properties of the juice of the hemlock fruit. His description of the paralysis of sensory and motor nerves, followed eventu-ally by central nervous system depression and respira-tory paralysis, precisely matches the known actions of the potent hemlock alkaloid, coniine.

The Indian cultures of Central and South America, although totally isolated from the Old World, developed drug lore and usage in a fashion almost parallel with that of the older civilization. The use of drugs played an inti-mate part in the rites, religions, history, and knowledge of the South American Indians. New World medicine also was closely tied to religious thought, and Indian cultures treated their patients with a blend of religious rituals and herbal remedies. Incantations, charms, and appeals to various deities were as important as the appropriate ap-plication of poultices, decoctions, and infusions.

Early drug practitioners, both in Europe and South America, gathered herbs, plants, animals, and minerals and often blended them into a variety of foul-smelling and ill-flavored concoctions. The fact that many of these preparations were so distasteful led to an attempt to improve on the “cosmetic” properties of these mixtures to ensure that patients would actually use them. Individuals who searched for improved product formu-lations were largely responsible for the founding of the disciplines of pharmacy (the science of preparing, com-pounding, and dispensing medicines) and pharmacog-nosy (the identification and preparation of crude drugs from natural sources).

There has long been a tendency of some physicians to prescribe large numbers of drugs where one or two would be sufficient. We can trace the history of this polypharmaceutical approach to Galen (A.D. 131–201), who was considered the greatest European physician after Hippocrates. Galen believed that drugs had cer-tain essential properties, such as warmth, coldness, dry-ness, or humidity, and that by using several drugs he could combine these properties to adjust for deficien-cies in the patient. Unfortunately, he often formulated general rules and laws before sufficient factual informa-tion was available to justify their formulations.

By the first century A.D. it was clear to both physi-cian and protopharmacologist alike that there was much variation to be found from one biological extract to another, even when these were prepared by the same individual. It was reasoned that to fashion a rational and reproducible system of therapeutics and to study phar-macological activity one had to obtain standardized and uniform medicinal agents.

At the turn of the nineteenth century, methods be-came available for the isolation of active principles from crude drugs. The development of chemistry made it pos-sible to isolate and synthesize chemically pure com-pounds that would give reproducible biological results. In 1806, Serturner (1783–1841) isolated the first pure ac-tive principle when he purified morphine from the opium poppy. Many other chemically pure active com-pounds were soon obtained from crude drug prepara-tions, including emetine by Pelletier (1788–1844) from ipecacuanha root; quinine by Carentou (1795–1877) from cinchona bark; strychnine by Magendie (1783– 1855) from nux vomica; and, in 1856, cocaine by Wohler (1800–1882) from coca.

The isolation and use of pure substances allowed for an analysis of what was to become one of the basic con-cerns of pharmacology, that is, the quantitative study of drug action. It was soon realized that drug action is pro-duced along a continuum of effects, with low doses pro-ducing a less but essentially similar effect on organs and tissues as high doses. It also was noted that the appear-ance of toxic effects of drugs was frequently a function of the dose–response relationship.

Until the nineteenth century, the rapid development of pharmacology as a distinct discipline was hindered by the lack of sophisticated chemical methodology and by limited knowledge of physiological mechanisms. The significant advances made through laboratory studies of animal physiology accomplished by early investigators such as Françoise Magendie and Claude Bernard pro-vided an environment conducive to the creation of sim-ilar laboratories for the study of pharmacological phe-nomena.

One of the first laboratories devoted almost exclu-sively to drug research was established in Dorpat, Estonia, in the late 1840s by Rudolph Bucheim (1820– 1879) (Fig. 1.1). The laboratory, built in Bucheim’s home, was devoted to studying the actions of agents such as cathartics, alcohol, chloroform, anthelmintics, and heavy metals. Bucheim believed that “the investi-gation of drugs . . . is a task for a pharmacologist and not for a chemist or pharmacist, who until now have been expected to do this.”

Although the availability of a laboratory devoted to pharmacological investigations was important, much more was required to raise this discipline to the same prominent position occupied by other basic sciences; this included the creation of chairs in pharmacology at other 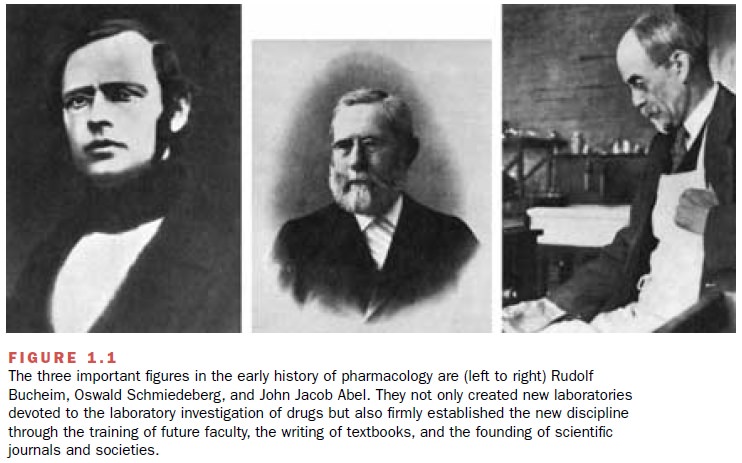 academic institutions and the training of a sufficient num-ber of talented investigators to occupy these positions. The latter task was accomplished largely by Bucheim’s pupil and successor at Dorpat, Oswald Schmiedeberg (1838–1921), undoubtedly the most prominent pharma-cologist of the nineteenth century (Fig. 1.1). In addition to conducting his own outstanding research on the pharma-cology of diuretics, emetics, cardiac glycosides, and so forth, Schmiedeberg wrote an important medical text-book and trained approximately 120 pupils from more than 20 countries. Many of these new investigators either started or developed laboratories devoted to experimen-tal pharmacology in their own countries.

One of Schmiedeberg’s most outstanding students was John Jacob Abel, who has been called the founder of American pharmacology (Fig 1.1). Abel occupied the chair of pharmacology first at the University of Michigan and then at Johns Hopkins University. Among his most important research accomplishments is an examination of the chemistry and isolation of the active principles from the adrenal medulla (a monobenzyl derivative of epinephrine) and the pancreas (crystallization of in-sulin). He also examined mushroom poisons, investigated the chemotherapeutic actions of the arsenicals and anti-monials, conducted studies on tetanus toxin, and de-signed a model for an artificial kidney. In addition, Abel founded the Journal of Experimental Medicine, the Journal of Biological Chemistry, and the Journal of Pharmacology and Experimental Therapeutics. His devo-tion to pharmacological research, his enthusiasm for the training of students in this new discipline, and his estab-lishment of journals and scientific societies proved criti- cal to the rise of experimental pharmacology in the United States.

Pharmacology, as a separate and vital discipline, has interests that distinguish it from the other basic sciences and pharmacy. Its primary concern is not the cataloguing of the biological effects that result from the administra-tion of chemical substances but rather the dual aims of providing an understanding of normal and abnormal human physiology and biochemistry through the appli-cation of drugs as experimental tools and (2) applying to clinical medicine the information gained from funda-mental investigation and observation.

A report in the Status of Research in Pharmacology has described some of the founding principles on which the discipline is based and that distinguish pharmacol-ogy from other fields of study. These principles include the study of the following:

·            Biological changes that result from repeated drug use: tolerance, addiction, adverse reactions, altered rates of drug metabolism, and so forth

In the past 100 years there has been extraordinary growth in medical knowledge. This expansion of infor-mation has come about largely through the contribu-tions of the biological sciences to medicine by a system-atic approach to the understanding and treatment of disease. The experimental method and technological advances are the foundations upon which modern med-icine is built.