Levelsof Automation in the Two Industries

The levels of automation (Section 3.3) in the two industries are compared in Table 4.2. The significant differences are seen in the low and intermediate levels. At the device level, there are differences in the types of actuators and sensors used in the two industry categories. simply because the processes and equipment are different. In the process industries, the devices are used mostly for the control loops in chemical, thermal, or similar processing operations, whereas in discrete manufacturing, the devices control the mechanical actions of machines. At the ncxt level above, the difference is that unit operations art: controlled in the process industries, and machines are controiled in the discrete manufacturing operations. At the third level, the difference is between control of interconnected unit processing operations and interconnected machines.At the upper levels (plant and enterprise), the control issues are similar, allowing for the fact that the products and processes are different.

Variables and Parameters  in the Two Industries 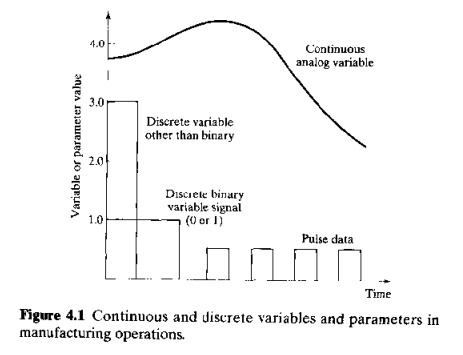 A continuous variable (or parameter) is one that is uninterrupted as time proceeds. at least during the manufacturing operation. A continuous variable is generally considered to be analog, which means it can take on any value within a certain range. The variable is not restricted to a discrete set of values. Production operations in both the process industries and discrete parts manufacturing are characterized by continuous variables. Examples include force:, temperature, flow rate, pressure, and velocity. All of these variables (whichever ones apply to a given production process) arc continuous over time during the process, and they can take on any of an infinite number of possible values within a certain practical range,