Chapter: Essentials of Psychiatry: Psychopathology Across the Life-Cycle

The period between the ages of 20 and 30 years is commonly referred to as early adulthood.

The period between the ages of 20 and 30 years is commonly referred to as early adulthood.

Developmental tasks of early adulthood include achieving emo-tional and financial independence from parents and forming intimate relationships with people outside the family of origin. Stage-specific stressors include leaving home, education and career choice, in some cases service in the armed forces, find-ing and maintaining employment, courtship and marriage, and sexual relations, among others.

Problems of young adulthood fall mostly into the categories listed in Table 8.8. By the end of early adulthood, people have passed through the ages of greatest risk for first onset of the majority of recognized mental disorders. Comorbidity between disorders becomes the rule rather than the exception. In a population sur-vey in the USA, 14% of those evaluated had three or more life-time disorders and accounted for more than 50% of the mental disorders found, both on a lifetime basis and in the year before the assessment (Kessler et al., 1994).

The relationships between comorbid “disorders” are complex. Whether they indeed represent independent entities with distinctive etiologies, pathogenetic mechanisms and outcomes, or merely reflect different ways in which fundamental psychopathological disturbances are manifest over time, between sexes, or across aspects of psychological functioning remains to be determined. In some cases, one disorder is clearly antecedent to another. Examples include disorders of childhood, such as separation anxiety disorder or conduct disorder, that evolve into adult versions – in these cases, panic disorder with agoraphobia or antisocial personality disorder, respectively. Sometimes, as in the case of attention-deficit/hyperactivity disorder, residual symptoms persist and form the basis for developing problems such as substance abuse or personality dysfunction. At other times, a second disorder may develop as a consequence of a primary disorder – in reaction to it or as a complication. Examples include

major depressive disorder developing after a person has been incapacitated by panic disorder with agoraphobia, or sedative, anxiolytic, or alcohol abuse developing because the person attempted to self-medicate for the condition. Alternatively, disorders appear more or less contemporaneously and reflect an underlying diathesis or vulnerability. Thus, patients present with several disorders, all suggestive of a problem of generalized impulsivity, such as bulimia nervosa, a substance use disorder and an impulse control disorder (e.g., kleptomania). Personality disorders often develop in the context of underlying traits affecting specific capacities such as impulse control or interpersonal relatedness, as dysfunction becomes widespread.

Although disturbances in mood can occur at any age, the peak ages of onset of mood disorders are probably in the twenties. Mood disturbances may be acute and episodic or insidious and chronic. They may be relatively mild or severe and may be ac-companied by psychotic features or suicidal behavior. The most common mood disorders are major depressive disorder, dys-thymic disorder, bipolar disorder and cyclothymic disorder.

Although several anxiety disorders have their onset most often in childhood or adolescence, as previously described, others have increased risk for onset in early adult life. In particular, many cases of acrophobia (fear of heights) and situational phobias, such as of elevators, flying, or closed places, develop in early adulthood (American Psychiatric Association, 2000). There is a rise in the rate of panic disorder in women in early and middle adult life (Regier et al., 1988). Obsessive–compulsive disorder has a later age at onset in women than in men, during the twenties rather than the teens. Acute stress disorder and PTSD can occur at any age but are prevalent in young adults.

Disorders such as panic disorder, other specific phobias, social phobia and generalized anxiety disorder, which are more likely to begin in childhood or adolescence, may persist or recur during early adult life.

Milder, time-limited reactions to stressors of any severity may also occur. These are common occurrences that might follow the breakup of a romantic relationship or the loss of a job. The symptoms may be of depression, anxiety, or disturbance of conduct. They cause temporarily decreased performance at school or work or impairment in social relationships. Provided that the consequences of the stressor are resolved (i.e., the person resumes dating or obtains a new job), the course of the symptoms and impairment should be less than 6 months.

Problems with various types of impulsive behaviors and problems with adaptive functioning in general seem particularly prone to become manifest in early adulthood. These problems may de-velop, in part, secondary to the increased stresses of movement away from the protective environments of school and family that characterize the period.

Of major significance in the twenties is the stabilization of patterns of perceiving, relating to, and thinking about the envi-ronment and oneself that we call personality. Also, however, in the twenties, the potential for the development of inflexible and maladaptive traits that cause distress or interfere with effective social and occupational functioning may arise. Thus, personality disorders may become evident.

Certain disturbances characterized by physical complaints without known medical etiology have a high incidence rate in early adulthood. Specifically, conversion reactions, hypochon-driasis and somatization disorder can be first diagnosed in this age group.

Problems in reality testing are reflected in abnormalities of speech, thinking, perception and self-experience. They are sug-gestive of psychotic disorders such as schizophrenia. Although schizophrenia and its counterpart disorder of briefer duration, schizophreniform disorder, may have an onset in late adoles-cence (or in later adulthood), the most common age at onset is in early adult life.

Patients who have illness episodes that are character-ized by major episodes of mood disturbance, either depressed or manic, accompanied by schizophrenia-like psychotic symp-toms and whose delusions and hallucinations are also present when mood symptoms are not, are said to have schizoaffective disorder.

The vast majority of disorders with typical onset in early adult life persist or recur in middle adult life. Some of these disorders may also have their initial onset after age 30 years. Table 8.10 summarizes the estimated prevalence and sex distri-bution of mental disorders of early adulthood. 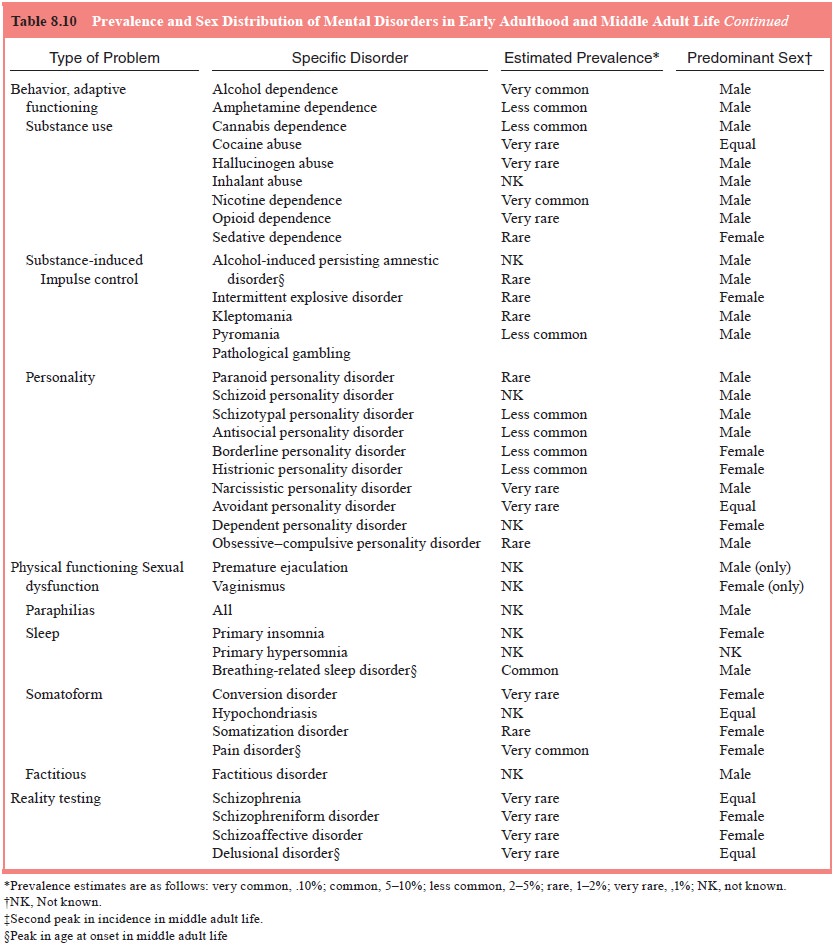