Chapter: Essentials of Psychiatry: Psychopathology Across the Life-Cycle

Children differ from each other in ways that affect their psy-chological functioning from birth.

Children differ from each other in ways that affect their psy-chological functioning from birth. They differ in intelligence, in temperament and in genetic endowment for both risk for and resilience against mental disorder.

Intelligence is the ability to reason, plan, think abstractly, solve problems, understand and learn. Average intelligence is as-sociated with a score of 100 (IQ) on a standardized intelligence test. About 67% of children have IQs between 85 and 115 and about 95% between 70 and 130. Estimates of the heritability of IQ range from 0.4 to 0.8 (Plomin, 1990) indicate that heredity plays a larger role than environment. Higher intelligence is correlated with successful adaptation in life, and substantially reduced in-telligence is associated with developmental and behavioral prob-lems and functional impairment (see the discussion of mental retardation).

Estimates are that 5 to 15% of 9- to 10-year-old children suffer from an emotional or behavior disorder of sufficient severity to cause impairment in everyday functioning (Cox, 1994). The co-occurrence of several disorders (i.e., comorbidity) is common in childhood (Caron and Rutter, 1991). As can be seen in Table 8.3, comorbidity both within and between disorder types can be observed. 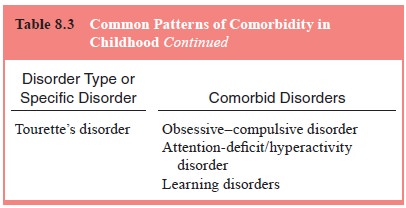 The most severe developmental problems are evident in infancy. For example, the infant with autism may manifest limited eye contact, facial responsiveness and smiling, and may be difficult to hug or may appear to dislike physical contact. Restricted social relationships emerge, however, after the third or fourth year of life. For children with other pervasive developmental disorders, infancy may be normal, with the onset of the abnormal behavior occurring months or even years after birth. In milder forms, such as Asperger’s syndrome (Tantum, 1988), in which communication skills are spared, a pervasive developmental disorder may not be recognized until preschool or the actual beginning of school. The course after diagnosis is variable, depending on the subtype.

The emotional problems of children involve anxiety and depression. Although these problems have counterparts in adults, children frequently experience and express their disturbances of feelings or emotions differently from adults. Because of their more limited vocabulary and understanding of emotional life, children may not express their emotional distress verbally as well as some adults do. Thus, even in the emotional disorders of childhood, disturbances in behavior and in physical functioning are apt to be prominent in the clinical presentation. Children are not unlike so-called alexithymic adults, whose expression of emotions is indirect and nonverbal.

Some children may be excessive worriers in general. They may worry about school performance, athletic prowess, appearance and popularity, parental expectations, potential catastrophic events, and so on. Children who worry exces-sively are said to have generalized anxiety disorder. Moody periods are common in children, but children may also ex-hibit prolonged and persistent disturbances of mood, usually depression.

The manifestations of mania in younger children may involve irritability, emotional lability, or admixtures of dys-phoria and hypomania, as well as more typical symptoms of hyperactivity, grandiosity, pressure of speech and distractibility (Carlson, 1990; Strober et al., 1989). As many as one-third of children with major depressive episodes may show bipolar disorder by adolescence (Geller et al., 1994). Early-onset bi-polar disorders may have a poorer prognosis than later onset disorders. Childhood major depressive disorder also appears to increase the risk for the development of personality disorders in young adulthood (Kasen et al., 2001).

Behavior problems in children fall into the general groupings of oppositional behavior, hyperactivity, excessive aggressiveness and conduct disturbance. An appropriate degree of control over behavior is a necessary development for a child to function in a family, in school, and with peers.

A number of developmental tasks of childhood involve primarily physical functions. These include developing proper eating and sleeping habits (Wolke, 1994), bowel (Hersov, 1994) and bladder (Shaffer, 1994) control and sexual identity (Paikoff and Brooks-Gunn, 1994). Disturbances may occur in these functions during childhood. 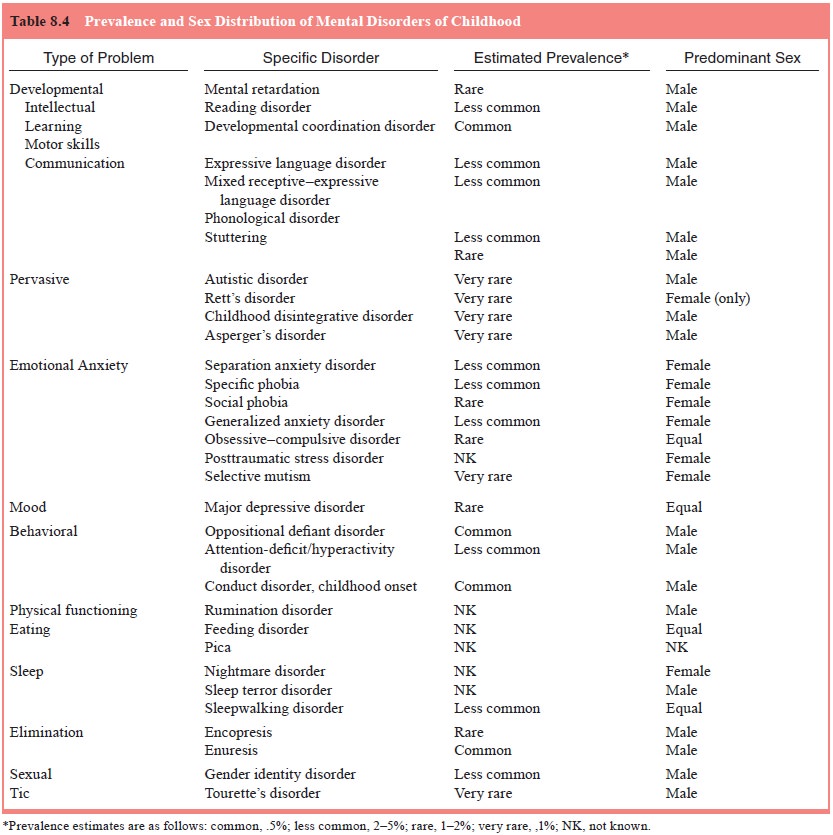