Principle of light propagation through a fibre

Principle of light propagation through a fibre

i) Index of refraction:

In order to understand ray propagation in a fiber. This is called Snell’s Law. 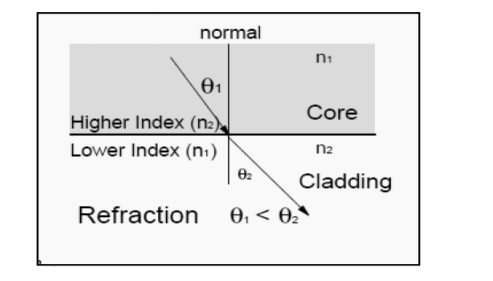 1           When light enters in lighter medium from denser medium it inclines towards normal.

2           When light enters in denser medium from lighter medium it inclines to normal.

If we consider we notice above that as angle 01 becomes larger and larger so does angle 02. Because of the refraction effect 02 becomes large more quickly than 01. At the same point

02 will reach 90° while 01 is still well less than that. This is called “critical angle”. When

01 increase further then refraction ceases and the light starts to be reflected rather than refracted. Thus light is perfectly reflected at an interface between two materials of different refractive index if:

When light traveling in a dense medium hits a boundary at a steep angle (larger than the "critical angle “for the boundary), the light will be completely reflected. This phenomenon is called total internal reflection. This effect is used in optical fibers to confine light in the core. Light travels along the fiber bouncing back and forth off of the boundary; because the light must strike the boundary with an angle greater than the critical angle, possible in air to glass. If we now consider above Figures we can see the effect of the critical only light that enters the fiber certain range of angles can travel down the fiber without leaking out. Total internal reflection occurs when light enters from higher refractive index to lower refractive index material, i.e. from glass to air total internal reflection is possible but it is not possible in air to glass. 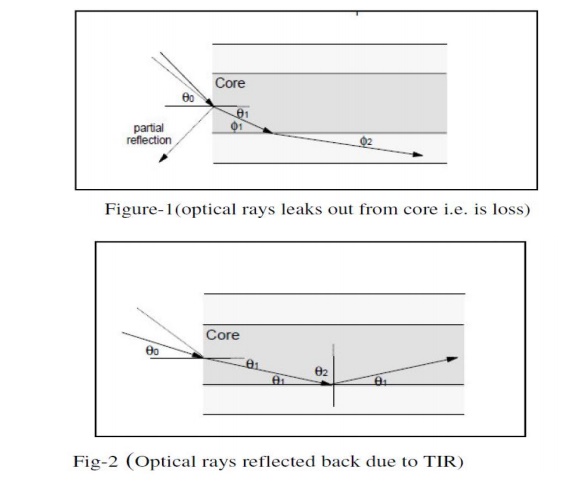 The maximum incident angle below which the ray undergoes the total internal reflection is called an acceptance angle. The cone is referred as acceptance cone.When we consider rays entering the fiber from the outside (into the end face of fiber) we see that there is a further complication. The refractive index difference between the fiber core and the air will cause any arriving ray to be refracted. This means that there is a maximum angle for a ray arriving at the fiber end face at which the ray will propagate. Rays arriving at an angle less than this angle will propagate but rays arriving at greater angle will not. This angle is not a “critical angle” as that term is reserved for the case where light arrives from a material of higher RI to one of lower RI (In this, case the critical angle is the angle within the fiber). Thus there is

“cone of acceptance” at the endface of a fiber. Rays arriving within the cone will propagate and ones arriving outside of it will not. The acceptance cone is function of difference of RI of core and cladding

It is defined as the sine of acceptance angle of the fiber.

One of the most often quoted characteristics of an optical fiber is its “Numerical Aperture”. The NA is intended as a measure of the light capturing ability of the fiber. However it is used for many other purposes. For example it may be used as a measure of the amount of loss that we might expect on a bend of a particular radius etc.This ray will be refracted and will later encounter the core-cladding interface at an angle such that it will be reflected. This is because the angle 02 is greater than the critical angle. The angle is greater because we are measuring angle from a normal to the core-cladding boundary not a tangent to it.

This one will reach the core- cladding interface at an angle smaller than the critical angle it will pass into the cladding. This ray will eventually be lost. It is clear that there is a “cone” of acceptance If ray enters the fiber at an angle within the cone then it will be captured and propagatesas a bound mode. If a ray enters the fiber at an angle outside the cone then it will leave the core and eventually leave the fiber itself.The Numerical Aperture is the sign of the largest angle contained within the cone of acceptance.

An expression for an Acceptance angle and Numerical aperture

Finally, it is incident from core to cladding surface at an angle фC.A

At the incident angle is critical angle (фC), the ray just moves along interface BC.

Hence, the angle of incidence (фC = 90 – q) at the interface of core and cladding will be more than the critical angle. Hence the ray is totally internally reflected ray.

Thus, only those ray which passes within the acceptance angle will be totally internally reflected. Therefore, the light incident on the core within this maximum external incident angle can be coupled into the fiber to propagate. This angle is called as an acceptance angle.

The rays follows a helical path through the fiber is called skew ray. The light traveling down the fiber is a group of electromagnetic (EM) waves occupying a small band of frequencies within the electromagnetic spectrum, so it is a simplification to call it a ray of light. However, it is enormously helpful to do this, providing an easy concept, some framework to hang our ideas on. We do this all the time and it serves us well providing we are clear that it is only an analogy. Magnetic fields are not really lines floating in space around a magnet, electrons are not really little black ball bearings flying round a red nucleus. Light therefore, is propagated as an electromagnetic wave along the fiber. The two components, the electric field and the magnetic field form patterns across the fiber. These patterns are called modes of transmission.

Modes means methods — hence methods of transmission. An optic fiber that carries more than one mode is called a multimode fiber (MM). The number of modes is always a whole number. In a given piece of fiber, there are only a set number of possible modes. This is because each mode is a pattern of electric and magnetic fields having a physical size. The dimensions of the core determine how many modes or patterns can exist in the core — the larger the core, the more modes. The number of modes is always an integer, we cannot have incomplete field patterns. This is similar to transmission of motor vehicles along a road. As the road is made wider, it stays as a single lane road until it is large enough to accommodate an extra line of vehicles whereupon it suddenly jumps to a two lane road. We never come across a 1.15 lane road!