Changes made in the original LP model will change the elements of the current optimal tableau, which in turn may affect the optimality and/or the feasibility of the cur-rent solution. This section introduces a number of primal-dual relationships that can be used to recompute the elements of the optimal simplex tableau. These relationships will form the basis for the economic interpretation of the LP model as well as for post-optimality analysis.

This section starts with a brief review of matrices, a convenient tool for carrying out the simplex tableau computations.

These definitions can be represented mathematically as

1. (Row vector X matrix, VA). The operation is defined only if the size of the row vector V equals the number of rows of A. In this case,

2. (Matrix X column vector, AP). The operation is defined only if the number of columns of A equals the size of column vector P. In this case,

3. (Scalar X matrix, aA). Given the scalar (or constant) quantity a, the multiplication operation aA will result in a matrix of the same size as A whose (i, j)th element equals aaij- For example, given a = 10,

In general, aA = Aa. The same operation is extended equally to the multiplication of vectors by scalars. For example, aV = Va and aP = Pa.

In each of the following cases, indicate whether the given matrix operation is legitimate, and, if so, calculate the result. 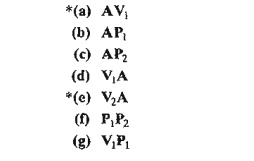 In Chapter 3, we followed a specific format for setting up the simplex tableau. This for-mat is the basis for the development in this chapter.

Figure 4.1 gives a schematic representation of the starting and general simplex tableaus. In the starting tableau, the constraint coefficients under the starting variables form an identity matrix (all main-diagonal elements equal 1 and all off-diagonal elements equal zero). With this arrangement, subsequent iterations of the simplex tableau generated by the Gauss-Jordan row operations (see Chapter 3) will modify the elements of the identity matrix to produce what is known as the inverse matrix. As we will see in the remainder of this chapter, the inverse matrix is key to computing all the elements of the associated simplex tableau. 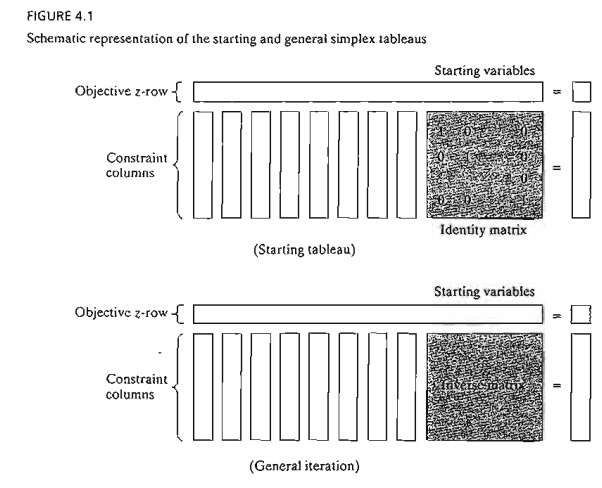 *(a) Identify the optimal inverse matrix.

This section provides two methods for determining the dual values. Note that the dual of the dual is itself the primal, which means that the dual solution can also be used to yield the optimal primal solution automatically.

The elements of the row vector must appear in the same order in which the basic variables are listed in the Basic column of the simplex tableau.

To prepare the problem for solution by the simplex method, we add a slack x4 in the first constraint and an artificial R in the second. The resulting primal and the associated dual problems are thus defined as follows:

We now show how the optimal dual values are determined using the two methods described at the start of this section.

Method 1. In Table 4.4. the starting primal variables x4 and R uniquely correspond to the dual variables yl and y2, respectively. Thus, we determine the optimum dual solution as follows:

Method 2. The optimal inverse matrix, highlighted under the starting variables x4 and R, is given in Table 4.4 as

First, we note that the optimal primal variables are listed in the tableau in row order as x2 and then x1. This means that the elements of the original objective coefficients for the two variables must appear in the same order-namely,

At the optimum, the relationship holds as a strict equation. The relationship does not specify which problem is primal and which is dual. Only the sense of optimization (maximization or minimization) is important in this case.

The optimum cannot occur with z strictly less than w (i.e., z < w) because, no matter how close z and ware, there is always room for improvement, which contradicts optimality as Figure 4.2 demonstrates. 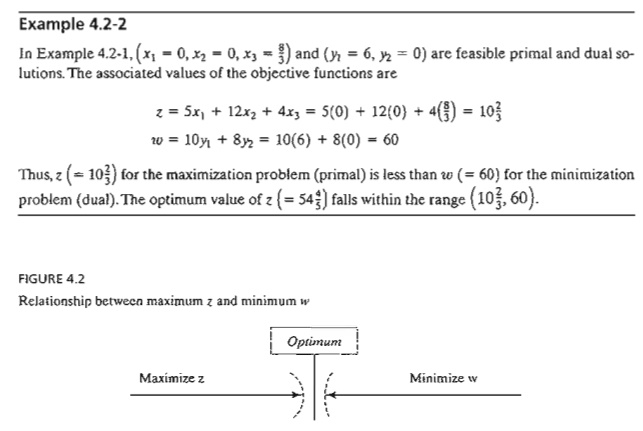 1. Find the optimal value of the objective function for the following problem by inspecting only its dual. (Do not solve the dual by the simplex method.) 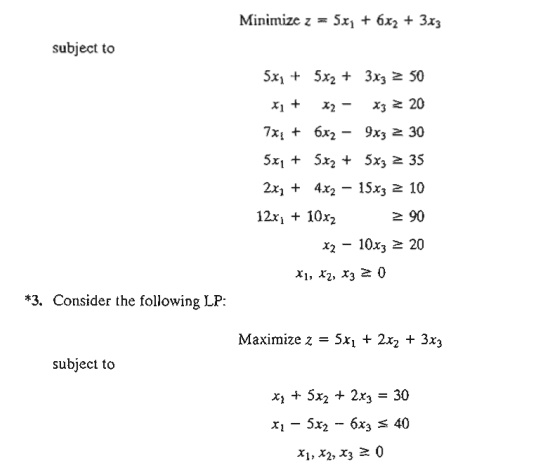 Given that the artificial variable x4 and the slack variable x5 form the starting basic variables and that M was set equal to 100 when solving the problem, the optimal tableau is given as

The starting solution consists of artificial x4 and x5 for the first and second constraints and slack x6 for the third constraint. Using M = 100 for the artificial variables, the optimal tableau is given as 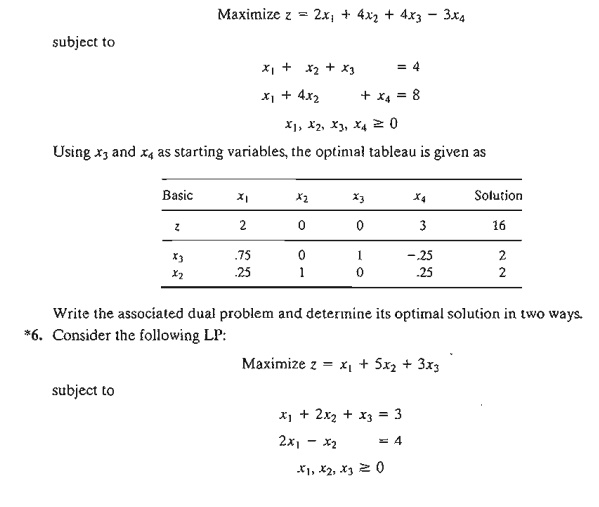 The starting solution consists of x3 in the first constraint and an artificial x4 in the second constraint with M = 100. The optimal tableau is given as

7. Consider the following set of inequalities:

A feasible solution can be found by augmenting the trivial objective function Maximize z = x1 + x2 and then solving the problem. Another way is to solve the dual; from which a solution for the set of inequalities can be found. Apply the two methods.

8. Estimate a range for the optimal objective value for the following LPs: 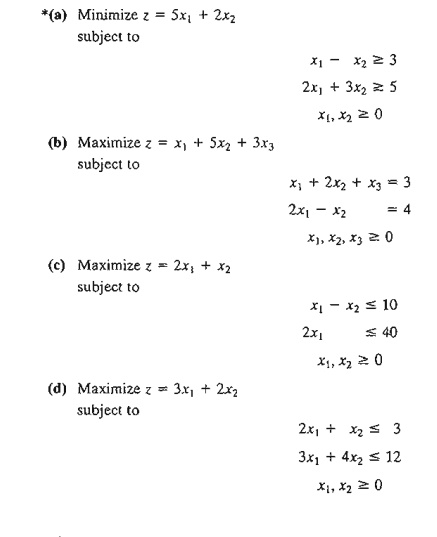 9. In Problem 7(a), let yl and y2 be the dual variables. Determine whether the following pairs of primal-dual solutions are optimal:

This section shows how any iteration of the entire simplex tableau can be generated from the original data of the problem, the inverse associated with the iteration, and the dual problem. Using the layout of the simplex tableau in Figure 4.1, we can divide the computations into two types:

Formula 1: Constraint Column Computations. In any simplex iteration, a left-hand or a right-hand side column is computed as follows:

Formula 2: Objective z-row Computations. In any simplex iteration, the objective equation coefficient (reduced cost) of xj is computed as follows:

We use the LP in Example 4.2-1 to illustrate the application of Formulas 1 and 2. From the optimal tableau in Table 4.4, we have 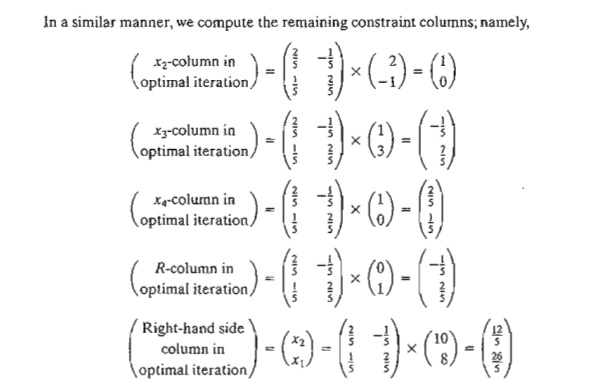 Next, we demonstrate how the objective row computations are carried out using Formula 2. The optimal values of the dual variables, (y1. y2) = (29/5,-2/5), were computed in Example 4.2-1 using two different methods. These values are used in Formula 2 to determine the associated z-coefficients; namely,

Notice that Formula 1 and Formula 2 calculations can be applied at any iteration of either the primal or the dual problems. All we need is the inverse associated with the (primal or dual) iteration and the original LP data.

1. Generate the first simplex iteration of Example 4.2-1 (you may use TORA's Iterations => M-method for convenience), then use Formulas 1 and 2 to verify all the elements of the resulting tableau. 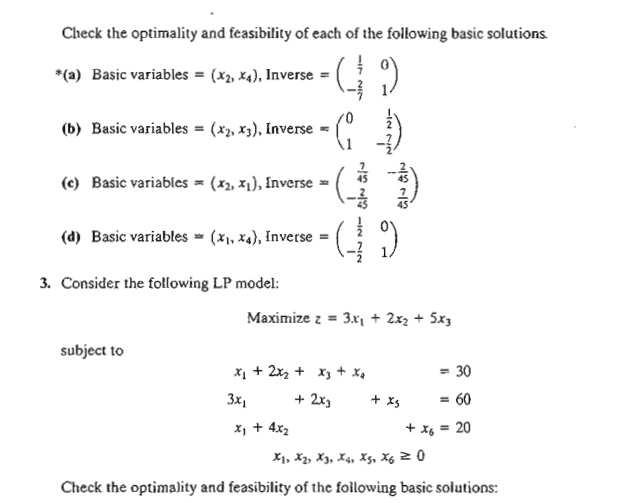 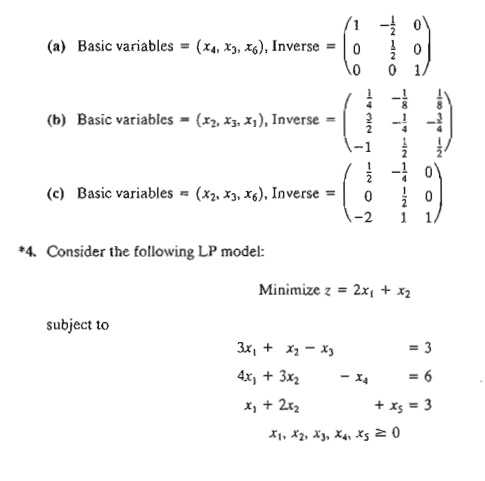 Compute the entire simplex tableau associated with the following basic solution and check it for optimality and feasibility. 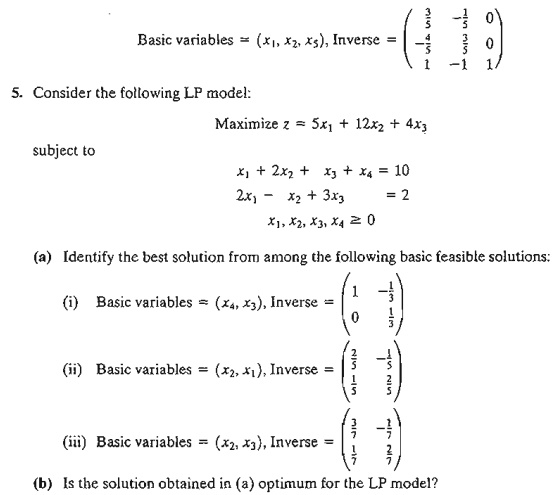 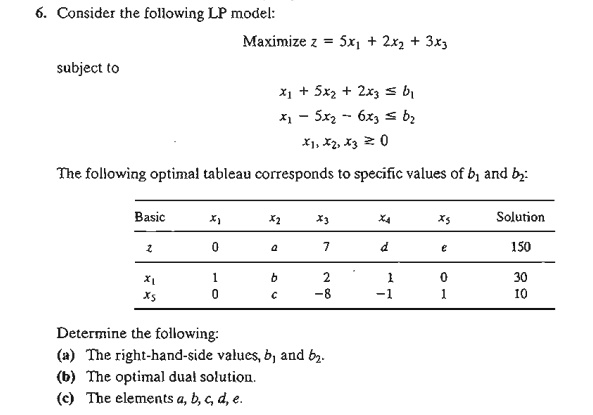 *7. The following is the optimal tableau for a maximization LP model with three (≤) constraints and all nonnegative variables. The variables x3, x4, and xs are the slacks associated with the three constraints. Determine the associated optimal objective value in two different ways by using the primal and dual objective functions. 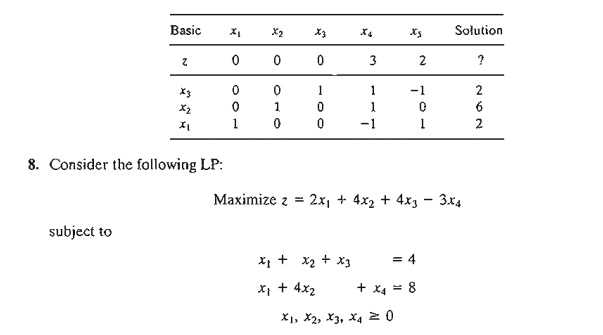 Use the dual problem to show that the basic solution (x1, x2)  is not optimal.