Induction agents are immunosuppressive drugs given intraoperatively and immediately postoperatively to deplete the T-cell population.

Induction agents are immunosuppressive drugs given intraoperatively and immediately postoperatively to deplete the T-cell population. OKT3 is a murine monoclonal antibody to the CD3 complex of the T cell, an intrinsic part of the T-cell receptor. The exact mechanism by which T cells are then cleared from the circulation may occur by FcR-mediated clearance or complement-mediated lysis. OKT3 also blocks the func-tion of killer T cells. Because of its murine origin, recipients often develop anti-murine antibodies precluding subsequent use for rejection episodes. Patients also experience cytokine release syndrome, with release of TNF-α, IL-2, and interferon-gamma into the circulation. Symptoms include fever, rigors, pulmonary edema, aseptic menin-gitis, and myalgias. Basiliximab (Simulect) and daclizumab (Zenapax) are humanized anti-CD25 monoclonal antibodies directed against the αchain of the high-affinity IL-2 receptor. Such humanized antibodies are engineered to contain a part of the human antibody, rendering them less immuno-genic. Alemtuzumab (Campath 1H) is an anti-CD52 monoclonal antibody that is gaining acceptance as an induction agent for steroid-free protocols. This is another humanized antibody, initially designed to treat chronic lymphocytic leukemia. A single dose given intraoperatively should eliminate CD52-positive B and T cells, as well as monocytes and monocyte-derived dendritic cells, from the bone marrow and peripheral circulation. Rituximab (Rituxan) is a monoclonal antibody against the CD20 antigen on B lymphocytes. Originally used to treat non-Hodgkin’s lymphoma, it is being used to treat B-cell- or humoral-mediated allograft rejection. Rabbit anti-thymocyte globulin has replaced equine anti-thymocyte globulin as the primary polyclonal antibody to treat acute episodes of solid organ allograft rejection. This drug is made by injecting human lymphocytes into rabbits with subsequent collection and purification of the antiserum. This drug is given for seven to ten days with elimination of T cells from the circulation.

Prolonged lymphopenia occurs after this drug is infused.

The introduction of cyclosporine in 1983 heralded a new era of solid organ transplan-tation. Five-year graft survival improved dramatically. Cyclosporine is a cyclic pep-tide from a fungus that binds to cyclophilin, a cellular protein. This complex binds and further inhibits calcineurin and sub-sequent activation of NFAT (nuclear fac-tor of activated T cells). This prevents IL-2 and other cytokine gene activation. Cyclo-sporine also promotes TGF-β activation, which may account for the fibrosis noted in allograft parenchyma with prolonged use of this drug. Tacrolimus (Prograf, FK506 ) is another calcineurin inhibitor similar to cyclosporine. This is a macrolide drug that is more potent than cyclosporine. It binds to an immunophilin, FK506 binding protein, which is involved in the inhibition of cal-cineurin-mediated IL-2 gene transcription. Like cyclosporine, prolonged use of tacroli-mus can cause fibrosis of the allograft paren-chyma. Use of tacrolimus has led to fewer solid organ allograft rejection episodes when compared with cyclosporine. Most solid organ transplant centers in the United States have therefore shifted to tacrolimus as the primary maintenance immunosup-pressant. Tacrolimus and cyclosporine are fairly similar, however, in preventing GvHD after allogeneic HSCT.

Sirolimus (Rapamune) is another macrolide antibiotic that binds to the FK binding protein and modulates the activity of the mammalian target of rapamycin (mTOR); mTOR inhibits IL-2-mediated signal transduction, resulting in cycle arrest at the G1 to S phase. Sirolimus has replaced cyclosporine and tacrolimus for long-term use in solid organ allografts because of lesser incidence of fibrosis in the allograft parenchyma.

Many clini-cians and investigators in the field of allo-geneic HSCT regard sirolimus as a better drug for long-term induction of host-graft tolerance. Prominent side effects include hyperlipidemia and poor wound healing. In summary, sirolimus blocks the response of B- and T-cell activation by cytokines, while cyclosporine and tacrolimus inhibit production of cytokines.

Azathioprine (Imuran) is a purine ana-log that inhibits purine nucleotide syn-thesis and interferes with RNA synthesis. This drug prevents T-cell activation by affecting gene replication and transcrip-tion. It is an old drug that continues to play a role in immunosuppression by having fewer side effects and good tolerability by most patients. Mycophenolate mofetil (CellCept) is a reversible inhibitor of the enzyme inosine monophosphate dehydro-genase (IMPDH). IMPDH is a rate-limiting enzyme in the synthesis de novo of purines and production of guanosine nucleotides from inosine. Mycophenolate appears to have selective antiproliferative properties against lymphocytes, which rely on purine synthesis de novo. It is more potent than Imuran and has helped limit the incidence of acute rejection.

Corticosteroids have been mainstay drugs for transplantation since the 1960s. Their mechanisms of action are broad, impairing both the innate and adaptive arms of the immune system. Corticoste-roids block cytokine-receptor expression by T cells and inhibit function of antigen-presenting cells. Corticosteroids also cause lymphophenia and prevent migration of monocytes and neutrophils to sites of inflammation. Figure 18.1 illustrates the immune cascade and the targets of various immunosuppressive drugs. 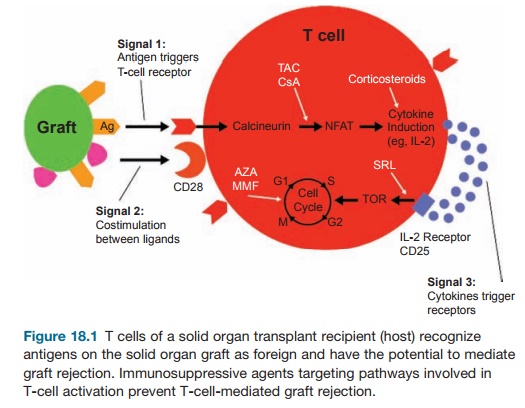 Standard maintenance immunosup-pression consists of at least two or three drugs. The most common combination in solid organ allografting includes tacro-limus, mycophenolate mofetil, and ste-roids. Hematopoietic stem cell allografts try to avoid steroids as much as possible, and long-term immune suppression as prophylaxis beyond six months is avoided if possible in order not to compromise any graft-versus-tumor (GvT) effect. Steroid-free protocols are gaining popularity in solid organ allografts to avert the long-term side effects of steroid use (i.e., weight gain, diabetes, osteoporosis, hyperlipidemia, and hypertension).