I. Prepositions of Time

These prepositions are used to indicate when a particular event happened. These include: in, on, at, since, for, during etc.

These prepositions are used to indicate the location and come before a noun or a pronoun These include: in, on, between, behind, under, over, near etc.

2. Jenny lives near her workplace.

These prepositions are used to describe movement. These include: to, into, towards, through etc.

2. The swimmer jumped into the pool.

3. The dog was coming towards him.

Since’ refers to a particular point of time.

2. The construction of this building has been going on since January.

‘For’ refers to the duration of the time.

(e.g.): 1. Maya has worked in this institution as an accountant for 23 years.

2. Many ideas were discussed for three weeks before the annual day theme was finalised.

Both ‘during’ and ‘in’ are used to describe actions that happen in a particular period of time.

(e.g.): 1.We will be visiting my grandparents during the summer vacation.

2. We will be visiting my grandparents in the summer vacation.

‘Between’ is used when naming definite, individual items.

(e.g.): 1.The discussion on a sports meet between our school and other schools are going on for two days.

2. The final match will be held between India and Australia.

‘Among’ is used when the items are part of a group and are not specifically named.

(e.g.):1. The sailors divided the money among themselves; and the ship sailed on.

2. We’d discussed this point among ourselves many times over the past months.

A. Choose the most appropriate preposition from the brackets

1. We have been living in Chennai for eight years. (for/ since)

2. Abdul has taken after his father. (after/ at)

3. Vimal generally goes to his workplace by bus. (by/on)

4. The cricket ball was hidden among the leaves. (among/ between)

5. Mani divided his toys between his brothers and sisters. (among/ between)

B. Identify the prepositions in the given sentences and underline them.

1. Riya borrowed a dress from me and lent it to her friend, Mary.

2. When I moved back to the city, things had changed considerably.

3. The burglar found the keys under the pot in the balcony.

4. Prabhu was hiding behind the door when his sister came looking for him.

5. My dog sat on my hat and squashed it.

1. Riya borrowed a dress from me and lent it to her friend, Mary.

2. When I moved back to the city, things had changed considerably.

3. The burglar found the keys under the pot in the balcony.

4. Prabhu was hiding behind the door when his sister came looking for him.

5. My dog sat on my hat and squashed it.

C. Complete the passage by filling in appropriate prepositions from the list-(with, out, to, in, from, during, of, for, by). Some prepositions may be used more than once. 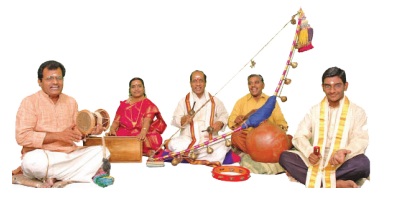 Some verbs are usually followed by prepositions before the object of the verb.

i. The kids laughed at the hilarious antics of the clown.

ii. Fathima planned to stay at a hotel, when she visited Mumbai.

iii. I have pressing matters to attend to in Kolkata.

iv. I believe in the healing power of a mother’s touch.

v. She was so happy in life that she could not ask for more.

vi. The elderly couple care for their pets as they do for their children.

vii. I agree with everything you’ve said.

D. Frame sentences using the prepositional verbs given in the box.

1. The farmers expect to benefit from the government.

2. The Vice- President stands in for the president when he is away.

3. She stayed at home when her children were young.

4. The plane went into a nose dive.

5. I am preparing for the I.A.S examination.

6. The rail pass will pay for itself after about two trips.

7. We cannot rely on others.

8. She often joked about all the things that could go wrong.

9. The committee consists of twelve members.

10. The nurse attended to the patient's request.

E. Given below is a picture of a carnival. Complete the factual description by filling in the blanks with appropriate prepositions.

Fairs and festivals form an integral part of the culture of Tamil Nadu. They are an excellent platform to promote and preserve the vibrant art and culture of the Tamils. 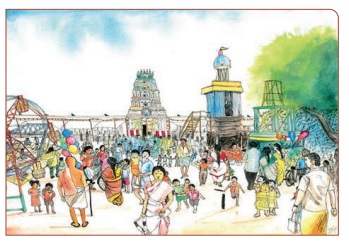 A thiruvizha (festival) is a source of excitement and thrill for villagers. The village thoroughfare wears a festive look, as the open spaces are cleaned, spruced up and decorated (a) ________colourful streamers.

You can hear the shrieks (k)________happy children enjoying the rides on ferris wheels and carousels, elders looking (l)_________ each other with smiles on their faces.

The entire day is spent (m) _______fun and gaiety. All the village people irrespective of their age, look forward (n)_________the thiruvizha every year.