Preclinical Studies Relevant to the Pathophysiology of Schizophrenia 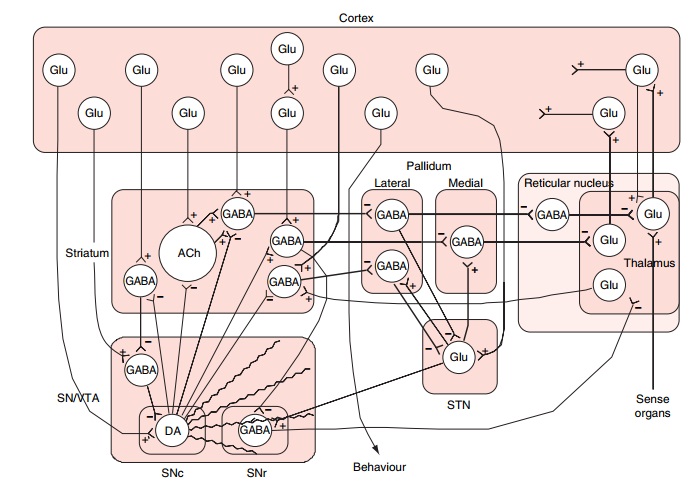 Several classes of drugs capable of inducing psychosis in humans act as behavioral stimulants in its stereotyping and has lost the rich exploratory rep-ertoire.

Preclinical Studies Relevant to the Pathophysiology of Schizophrenia

Several classes of drugs capable of inducing psychosis in humans act as behavioral stimulants in its stereotyping and has lost the rich exploratory rep-ertoire. Tentatively, such abnormal behavior can be looked upon as a model of psychosis with both positive and negative symptom elements and a cognitive deficit component. Examples of psy-chotomimetic drugs inducing such abnormal behavior are the dopamine-receptor agonists acting directly or indirectly and the glutamatergic antagonists acting on the NMDA-sensitive gluta-mate receptor.

Multiple observations regarding these systems suggest that glutamatergic pathways, presumably emanating from the cerebral cortex, exert a strong inhibitory and stabilizing effect on an array of subcortical, potentially psychosis-inducing mecha-nisms, involving both monoaminergic and cholinergic path-ways. The mechanism underlying this stabilizing glutamatergic function appears to be complex. In part it seems to be located postsynaptically to the (limbic) striatum, where corticostriatal pathways control both direct and indirect striatopallidothalamic pathways, as detailed in Figure 10.1. These pathways appear to regulate the sensory input to the cerebral cortex as well as the arousal. The direct and indirect pathways are mutually antago-nistic, the former being activating and the latter inhibitory on the thalamocortical glutamatergic projections. Both the direct and the indirect pathways are also controlled by dopaminergic projections, whereby the former are activating (via D1 receptors) and the latter inhibitory (via D2 receptors). In addition, glutama-tergic and glutamatergic/GABAergic pathways seem to control the monoaminergic neurons themselves by means of an accelera-tor and a brake mechanism, respectively (Carlsson et al., 2001). These observations support glutamatergic involvement in schiz-ophrenia and emphasize the interaction of glutamate with other, largely subcortical transmitter systems and open up possibilities for a multifactorial dysregulation in complex neurocircuits where, 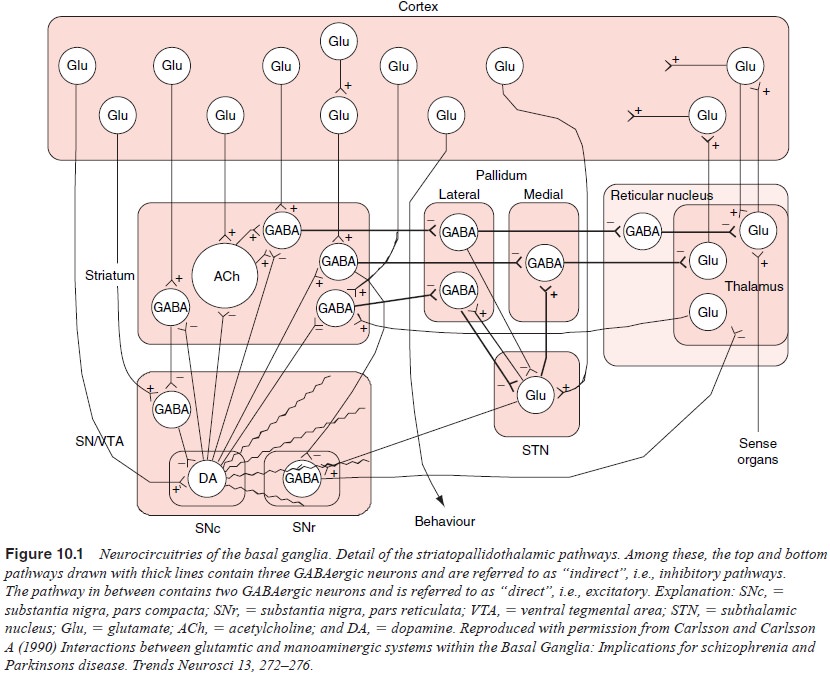 besides glutamate, GABAergic, monoaminergic and cholinergic systems participate in the psychotogenic process (Carlsson and Carlsson, 1990).