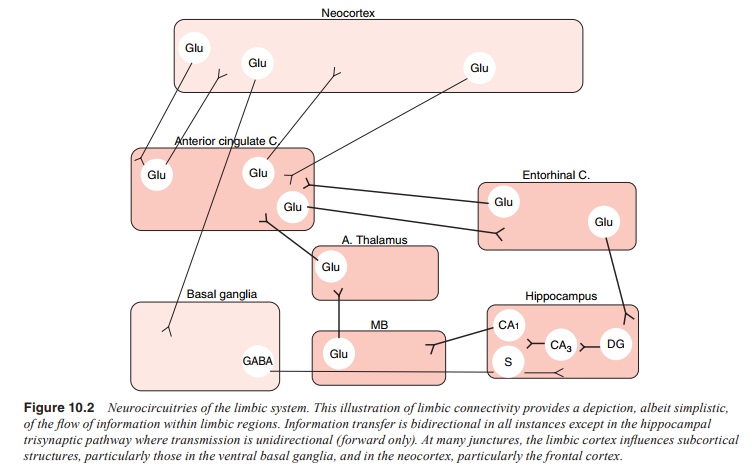 Much focused work in the human limbic cortex in schizophrenia began after Scheibel and Kovelman (1981) described an alteration in pyramidal cell apical dendrite orientation in the hippocampus, in its anterior and middle section, particularly at the subicular-CA1 border. In a later extension of this work, they correlated symptom severity with the extent of the dendritic disorientation (Kovelman and Scheibel, 1984). However, other studies have not uniformly replicated these findings (Altshuler et al., 1987; Christison et al., 1989; Vogel et al., 1997), but the original find-ings are still often referenced as evidence for neuroanatomical abnormalities in the hippocampus. Weinberger (1996) highlights several studies describing cytoarchitectural abnormalities in the entorhinal cortex (including the specific loss of NADPH-diapho-rase neurons Nicotinamide Adenosine Dinucleotide Phosphate) as providing the best evidence for neuropathological findings (Akbarian et al., 1993; Arnold et al., 1991; Jakob and Beckmann, 1986). Other studies have reported significant reductions in the volumes or cross-sectional areas of the entorhinal cortex or hip-pocampus in schizophrenia (Bogerts et al., 1985; Brown et al., 1986; Colter et al., 1987; Falkai and Bogerts, 1986; Falkai et al., 1988), but these results have not been uniformly replicated (Benes et al., 1991; Heckers et al., 1991).

Functional studies of human brain in schizophrenia have directly demonstrated an alteration in neuronal activity in the limbic cor-tex in the illness (Fletcher, 1998; Haznedar et al., 1997; Heckers et al., 1998; Medoff et al., 2001; Nordahl et al., 1996; Tamminga et al., 1992). Anterior cingulate cortex consistently shows altera-tions in schizophrenia when persons are imaged medication-free and matched for performance. Moreover, connectivity analyses suggest that the anterior cingulate rCBF is not tightly coupled to hippocampal activity during tasks of learning and memory, as it is in normal persons. Although the entire body of these data have not yet suggested the pivotal limbic pathology, they do implicate abnormal function of these structures in the illness. Moreover, as suggested in the preclinical studies, such pathology could desta-bilize the function of subcortical brain areas in psychosis.

An analysis of connectivity in auditory discrimination ex-periments directly suggests that a systems failure occurs within limbic cortex in schizophrenia. A malfunction within the limbic cortex and the subsequent disruption of related neocortical areas and secondary dysregulation of subcortical structures may under-lie the manifestations of schizophrenia. This working hypothesis suggests that it may be the resultant “misbehavior” of the limbic system itself that generates positive and cognitive symptoms in schizophrenia, possibly through its connections with neocortical and subcortical structures. These speculations raise the possibil-ity that the primary origin of the circuit dysfunction could be varied, but inevitably result in a characteristic “psychosis” circuit abnormality (Figure 10.2). 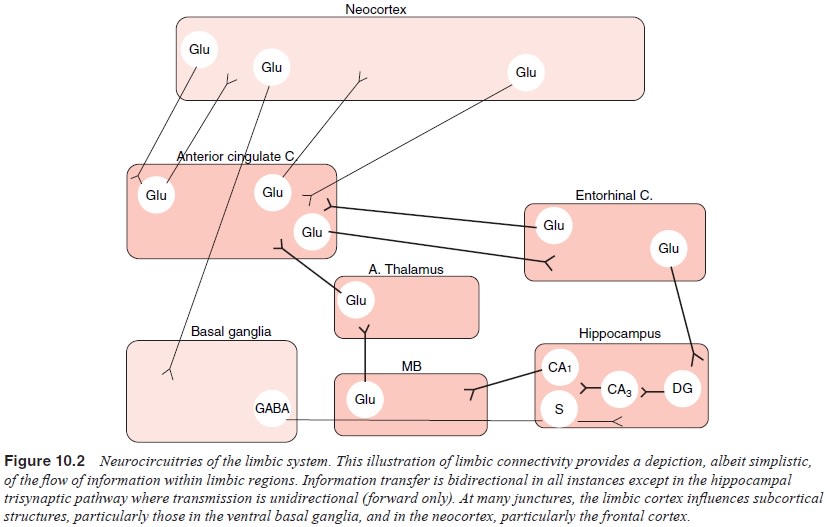 The clinical evidence of a systems basis of psychosis, along with the preclinical data suggesting multiple and complex neurotrans-mitter interactions within these symptoms, builds a plausible “psychosis circuit” for schizophrenia and potentially for its treat-ment. The effective functioning of the human brain to facilitate cognitive, motor and affective performance, is dependent not only on the proper functioning of individual regional neuronal groups dedicated to specific tasks, but also to interacting brain systems which function to connect neural systems to perform a particular mental task and systematically to direct information flow in the brain. Because schizophrenia is not characterized pri-marily by a neural or behavioral deficit, but rather by productive symptoms and by a “confusion” of neural activity with result-ing mental malfunction, a system hypothesis of schizophrenia pathology is plausible. The idea that psychosis is the consequence of dysfunction somewhere within the limbic cortex, seen during cognitive work and even during routine mental function is sup-ported by a great deal of research. This putative dysfunction is prominently manifest in the anterior components of the limbic system. Hence this change primarily influences the frontal re-gions of the neocortex, leaving the posterior hippocampus and the posterior neocortex relatively unaffected. Exactly where the primary limbic pathology is located within these anterior areas is a matter of speculation, but it could be multiple sites with a single resultant systems dysfunction.

Importantly, this idea allows for the real possibility that other drug actions can be exerted at other sites within the relevant circuits. The 5HT2A antagonist activity of the second generation drugs may well be exerted, either partially or wholly, in frontal cortex. Moreover, the glutamate-enhancing activity of the second generation drugs at the NMDA receptor, whether tied to this sero-tonin action or independent from it, may well be a cortical action. This formulation increases the complexity but also the therapeutic potential of psychosis treatment(CarlssonandCarlsson,1990).