PTSD may be accompanied by enduring neurochemical and psychophysiological changes and can lead to substantial im-pairment and distress.

PTSD may be accompanied by enduring neurochemical and psychophysiological changes and can lead to substantial im-pairment and distress. Sometimes the intensity of symptoms is severe enough to preclude the effective use of trauma-focused psychotherapy. In these situations, the use of medication should not be delayed unnecessarily. Initial studies showed benefit for the tricyclic antidepressant and monoamine oxidase inhibitor medications, however, the selective serotonin reuptake inhibitors (SSRIs) have now replaced these as first-line agents, based upon evidence from several placebo-controlled trials. A suggested se-quencing of treatment is outlined in Table 52.1.

Two double-blind clinical trials in more than 100 patients support the efficacy of amitriptyline and imipramine in com-bat veterans with PTSD (Frank et al., 1988; Davidson et al., 1990). In both studies, the medication was effective on intrusive PTSD symptoms and, to a weaker extent, on avoidant symptoms (Table 52.2). Of importance was that clinical efficacy occurred in patients who did not suffer from depressive illness, suggest-ing that the effect of tricyclic agents in PTSD is independent o 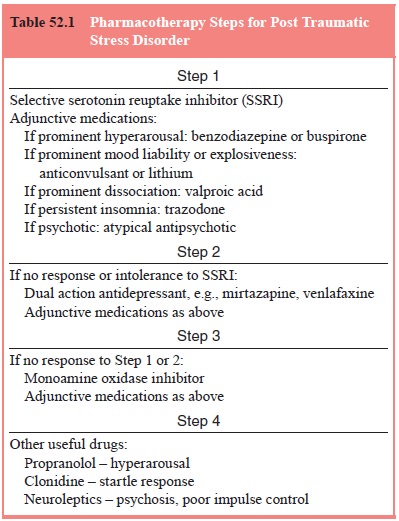 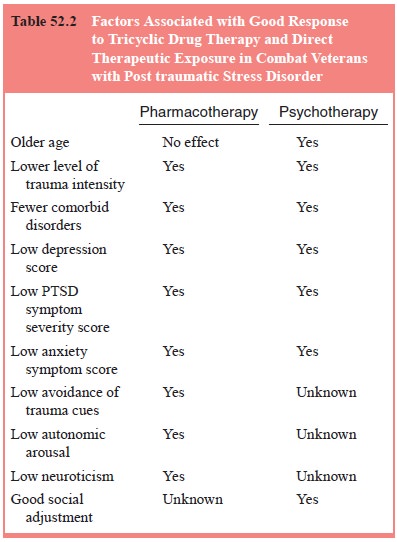 Phenelzine has been found to be effective in symptom re-duction and that avoidant symptoms improve to a much greater degree with phenelzine than with the tricyclic agents. However, the side effects of phenelzine limit its use to a third- or fourth-line drug to be used only when other, safer medications have failed to work. Several placebo-controlled trials have shown positive effects for the SSRI medications, including fluoxetine, sertraline and paroxetine. Long-term use of sertraline is associated with a substantial reduction in relapse over a 15-month period. Data support positive effects for SSRI in men and women and in adults who have survived all major classes of trauma (e.g., combat, sexual violence, nonsexual violence and accident). Each of these medications has broad-spectrum properties across the full symp-tom range of the disorder as well as improving function and, per-haps, resilience or stress-coping. They also support the benefit of SSRI in those with and without comorbid major.

At this point, the indications for antipsychotic and mood-stabilizing drugs are poorly defined, but clinical experience suggests that they continue to have a role in the pharmacologic treatment of PTSD. Antipsychotic medications can be useful in patients with poor impulse control or in those who manifest features of borderline personality disorder. Lithium and car-bamazepine can also be useful in such patients but might benefit individuals who are subject to mood swings and angry or explo-sive outbursts. The appropriate role for the use of benzodiazepines is not well-defined. The antiphobic and antiarousal effects of the benzodiazepines should, in theory, be helpful in PTSD. How-ever, withdrawal from short-acting benzodiazepines may also introduce an additional set of problems with intense symptom rebound. In patients who have a propensity to abuse alcohol and other substances, benzodiazepines are not recommended.

Overall, the antidepressants, mood stabilizers and anticon-vulsants are the medication groups that are generally considered primary for treating PTSD; beta-blockers, alpha-2-agonists and anxiolytics have a less clearly defined place. Often, patients need a combination of drugs but polypharmacy should be utilized in a carefully planned fashion. Also, since the time course of re-sponse may be slow, it is advisable to persist with a particular course of action for at least 8 weeks before deciding that it has been unhelpful. It is possible that avoidance and numbing symp-toms respond more effectively to SSRI drugs.