Pollution and Conservation of Environment

Now a days environment is taken into consideration extensively more than it was before. Conservation and long time management of the components of environment like soil, water, air, plants and animals etc. has now become the most important matter to us.

POLLUTION AND CONSERVATION OF ENVIRONMENT

Now a days environment is taken into consideration extensively more than it was before. Conservation and long time management of the components of environment like soil, water, air, plants and animals etc. has now become the most important matter to us. Now a days man has come to realise that it is better to try to adjust with nature than to conquer it.

Soil is the upper layer of the earth crust which is soft and consisting of a mixture of various organic and inorganic substances. We live on the surface of the soil. We take different necessary elements from the soil. The remains of plants and animals return to the soil. Thus we can utilise repeatedly the different ingredients of the soil by rotation. So it can be said that our relation with the soil is very close. If soil is polluted it will have deadly effect on our environment. 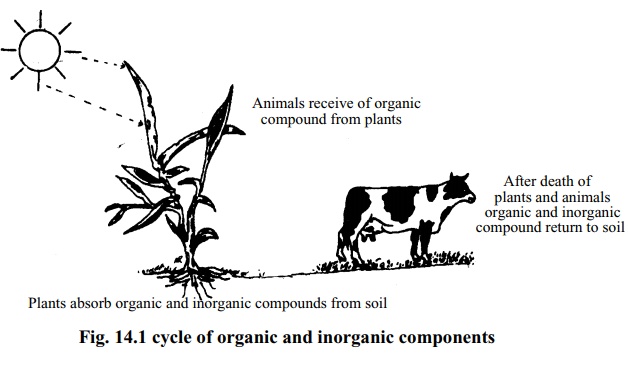 Soil is polluted by several means. Soil is eroded by different natural factors like flood, volcanic eruption, rainfall, and wind flow etc. Due to flood soil is eroded and become unproductive. Plant cannot grow on that soil. Rainfall and wind in the same way erode the upper layer of the earth and make the soil. barren.

Several activities of human beings,cause the soil to be polluted. Destruction of forests and plants, excessive cultivation and irrigation cause soil pollution. If there is no plant and cultivation is done in excess, it will erode the fertile layer of the soil surface and thus soil will become non-fertile. Excess irrigation causes waterlogging and makes the soil saline. Underground salt being dissolved in water come to the surface and make the soil non-fertile. Various types of waste materials are one of the causes of soil pollution. Harmful chemical substances and substances that is not absorbed by nature (e.g. polythene, plastic etc.) cause soil pollution. When soil is polluted no plants, insects or microorganisms can grow on it. As a result the soil becomes unproductive and unfit for human habitation. To keep the natural environment balanced a fertile and productive soil is necessary. Therefore, we all should take care so that the soil does not get unfertile and polluted. One of the ways to protect soil pollution is to plant more and more plants. There should have necessary laws so that industries do not leave their wastes here and there. If we all are careful against soil pollution it is possible to prevent the pollution.

The gaseous layer that surrounds the earth from above the soil and water layer is the atmosphere. It is differentiated into three layers:

(i) Troposphere (adjacent to earth's crust): Above the Earth's crust thislayer is extended from 10 K M. (at polar region;to 16 K.M. (at equator).

(ii) Stratosphere: Above the troposphere this layer is extended up to 80K.M. from the Earth's crust.

(iii) Ionoshpere : Above the stratosphere and extended up to 3500 K.M.

Fog mist, dust particles, clouds, and wind etc. are limited only in the Troposphere. In this layer the average ratio (depending on density) of different components are as follows: Nitrogen - 78%, Oxygen - 21%, Argon - 0.93%, Carbon dioxide - 0.03%, and a trace of water vapour, Methane, Helium and Krypton etc.

Beneath the Stratosphere (25 to 30 K.M. from Earth's crust) there is a dense layer of Ozone. It is called Ozone barrier. This layer protects the life from the harmful effects of the radioactive waves particularly the Ultraviolet Rays of the Sun. The density of air in the ionosphere is very light. Due to the effect of the radioactive rays of the Sun the components of the air remain in ionic forms.

Air is being polluted by smoke from mills and factories, automobiles and from bad smell of waste materials. In the smoke of industries and automobiles there are CO2, CO, SO2 and various other harmful gases. What will happen if the concentration 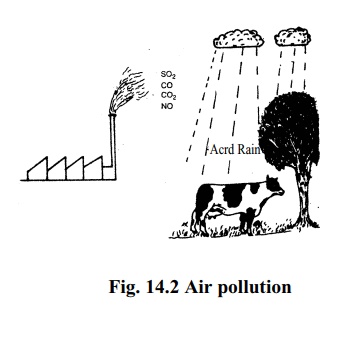 of CO2 increases in the air? The effect resulting the increase of CO2 in the atmosphere is known as Green House Effect. This topic has been elaborately discussed in the next chapter. As a result of green house effect the temperature of the atmosphere increases. For this, there is a possibility of dissolving the ice of polar region and that may cause great flood. Many seaside and low-lying countries will be

submerged. When carbon monoxide mixes with blood, it totally destroys the Oxygen transport capacity of blood. Without Oxygen people will die. Sulphur dioxide and Nitric oxide, produced by Nitrogenous fertilizers, when mixed with rainwater causes acid rain, which is very much harmful for plants, animals, buildings, and instruments. CFC (Chloro-Fluoro Carbon) gas evolves from various materials used by human beings gets in the atmosphere. CFC gas is responsible for damages in the Ozone layer. Detailed discussion in this respect will come later.

The most effective way to stop air pollution is to increase the number of plants. This will maintain the balance of the amount of O2 and CO2. On the other hand it is necessary to take care so that no harmful gas can be mixed with the air. Condition will improve if filter is used in mills and automobiles.

We have so much water in our country that mostly we do not feel the effect of water pollution. Water is polluted by natural means like flood and rainfall. As a result of flood many impurities are mixed with water. Water is mostly polluted by man-made causes. Industrial wastes, household garbage, rainwater containing chemical fertilizer and insecticide, all these mixed with water make it polluted. Due to water pollution extreme harm is caused to aquatic plants and animals. The oxygen content of water becomes reduced and thus many fishes and aquatic animals die and float on the water surface. There are strict regulations against water pollution in European countries. All water transport vessels are to take necessary measures so that their oil and waste materials do not pollute water. There are provisions of severe punishment or heavy penalties if such measures are not taken. To prevent water pollution in our country primarily people should be motivated through different medias. Later regulations should be implemented very strictly and impartially.

Sound is a constant companion of the city dwellers. Sounds of vehicles and vendors wake us up in the morning. All through the day sound pollution occurs with mixed sound of different machineries, telephones and loud voices of human beings in the offices and these have become very normal sound pollution. When a man comes back home and listens to Radio, T.V. or Tape recorder then there is also sound pollution.

If sound exceeds a certain limit (80 decibel). it reaches the stage of pollution. The effect of sound pollution is quite harmful to animals. It causes high blood pressure, insomnia (sleeplessness), loss of hearing capacity and extreme case ofmental disorder.

Ozone is one kind of gas. Three oxygen atoms together constitute one molecule of ozone. The chemical formula is O3, Certainly you know about the three layers of atmosphere Troposphere, and Stratosphere Ionosphere. A dense ozone layer exists in the stratosphere zone about 25 to 30 K.M. above the Earth surface. Ozone is also present in the troposphere zone. This layer of ozone surrounds the Earth from all sides. You have learnt that from time immemorial this ozone layer has been protecting the living beings of the earth from deadly ultraviolet rays radiated from the Sun. 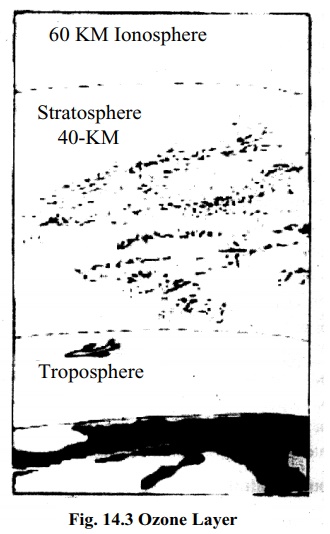 Ultraviolt-B consist of medium wave length. And UV -C consist of short wave length. The ozone layer in the stratosphere zone prevents the total amount of the most dangerous UV -C and most part of less harmful UV -B. The rest amount UV -B is prevented from coming to the earth, by the troposphere zone and clouds.Two American Scientists Maria Molina and Sherwood Ronald in 1974 AD first gave the idea that the chemical compound Chloro Fluoro Carbon (CFC) that is used in our daily life is responsible for the damage of ozone layer. CFC compound is used in the cans of Aerosol and in making of various foams. Getting release in to the atmosphere it moves to the higher atmospheric zone. The CFC compound does not break easily in the lower zone of the atmosphere. Reaching stratosphere CFC comes in contact with ultraviolet rays and releases chlorine after breaking itself. The free chlorine then acts as a catalyst and break the ozone molecule to an oxygen molecule and one oxygen atom. This process goes for years after years. Some other chemical compounds like Carbon Tetrachloride Trichloromethane and Helone also adversely affect the ozone layer. 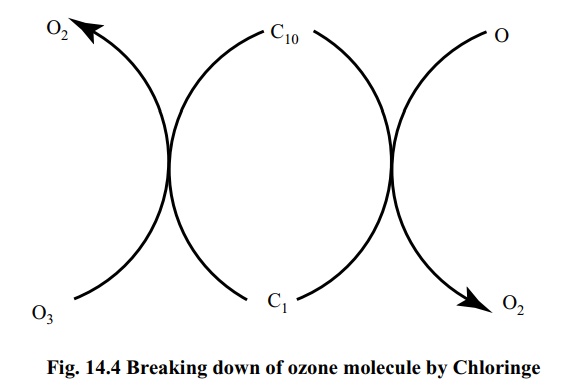 Ultraviolet rays are harmful to living bodies. It is proved that an increased exposure to UV -A and UV -B resulting an enhanced possibility of skin cancer. Besides, various eye diseases like formation of cataract, distortion of eye-lenses, and lose of eye-sight found in aged people, are due to the effect of UV - B. Due to the reduction of the power of disease resistance, contaminations of various infectious diseases increased.