• Anything which occupies space and has mass is called matter.

• Material which has a definite shape and definite volume at room temperature with any number of free surfaces is called solid.

• The molecule of a substance that contains two or more atoms of different elements combined together in a definite ratio, is said to be a molecule of a compound.

• Material which has a definite volume, but no definite shape and has one free surface, is called liquid.

• Material which has neither definite shape nor definite volume, is easily compressible and has no free surface is called gas.

• Metals are elements that are hard and shiny in appearance. Some metals used in our daily li fe are iron, copper, gold, silver, etc. Metals conduct heat and electricity.

• Elements which have the properties of metal and non-metals are called metalloids. Some examples are arsenic, germanium etc.

• On being hit, metals produce a typical sound. They are said to be sonorous.This property is being made used in making temple bells.

• The easiest way to represent the element and to write the chemical formula is using symbols.

5. Bleaching agent Substance which is used to remove the colour.

6. Preservative Substance which prevents food being spoiled by microorganism. 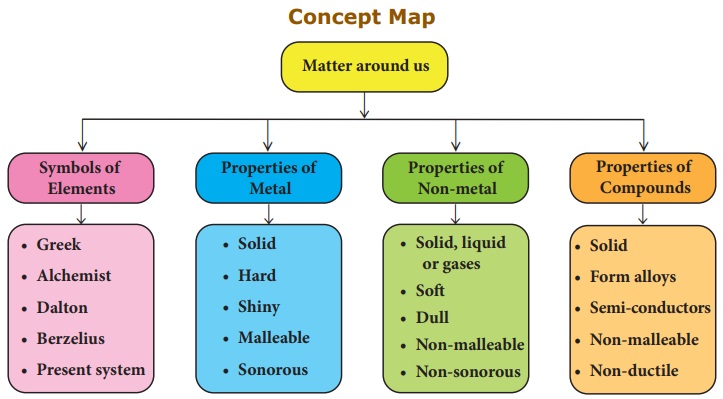 • Open the Browser and type the URL link given below (or) Scan the QR Code.

• States of Matter: Basics display on the screen. Follow this Experiment

• Click the next and to know about this states of matter