The progress of man towards civilization is linked with the discovery of several metals and non-metals.

An element can be identified as metal or non-metal by comparing its properties with the general properties of metals and non-metals. In doing so, we find that some elements neither fit with the metals nor with non-metals. Such elements are called semi-metals or metalloids. Elements are classified into metals, non-metals, and metalloids based on their properties.

Iron, copper, gold, silver, etc. that we use in our daily life are metals. The properties and uses of metals are given below.

a. Physical properties of Metals

• Metals are solid under normal conditions of temperature and pressure.

• Most metals are hard.

• All metals are shiny. The typical shine of metals is called metallic lustre.

• Metals in general have high melting point and boiling point.

• Metals can be hammered into very thin sheets. This tendency of metals is called malleability. Using this property aluminum is transformed into silvery foils.

• Metals can be drawn into thin wires. This property of metals is called ductility.

• Generally metals are good conductors of heat and electricity.

• On being hit, metals produce a typical sound. Hence, they are said to be sonorous. This property is being made used in making temple bells. 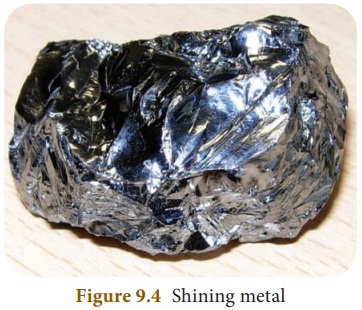 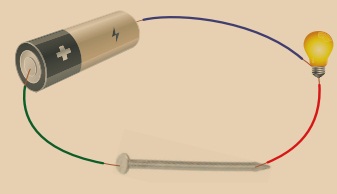 The bulb glows when the nail is connected because metal transfers energy, while the graphite lead produces heat energy.

b. Uses of Metals

• Copper is used for making electrical wires, coins and statue.

• Silver and gold are used for making jewels, and for decorative purposes and photography.

• Mercury is used in thermometers and barometers because of its high density and uniform expansion at different temperature.

• Aluminium is used in electrical wires, cables and in aerospace industries.

Elements like sulphur, carbon, oxygen etc. are non-metals. Some of the properties and uses of non-metals are given below.

a. Properties of Non-metals

• Non-metals are generally not hard except diamond ( a form of carbon).

• Non-metals have a dull appearance.

• Non-metals are generally soft and have low densities. The exception here is diamond (a form of carbon) which is the hardest naturally occurring substance.

• Non-metals are not ductile. Carbon fibre is highly ductile.

• Non-metals are generally bad conductors of electricity. Graphite (a form of carbon) is an exception.

• Non-metals do not produce sound (non-sonorous) when hit.

Strike a metal utensil with a metal spoon. Note the kind of sound emitted. Now, strike a piece of wood charcoal with the same spoon. Do you find difference in the kind of sound produced? Most metals produce ringing sound when struck i.e. they are sonorous. Non-metals are non sonorous. 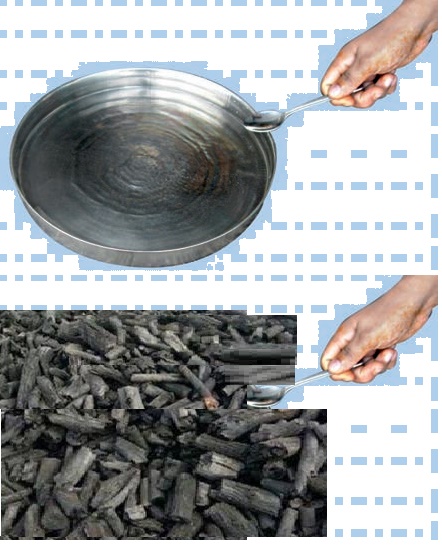 b. Uses of Non-metals

• Diamond (a form of carbon) is used for making jewels, cutting and grinding equipments. Graphite is used in making pencil lead.

• Sulphur is used in the manufacturing of gun powder and vulcanization of rubber.

• Nitrogen is used for manufacturing ammonia.

• Chlorine is used as a bleaching agent and in sterilizing water. 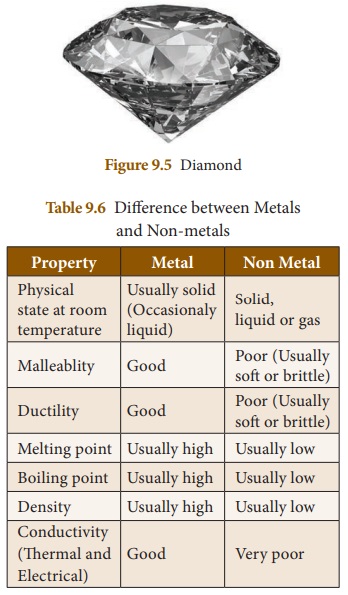