Major ingredients of concrete are:

Plain concrete, commonly known as concrete, is an intimate mixture of binding material, fine aggregate, coarse aggregate and water. This can be easily moulded to desired shape and size before it looses plasticity and hardens. Plain concrete is strong in compression but very weak in tension. The tensile property is introduced in concrete by inducting different materials and this attempt has given rise to RCC, RBC, PSC, FRC, cellular concrete and Ferro cement. In this chapter proportioning, mixing, curing, properties, tests and uses of plain concrete is dealt in detail. The other improved versions of concrete are explained and their special properties and uses are pointed out.

Major ingredients of concrete are:

Cement is the binding material. After addition of water it hydrates and binds aggregates and the surrounding surfaces like stone and bricks. Generally richer mix (with more cement) gives more strength. Setting time starts after 30 minutes and ends after 6 hours. Hence concrete should be laid in its mould before 30 minutes of mixing of water and should not be subjected to any external forces till final setting takes place.

Coarse aggregate consists of crushed stones. It should be well graded and the stones should be of igneous origin. They should be clean, sharp, angular and hard. They give mass to the concrete and prevent shrinkage of cement. Fine aggregate consists of river sand. It prevents shrinkage of cement. When surrounded by cement it gains mobility enters the voids in coarse aggregates and binding of ingradients takes place. It adds density to concrete, since it fills the voids. Denser the concrete higher is its strength.

Water used for making concrete should be clean. It activates the hydration of cement and forms plastic mass. As it sets completely concrete becomes hard mass. Water gives workability to concrete which means water makes it possible to mix the concrete with ease and place it in final position. More the water better is the workability. 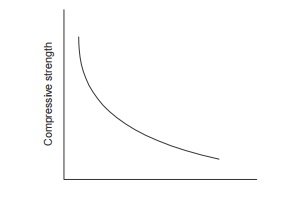 1.Workability: This is defined as the ease with which concrete can be compacted fully without seggregating and bleeding. It can also be defined as the amount of internal work required to fully compact the concrete to optimum density. The workability depends upon the quantity of water, grading, shape and the percentage of the aggregates present in the concrete.

Workability is measured by

(a) The slump observed when the frustum of the standard cone filled with concrete is lifted and removed.

(b) The compaction factor determined after allowing the concrete to fall through the compaction testing machine.

(c) The time taken in seconds for the shape of the concrete to change from cone to cylinder when tested in Vee-Bee consistometer.

The suggested values of workability for different works are as shown in Table 1.1.13.1.

2. Segregation: Separation of coarse particles from the green concrete is called segregation. This may happen due to lack of sufficient quantity of finer particles in concrete or due to throwing of the

concrete from greater heights at the time of placing the concrete. Because of the segregation, the cohesiveness of the concrete is lost and honey combing results. Ultimately it results in the loss of strength of hardened concrete. Hence utmost care is to be taken to avoid segregation.

3.  Bleeding: This refers to the appearance of the water along with cement particles on the surface of the freshly laid concrete. This happens when there is excessive quantity of water in the mix or due to excessive compaction. Bleeding causes the formation of pores and renders the concrete weak. Bleeding can be avoided by suitably controlling the quantity of water in the concrete and by using finer grading of aggregate

The following are some of the important tests conducted on concrete:

1. Slump Test: This test is conducted to determine the workability of concrete. It needs a slump cone for test (Fig. 3.3). Slump cone is a vessel in the shape of a frustum of a cone with diameter at bottom 200 mm and 50 mm at top and 300 mm high. This cone is kept over a impervious platform and is filled with concrete in four layers.

Each layer is tamped with a 16 mm pointed rod for 25 times. After filling completely the cone is gently pulled up. The decrease in the height of the concrete is called slump. Higher the slump, more workable is the concrete. The desired values of slumps for variousworks have been shown in Table 1.1.13.1 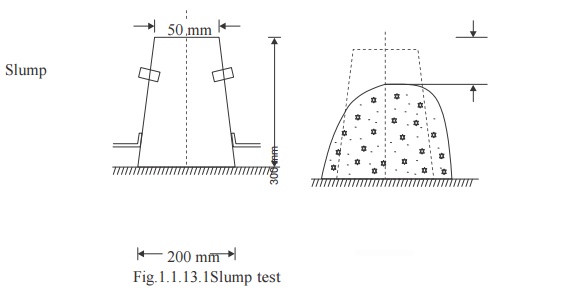 2. Compaction Factor Test: This is another test to identify the workability of concrete. This test is conducted in the laboratory. The test equipment consists of two hoppers and a cylinder fixed to a stand, the dimensions and the distances between the three vessels being standardized. Vessel A and B are having hinged bottoms whereas cylinder C is having fixed bottom. [Ref. Fig. 1.1.13.2]

Now cylinder is again filled with the sample of concrete in 50 mm layers, which is compacted by ramming and vibrating. Then the weight of compacted concrete is determined. Let this weight be W2.

Crushing Strength Test: Metallic moulds of size 150 mm × 150 mm × 150 mm are used for casting concrete cubes. Before filling mould, it is properly oiled on its inner surfaces, so that cubes can be easily separated. Fresh cube is filled with concrete to be tested in 3 layers and kept in the room. After 24 hours, cube is removed from the mould and kept under water for curing. After 28 days of curing cubes are tested in the compression testing machine. In this test cubes are placed over the smooth surface which is in contact with side plates of mould.

Appropriate quality and quantity of cement, fine aggregate, coarse aggregate and water should be used so that the green concrete has the following properties:

(b) No seggregation in transporting and placing (c) No bleeding and