When the area to be surveyed is large, chain and compass surveying is preferable. A compass is used to measure the magnetic bearing of a line. There are two forms of compass that are commonly used. 1. The prismatic compass and 2. The surveyors’ compass.

When the area to be surveyed is large, chain and compass surveying is preferable. A compass is used to measure the magnetic bearing of a line. There are two forms of compass that are commonly used. 1. The prismatic compass and 2. The surveyors’ compass.

1. The prismatic compass: It is circular in shape and its diameter varies from 85 mm to 110 mm. A pivot is provided at the centre of the box. It carries a magnetic needle. The needle is attached to an aluminum ring which is graduated to 1/2. A light spring break is attached to the inside of the base to damp the oscillations of the needle and bring it to rest before taking a reading.

A reflecting prism facilitates reading of the angles and is protected from moisture and dust etc by a prism cap. The prism base and vertical facts are made convex which magnifies the readings. the object vane is located diametrically opposite to the prism. It is hinged to the side of the box and carries a horse hair. A title reflecting mirror is provided on the side of the object vane to enable bearing of very high or low objects to be taken. A metal cover is provided to enclose the compass and the object vane. 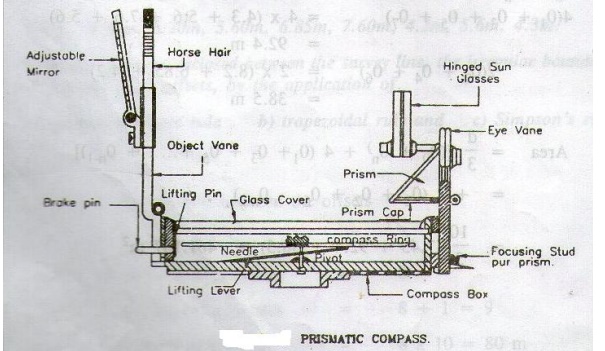 The compass is usually mounted on a light tripod which carries a vertical spindle in a ball and socket joint which the box is screwed. By means of this arrangement, the instrument can be quickly leveled and also rotated in a horizontal plane and clamped in any position. Centering: The compass should be centered over the station where the bearing is to be taken. This is done by dropping a small piece of stone from the centre of the compass so that it falls on the top of the peg marking the station (or by using plumb bob) and by adjusting the legs of the tripod.

Leveling : The compass should then be leveled by eye, by means of a ball and socket joint so that the graduated ring may swing quite freely. It should be clamped when leveled. Observing Bearing: A ranging rod is kept at the next station.

The compass is turned until the ranging rod at the station is bisected by the hair when looked through the slit above the prism.

When the needle comes to rest, by pressing the knob if necessary, the reading is noted at which the hair line appears to out the image of the graduated ring. The sighting og the ranging rod and the reading is done simultaneously. The reading gives the bearing of the line.

The bearing of a line is the horizontal angle made by the line with a selected reference line called the meridian. There are two types of bearings. 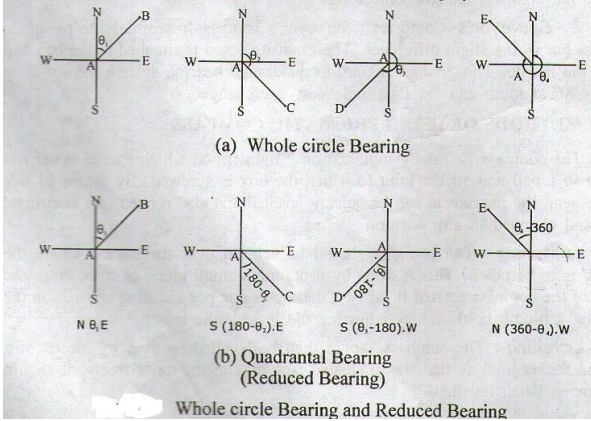 In this system the bearing of a line is measured with north in clockwise direction. The value of the bearing thus varies from 0o to 360o.

In this system the bearing of a line measured from either the north or the south, clockwise or counter clockwise whichever is nearer the line, towards the east or west

4 Fore bearing and back bearing 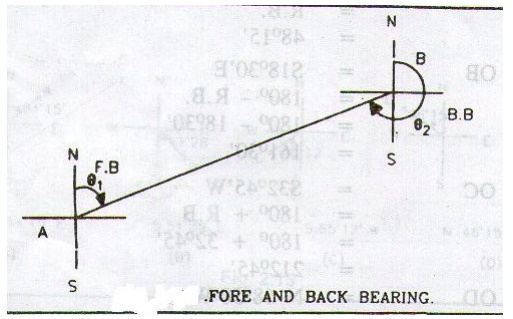