Pig and fish farming - Integrated farming of fish and livestock

In almost all the well-established integrated systems referred to above, herbivorous or omnivorous species of fish are used.

In almost all the well-established integrated systems referred to above, herbivorous or omnivorous species of fish are used. The most common species are the common and Chinese carps. The catfish Pangasius, Indian carps and species of tilapia have also been used on a limited scale. The major benefit to fish farming of integration is easy access to the manure which fertilizes the pond and produces plankton and other micro-organisms to feed the fish.

The feeding habits of the fish, particularly carps, make such integrated farming possible and beneficial.

As mentioned earlier, it is a common practice to have wider embankments in fish ponds to facilitate the building of pig sties and also planting of fruit trees, vegetables or other crops. In China, embankments in integrated farms may be over 10m wide and planted with groundnuts, vegetables, colza, corn, sugar cane, mulberry, bananas, castor, etc. (fig. 30.1). The slopes are planted with grass, which can be used as fodder for grass carp and also for other farm animals like cattle.Feeder channels and irrigation ditches associated with the pond farms are used for growing aquatic plants, such as azolla, duck weed,water hyacinth (Eichhornia crassipes),and Pistia stratiotis, which are used for feeding thepigs. The control of macrovegetation in tropical fish ponds is a major problem, but in the integrated farming as practised in China, such vegetation is considered a valuable food resource. 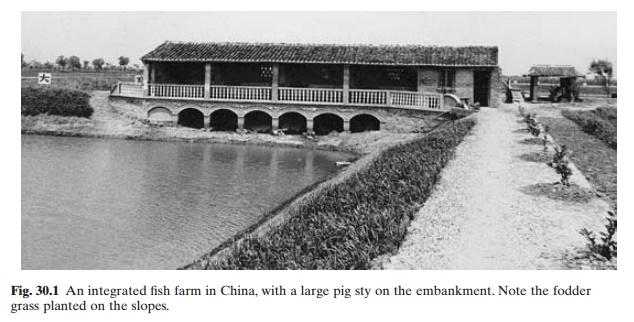 Fairly high rates of stocking are practised, as the productivity is generally high. Because of the variety of food materials which become available in the ponds, polyculture is more commonly practised. A total of about 60000 early fingerlings of different species weighing 20–30g are stocked per ha of ponds.

Pig sties are built on the pond embankments or on neighbouring land. The number of pigs reared in relation to the pond area differs (figs 30.1 and 30.2). In China about 45–75 pigs per ha are generally raised, but some farms have up to 90 pigs per ha. The average production of manure (faeces and urine) per pig is around 7.8–8 tons per annum. This amounts to 351–600 tons of manure/ha per year and a very high loading of organic matter in the ponds. According to Chen and Li (1980), even higher rates of 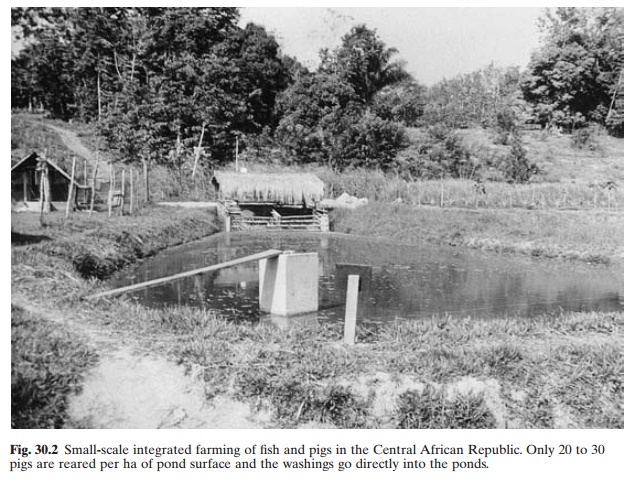 150–300 pigs per ha of pond area are maintained in Taiwan. Considerable care and water management skills are required to prevent pollution of the water and mortality of the stock. It has to be remembered that the number of pigs raised per ha and the manuring rates are worked out empirically, based on years of experience. Experimental work seems to indicate that satisfactory fish production can be obtained with much lower manuring (Buck et al., 1979). Under Hungarian conditions, themaximum loading possible is reported to be 600kg/ha per day, when manure is placed in localized heaps in the ponds (Woynarovich, 1980). The output of manure depends on the size and age of the pig. While a piglet gives about 3.4kg manure a day, a one-year-old pig will produce about 12.5kg a day. It is now a common practice to avoid direct washing of the wastes into the ponds. The wastes are conveyed to a specially built tank, where sedimentation and fermentation of the manure take place. At regular intervals, the supernatant liquid from the tank is allowed to flow into the ponds. The sludge that remains is removed for fertilizing agricultural crops. Thus the loading of decomposable organic matter in the ponds is reduced. The chemical composition of pig wastes is presented (see Table 7.18). The waste output and chemical composition depend on the quality and quantity of food and water consumed by the pigs.

Traditionally, the pigs in integrated farms depend on feedstuffs produced on the farm. As stated earlier, several aquatic plants such as the water hyacinth, Ipomoea, Pistia, Wolffia, Lemna and Azolla are grown in the canals and associated water bodies near the farm. These, as well as the foliage of several terrestrial plants such as vegetables, corn, rice and leguminous plants, are utilized as feedstuffs for pigs. Over 10 tons of aquatic plants can be produced in one ha of water area and this is considered enough to feed 10 pigs. These plant materials are generally mixed with rice bran, bananas, coconut meal, soybean wastes, fish meal, etc., for feeding to the pigs.

The duration of the culture of fish and pigs varies, but generally it is about one year. The yield of fish is reported to vary from 2 to 18 tons/ha per annum. The pigs are generally sold when about 90–100kg in weight. The overall

economics of combined fish and pig raising depend on the local conditions. It has however, been clearly demonstrated in many areas that the adoption of such integrated farming increases the productivity per area and input, and it also increases the farmer’s income by a factor of two or more. Table 30.1 presents the annual operating costs and returns of a pig/fish farm in Malaysia, which illustrates the economic benefits derived. 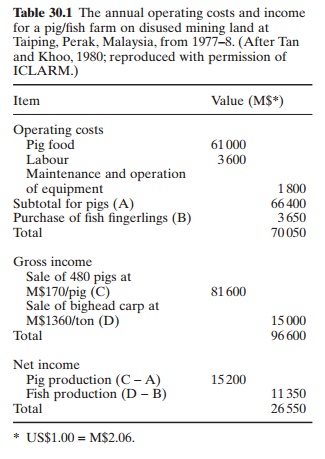