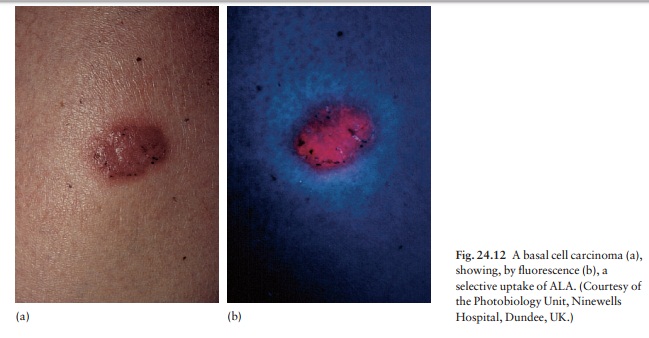 Ultraviolet radiation (UVR) helps some conditions (e.g. psoriasis, atopic dermatitis, nummular eczema, parapsoriasis, pityriasis lichenoides, pityriasis rosea, acne and cutaneous T-cell lymphoma; Table 16.4). For psoriasis, UVB  may be given up to three times weekly, for 3–8 weeks, on its own or combined with tar (Goeckerman) treatment or dithranol (anthralin; Ingram) treatment .

After tests to establish a starting dose, irradiance is increased by small increments, aiming to produce minimal ery-thema only after 24 h. Ultraviolet A is combined with psoralens in PUVA treatment. Close supervi-sion is needed because extreme phototoxicity from an overdose, from sunlight or concomitant use of tanning booths, has produced severe burns and even death. A careful record should also be kept of the cumulative UVR dose as the risk of developing skin cancers, including malignant melanoma, is increased when a patient has received a large cumulative dose.

Photodynamic therapy (PDT) is a new form of photo-therapy used for skin cancers and precancers such as superficial basal cell carcinoma less than 2 mm thick), intraepidermal carcinoma, erythro-plasia of Queyrat  and actinic keratoses. Selective tumour destruction is achieved by incorporating the photosensitizer in the target (malig-nant) tissue and then activating it with either a laser or non-laser light source. A promising combination is the naturally occurring porphyrin precursor, amino-laevulinic acid (ALA) and irradiation with a red light. The water-soluble ALA (20% in Unguentum M) is applied topically, under occlusion, to the tumour. After 4 h or so, when the ALA has been selectively absorbed by the tumour (Fig. 24.12), the area is exposed to the light for 15–60 min. The activated ALA converts molecular oxygen to cytotoxic sing-let oxygen and free radicals, which in turn cause ischaemic necrosis of the tumour by damaging cell membranes, especially those in the walls of blood ves-sels. 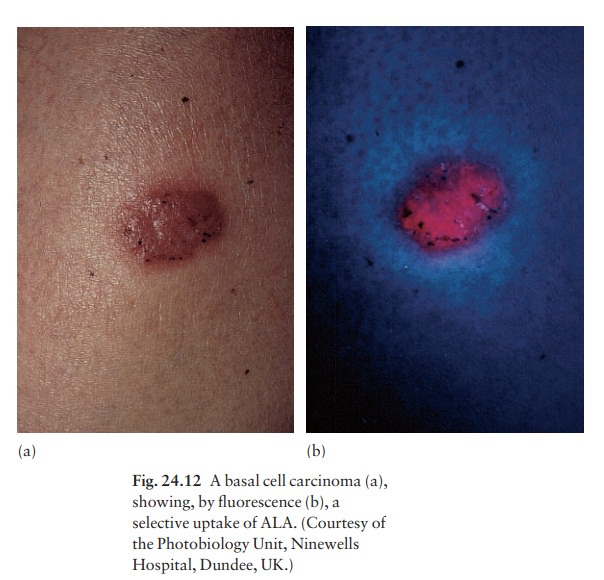 PDT is carried out in an outpatient setting and its potential advantages over standard treatments include:

•   ability to treat many lesions at once;

•   rarely causes ulceration and leads to a good cos-metic result;

useful for treating tumours on sites that present sur-gical difficulty, e.g. the taut skin of the finger (Fig. 24.13) 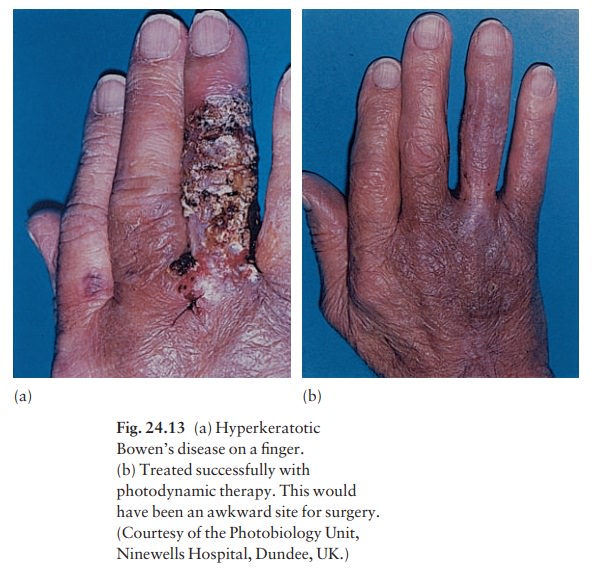