Pertussis is a prolonged illness caused by toxins produced by B. pertussis bacteria attached to the cilia of respiratory epithelial cells.

Pertussis is a prolonged illness caused by toxins produced by B. pertussis bacteria attached  to the  cilia of respiratory  epithelial  cells.  It progresses in stages over many weeks beginning with a rhinorrhea (runny nose) that evolves into a persis- tent cough. The name “whooping cough” comes from children who exhibit an in- spiratory “whoop” following an exhausting series of paroxysmal coughs.

B. pertussis is spread byairborne droplet nucleiproduced bypatientsin the earlystagesof illness. It is highly contagious, infecting 80 to 100% of exposed susceptible persons. Secondary spread in families, schools, and hospitals is rapid. Sporadic epidemics occur, but there is no strong seasonal pattern. B. pertussis is not found in animals and survives poorly in the environment. Asymptomatic carriers are very rarely found. However, infec-tions in previously immunized adults have become an increasingly important reservoir, because the mild symptoms are often not recognized as any more than a “bad cold.” Un-witting adults have served as the source for outbreaks in highly susceptible populations, such as infants in a newborn nursery. Mortality remains the highest in infants, with over 70% of fatal cases occurring in children under 1 year of age.

After the introduction of immunization in the 1940s, the incidence of pertussis in the United States dropped from over 250,000 cases a year to well below one case per 100,000 population. Since the 1980s, a slow rise, augmented by epidemics every 3 to 4 years, has resulted. The 7796 cases reported in 1996 was a 30-year high. The greatest increase has been in the 10- to 20-year-age group. In general, pertussis has increased when immuniza-tion rates have fallen largely due to concerns about vaccine reactions. For example, when childhood immunization rates in England fell below 50% in 1981, pertussis cases rose dramatically. There were 47,000 cases in the first 9 months of 1982 alone.

B. pertussis is a strict human pathogen. When introduced into the respiratory tract, the or-ganism has a remarkable tropism for ciliated bronchial epithelium attaching to the cilia themselves. This adherence is mediated by Fha, pili, pertactin, and the binding subunits of PT. Once attached, the bacteria immobilize the cilia and begin a sequence in which the cil-iated cells are progressively destroyed and extruded from the epithelial border (Fig 24 – 3). This local injury is caused primarily by the action of the tracheal cytotoxin. This produces an epithelium devoid of the ciliary blanket, which moves foreign matter away from the lower airways. Persistent coughing is the clinical correlate of this deficit. Although consid-erable local inflammation and exudate are produced in the bronchi, B. pertussis does not directly invade the cells of the respiratory tract or spread to deeper tissue sites. 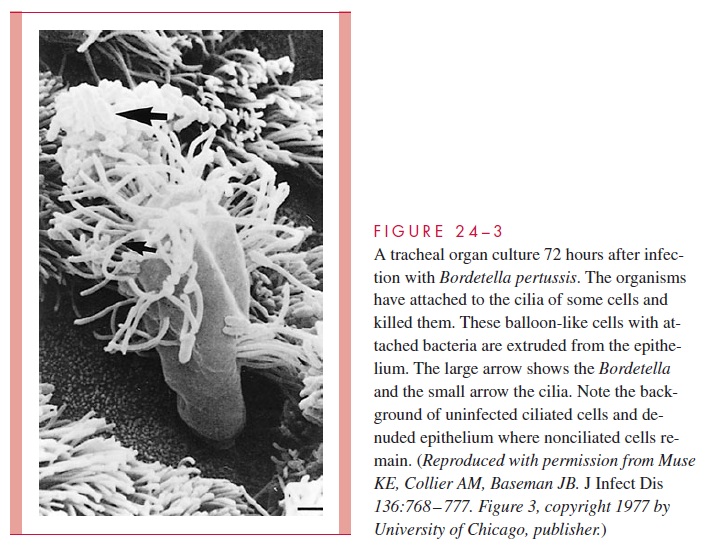 In addition to the local effects on the bronchial epithelium, the virulence factors of B. per-tussis contribute to the disease in many other ways.

The combined action of PT and adenylate cyclase on neutrophils, macrophages, and lymphocytes creates paralysis and even death of these crucial effector cells of the immune system. Many of the systemic manifestations of the disease such as lymphocytosis, histamine sensitization, and insulin secretion are due to the action of circulating PT absorbed at the primary infection site. The specific biologic effect depends on how disruption of G-protein regulation by PT is manifested by the host cell type the toxin reaches. Pertussis is the result of a well-orchestrated delivery by B. pertussis of toxic and adhesive factors to host cells at local and distant sites to produce a disease that persists for many weeks.

How B. pertussis deploys its repertoire of virulence genes is a model for the control of bacterial pathogenicity (Fig 24 – 4). B. pertussis regulates the synthesis of PT, the invasive adenylate cyclase, Fha, pili, and many other genes through genetic loci that control the ex-pression of at least 20 unlinked chromosomal genes at the transcriptional level. Expression is modulated by changes in specific environmental parameters, including temperature. 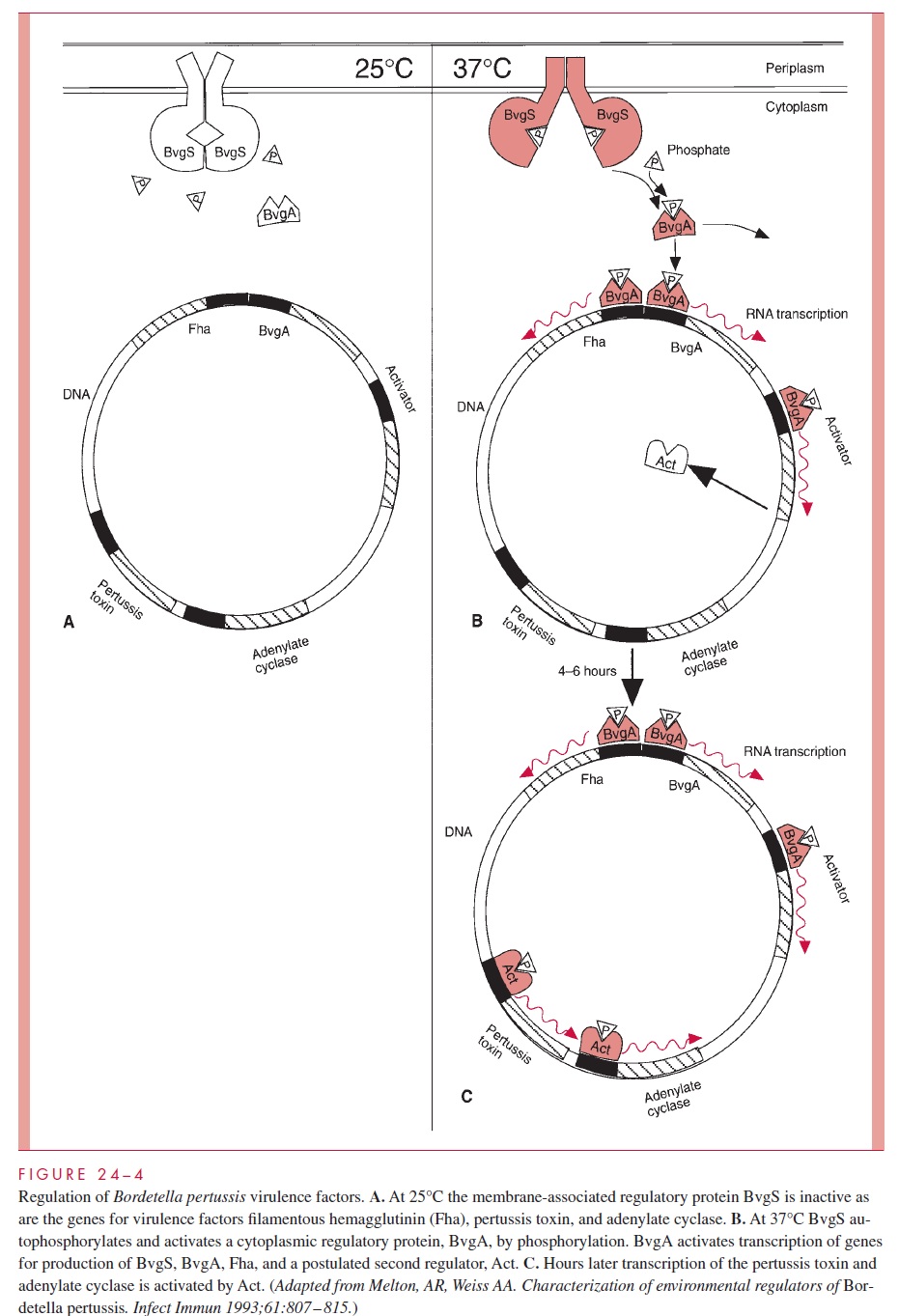 Transcriptional regulation is controlled by a two-compartment system, which involves a regulatory protein that spans the bacterial membrane (BvgS) and an activator protein in the cytoplasm (BvgA). The membrane protein has a periplasmic domain that responds to temperature or ionic changes. When the temperature changes from 25°C to 37°C, it au-tophosphorylates and subsequently donates a phosphate group to the cytoplasmic protein, allowing it to bind to DNA recognition sequences in the chromosome. There it promotes the transcription of its own gene and those located in an operon containing at least the Fha and pilin structural genes. Experimentally, Fha, pilin, and BvgA mRNA are produced at this point, followed about 6 hours later by PT and adenylate cyclase. This delay is be-lieved to be due to the time required for the production of a second BvgS directed activa-tor which then turns on these genes.

Thus, the induction of virulence factors in B. pertussis is sequential, with adhesin ex-pression (Fha and pili) preceding expression of factors involved in tissue injury. The finely honed responses of B. pertussis virulence factors to changes in temperature and ionic conditions presumably play a role in the pathogenesis of infection and help the or-ganism adapt in a stepwise fashion to the diverse local conditions within the human respi-ratory tract.

Although IgG antibodies are produced to PT, pili, and pertactin during the course of nat-ural infection and by immunization, they are not long lasting and their role in immunity is not well understood. Naturally acquired immunity is not lifelong, although second at-tacks, when recognized, tend to be mild. The high susceptibility of newborns and infants before immunization may reflect a low level of antibody in adults and thus lack of passive transfer to the infant at birth.