Of the major acute Hib infections, meningitis accounts for just over 50% of cases.

Of the major acute Hib infections, meningitis accounts for just over 50% of cases. The remaining are distributed among pneumonia, epiglottitis, septicemia, cellulitis, and septic arthritis. Localized infections can be caused by capsulated strains including Hib, but most are noncapsulated H. influenzae.

Hib meningitis follows the same pattern as other causes of acute purulent bacterial meningitis . Meningitis is often preceded by signs and symptoms of an upper respiratory infection, such as pharyngitis, sinusitis or otitis media. Whether these represent a predisposing viral infection or early invasion by the organism is not known.

Just as often, meningitis is preceded by vague malaise, lethargy, irritability, and fever. Mortality is 3 to 6% despite appropriate therapy, and roughly one third of all survivors have significant neurologic sequelae.

Acute epiglottitis is a dramatic infection in which the inflamed epiglottis and surrounding tissues obstruct the airway. Hib is one of a number of causes. The onset is sudden, with fever, sore throat, hoarseness, an often muffled cough, and rapid progression to severe prostration within 24 hours. Affected children have air hunger, inspiratory stridor, and re-traction of the soft parts of the chest with each inspiration. The hallmark of the disease is an inflamed, swollen, cherry-red epiglottis that protrudes into the airway (Fig 24 – 1) and can be visualized on lateral x-rays. As with meningitis, this infection is treated as a med-ical emergency, with prime emphasis on antimicrobics and maintenance of an airway (tra-cheostomy or endotracheal intubation). Manipulations, including routine examination or attempting to take a throat swab, can trigger a fatal laryngospasm and acute obstruction.

A tender, reddish-blue swelling in the cheek or periorbital areas is the usual presentation of Hib cellulitis. Fever and a moderately toxic state are usually present, and the infection may follow an upper respiratory infection or otitis media. Joint infection begins with fever, irritability, and local signs of inflammation, often in a single large joint. Haemophilus arthritis is occasionally the cause of a more subtle set of findings, in whichfever occurs without clear clinical evidence of joint involvement. Bacteremia is often present in both cellulitis and arthritis.

H. influenzae is an important cause of conjuctivitis, otitis media, and acute and chronicsinusitis. It is also one of several common respiratory organisms that can cause and exac-erbate chronic bronchitis. Most of these infections are caused by nonencapsulated strains and usually remain localized without bacteremia. Disease may be acute or chronic, depending on the anatomic site and underlying pathology. For example, otitis media is acute and painful because of the small, closed space involved, but after antimicrobic ther-apy and reopening of the eustachian tube, the condition usually clears without sequelae. The association of H. influenzae with chronic bronchitis is more complex. There is evi-dence that H. influenzae and other bacteria play a role in inflammatory exacerbations, but a unique cause-and-effect relationship has been difficult to prove. The underlying cause of the bronchitis is usually related to chronic damage resulting from factors such as smoking. Haemophilus pneumonia may be caused by either encapsulated or nonencapsu-lated organisms. Encapsulated strains have been observed to produce a disease much like pneumococcal pneumonia; however, unencapsulated strains may also produce pneumo-nia, particularly in patients with chronic bronchitis.

The combination of clinical findings and a typical Gram smear is usually sufficient to make a presumptive diagnosis of Haemophilus infection. The tiny cells are usually of uni-form shape except in cerebrospinal fluid, where some may be elongated to several times their usual length. The diagnosis must be confirmed by isolation of the organism from the site of infection or from the blood. Blood cultures are particularly useful in systemic H. influenzae infections, because it is often difficult to obtain an adequate specimen di-rectly from the site of infection. Bacteriologically, small coccobacillary Gram-negative rods that grow on chocolate agar but not blood agar strongly suggest Haemophilus. Confirmation and speciation depends on demonstration of the requirement for X and V factors and/or biochemical tests. Serotyping is unnecessary for clinical purposes but im-portant in epidemiologic and vaccine studies.

H. influenzae is often susceptible in vitro to ampicillin and amoxicillin, and usually sus-ceptible to the newer cephalosporins, tetracycline, aminoglycosides, and sulfonamides. It is less susceptible to other penicillins and to erythromycin. Since the 1970s, the therapy of systemic infections has been complicated by the emergence of strains that produce a plasmid-mediated β-lactamase identical to that found in Escherichia coli. The frequency of resistant strains varies between 5 and 50% in different geographic areas. Ampicillin-resistant strains that do not produce β-lactamase also occur but are less common. Current practice is to start empiric therapy with a third-generation cephalosporin (eg, ceftriaxone, cefotaxime), which can be changed to ampicillin if susceptibility tests indicate that the in-fecting strain is susceptible.

Purified PRP vaccines became available in 1985; however, due to the typically poor immune response of infants to polysaccharide antigens, their use was limited to children 24 months of age and older. Because immunization at this age misses the group most sus-ceptible to Hib invasive disease, a new vaccine strategy was needed that included im-proved stimulation of T cell – dependent immune responses in infants. To achieve this, three PRP-protein conjugate vaccines were developed using proteins derived fromCorynebacterium diphtheriae (toxoid, CRM 197) or N. meningitidis (outer membraneprotein). The first PRP – protein conjugate vaccines were licensed in 1989, and by late 1990, they were recommended for universal immunization beginning at 2 months of age. As illustrated in Figure 24 – 2, the impact has been dramatic (see Epidemiology). So far this 99% reduction in what was the most common cause of childhood meningitis has not been accompanied by an increase in disease by either the non – type b strains or other causes of meningitis. An unexpected concomitant finding has been a dramatic drop in H. influenzae colonization rates in immunized populations. 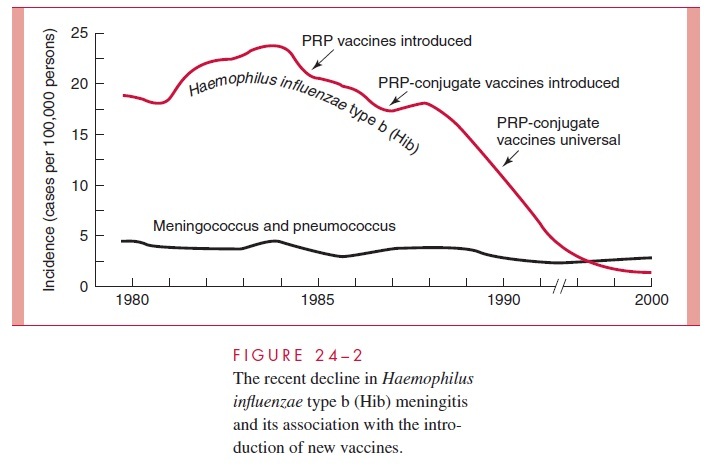