Before discussing the fundamentals of the measurement of the apparent charge some remarks concerning the PD currents i will be helpful, as much of the research work has been and is still devoted to these currents, which are difficult to measure with high accuracy.

Before discussing the fundamentals of the measurement of the apparent charge some remarks concerning the PD currents i will be helpful, as much of the research work has been and is still devoted to these currents, which are difficult to measure with high accuracy. The difficulties arise for several reasons. If V is an a.c. voltage, the main contribution of the currents flowing within the branches CK and Ct of Fig. 5.10 are displacement currents C dV/dt, and both are nearly in phase. The PD pulse currents i with crest values in the range of sometimes smaller than 104 A, are not only small in amplitude, but also of very short duration. If no stray capacitance in parallel to CK were present, I would be the same in both branches, but of opposite polarity. For accurate measurements, a shunt resistor with matched coaxial cable may be introduced in the circuit as shown in Fig. 5.11. The voltage across the CRO(or transient recorder) input .Only if the capacitance of the test object is small, which is a special case, will the voltages referring to the PD currents i be clearly distinguished from the displacement currents i

Improvements are possible by inserting an amplifier (e.g. active voltage probe) of very high bandwidth at the input end of the signal cable. In this way the signal cable is electrically disconnected from R. High values of R,however, will introduce measuring errors, which are explained with Fig. 5.12.A capacitance C of some 10 pF, which accounts for the lead between Ctand earth as well as for the input capacitance of the amplifier or other stray capacitances, will shunt the resistance R and thus bypass or delay the very high-frequency components of the current i. Thus, if i is a very short current pulse, its shape and crest value are heavily distorted, as C will act as an integrator. Furthermore, with R within the discharge circuit, the current pulse will be lengthened, as the charge transfer even with C D 0 will be delayed by a time constant RCtCK/Ct C CK. Both effects are influencing the shape of the original current pulse, and thus the measurement of i is a tedious task and is only made for research purposes.

All measured data on current shapes published in many papers are suffering from this effect. One may, however, summarize the results by the following statements. Partial discharge currents originated in voids within solids or liquids are very short current pulses of less than a few nanoseconds duration. This can be understood, as the gas discharge process within a very limited space is developed in a very short time and is terminated by the limited space for movement of the charge carriers. Discharges within a homogeneous dielectric material, i.e. a gas, produce PD currents with a very short rise time5nsec and a longer tail. Whereas the fast current rise is produced by the fast avalanche processes the decay of the current can be attributed to the drift velocity of attached electrons and positive ions within the dielectric. Discharge pulses in atmospheric air provide in general current pulses of less than about 100 nsec duration.

Longer current pulses have only been measured for partial discharges in fluids or solid materials without pronounced voids, if a number of consecutive discharges take place within a short time. In most of these cases the total duration of I is less than about 1 μsec, with only some exceptions e.g. the usual bursts of discharges in insulating fluids. All these statements refer to test circuits with very low inductance and proper damping effects within the loop CK Ct. The current I however, may oscillate, as oscillations are readily excited by the sudden voltage drop across Ct. Test objects with inherent inductivity or internal resonant circuits,e.g. transformer or reactor/generator windings, will always cause oscillatory current pulses. Such distortions of the PD currents, however, do not change the transferred charge magnitudes, as no discharge resistor is in parallel to CKor Ct. To quantify the‘ individual apparent charge magnitudes‘ qi for the repeatedly occurring PDpulses which may have quite specific statistical distributions, a measuring system must be integrated into the test circuit which fulfils specific requirements. Already at this point it shall be mentioned that under practical environment conditions quite different kinds of disturbances (background noise)are present, which will be summarized in a later section. Most PD measuring systems applied are integrated into the test circuit in accordance with schemes shown in Figs 5.13 (a) and (b), which are taken from the new IEC

Standard31 which replaces the former one as issued in 1981.Within these ‗straight detection circuits‘, the coupling device ‗CD‘ with its input impedance Zmi forms the input end of the measuring system. As indicated in Fig. 7.20(a), this device may also be placed at the high-voltage terminal side, which may be necessary if the test object has one terminal earthed. Optical links are then used to connect the CD with an instrument instead ofa connecting cable ‗CC‘.

Some essential requirements and explanations with reference to these figures as indicated by the standard are cited here: the coupling capacitor Ck shall be of low inductance design and should exhibit a sufficiently low level of partial discharges at the specified test voltage to allow the measurement of the specified partial discharge magnitude.

The main difference between these two types of PD detection circuits is related to the way the measuring system is inserted into the circuit. InFig.5.13 (a), the CD is at ground potential and in series to the coupling capacitors as it is usually done in praxis. In Fig. 5.14(b), CD is in series with the test object Ca.

Here the stray capacitances of all elements of the high-voltage side to ground potential will increase the value of Ck providing a somewhat higher sensitivity for this circuit according to eqn . The disadvantage is the possibility of damage to the PD measuring system, if the test object fails. The new IEC Standard defines and quantifies the measuring system characteristics. The most essential ones will again be cited and further explained below: 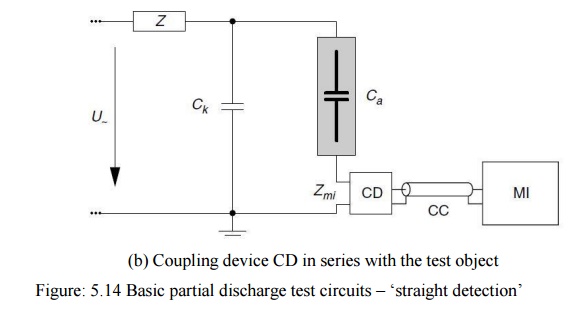 The transfer impedance Zis the ratio of the output voltage amplitude to a constant input current amplitude, as a function of frequency f, when the input is sinusoidal. This definition is due to the fact that any kind of output signal of a measuring instrument (MI) as used for monitoring PD signals is controlled by a voltage, whereas the input at the CD is a current. The lower and upper limit frequencies f1 and f2 are the frequencies at which the transfer impedance Z has fallen by 6 dB from the peak passbandvalue.Midband frequency fm and bandwidth of: for all kinds of measuring systems, the midland frequency is defined by:

The superposition error is caused by the overlapping of transient output pulse responses when the time interval between input current pulses is less than the duration of a single output response pulse. Superposition errors may be additive or subtractive depending on the pulse repetition rate n of the input pulses. In practical circuits both types will occur due to the random nature of the pulse repetition rate. This rate ‗n‘ is defined as the ratio between the total number of PD pulses recorded in a selected time interval and the duration of the time interval.

The pulse resolution time Tr is the shortest time interval between two consecutive input pulses of very short duration, of same shape, polarity and charge magnitude for which the peak value of the resulting response will change by not more than 10 per cent of that for a single pulse. The pulse resolution time is in general inversely proportional to the bandwidth of the measuring system. It is an indication of the measuring system‘s ability to resolve successive PD events. The integration error is the error in apparent charge measurement which occurs when the upper frequency limit of the PD current pulse amplitudespectrumis lower than (i) the upper cut-off frequency of a wideband measuring system or (ii) the mid-band frequency of a narrow-band measuring system. The last definition of an ‗integration error‘ will need some additional explanation. PD measuring systems quantifying apparent charge magnitudes are band-pass systems, which predominantly are able to suppress the high-power frequency displacement currents including higher harmonics. The lower frequency limit of the band-pass f1 and the kind of ‗roll-off‘ of the bandpasscontrol this ability. Adequate integration can thus only be made if the‘ pass-band‘ or the flat part of the filter is still within the constant part of the amplitude frequency spectrum of the PD pulse to be measured. Figure 5.14,

A band-pass of the measuring system

B amplitude frequency spectrum of the PD pulse

Again taken from the new standard, provides at least formal information about correct relationships. More fundamental information may be found within some specific literature.