Ø   The function of an electric power system is to convert energy from one of the naturally available forms to electrical from and to transport it to points of consumption.

Ø   A properly designed and operated power system should meet the following fundamental requirement.

1.     Adequate „spinning reserve’ must be present to meet the active and reactive power demand.

3.     The power quality must have certain minimum standards within the tolerance or limit such as,

The three main controls involved in powers are:

The plant level control consists of:

Ø   Governor control or Prime mover controls are concerned with speed regulation of the governor and the control of energy supply system variables such as boiler pressure, temperature and flows.

Ø   Speed regulation is concerned with steam input to turbine.

Ø   With variation in load, speed of governor varies as the load is inversely proportional to speed.

Ø   The speed of the generator varies and the governor senses the speed and gives a command signal, so that, the steam input of the turbine is changed relative to the load requirement.

Ø   The function of Automatic Voltage Regulator (AVR) or Excitation control is to regulate generator voltage and relative power output.

These controls are depicted in given figure 1.4 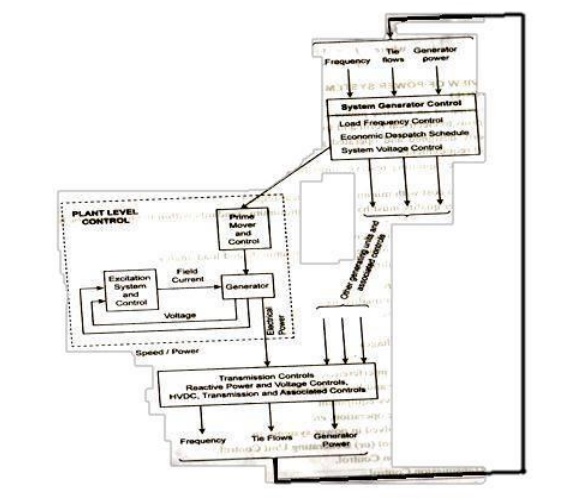 Ø   The purpose of system generation control is to balance the total system generation against system load and losses, so that, the desired frequency and power interchange with neighboring systems are maintained.

Ø    This involves the sensing of the bus bar frequency and compares with the tie line power frequency.

Ø    The difference of the signal is fed to the integrator and it is given to speed changer which generates the reference speed for the governor.

Ø    Thus, the frequency of the tie line is maintained as constant.

Ø   When the economical load distribution between a number of generator units is considered, it is found that the optimum generating schedule is affected when an incremental increased at one of the units replaces a compensating decrease at every other unit, in term of some incremental cost.

Ø   Optimum operation of generators at each generating station at various station load levels is known as unit commitment.

Ø   This involves the process of controlling the system voltage within tolerable limits.

Ø   The controls described above contribute to the satisfactory operation of the power system by maintaining system voltages, frequency and other system variables within their acceptable limits.

Ø   They also have a profound effect on the dynamic performance of power system and on its ability to cope with disturbances.

Ø   The main objective of real time power system operation requires a process guided by control and decisions based on constant monitoring of the system condition.

Ø   The power system operation is split into two levels.

Ø   The condition of the system is continuously observed I the control centres by protective relays for faults or contingencies caused by equipment trouble and failure.

Ø   If any of these monitoring devices identifies a sufficiently severe problem at the sample time, then the system is in an abnormal condition.

Ø    If no such abnormality is observed, then the system is in a normal condition.

Ø   At each sample, the proper commands are generated for correcting the abnormality on protecting the system from its consequences.

Ø   If on abnormality is observed, then the normal operation proceeds for the next sample interval.