Organic nitrates have been used in the therapy of angina pectoris routinely for more than 140 years, and their use is increasingly favored in a variety of other cardiac conditions, such as decompensated congestive heart failure and acute myocardial infarction.

Organic nitrates have been used in the therapy of angina pectoris routinely for more than 140 years, and their use is increasingly favored in a variety of other cardiac conditions, such as decompensated congestive heart failure and acute myocardial infarction. The pro-totype of these agents is nitroglycerin. Other common organic nitrates are isosorbide mononitrate (Ismo), isosorbide dinitrate (Isordil, Sorbitrate) and pentaery-thritol tetranitrate (Peritrate). With the exception of ni-troglycerin, which is a liquid having a high vapor pres-sure, these compounds are solid at room temperature. All organic nitrates are very lipid soluble.

The mechanism of action of nitroglycerin and other or-ganic nitrates is thought to involve an interaction with nitrate receptors that are present in vascular smooth muscle. Intact vascular endothelium is not necessary for the vasodilator action of the nitrates to be produced. The nitrate receptor possesses sulfhydryl groups, which reduce nitrate to inorganic nitrite and nitric oxide (NO). The formation of nitrosothiols, and possibly free NO, has been proposed to stimulate intracellular solu-ble guanylate cyclase, which leads to an increase in in-tracellular cyclic guanosine monophosphate (GMP) formation (Fig. 17.1). The increase in GMP results in vascular smooth muscle relaxation, possibly through in-hibition of calcium entry via L-type calcium channels, decreased calcium release from the sarcoplasmic reticu-lum, or via an increase in calcium extrusion via a sar-colemmal Ca++ -adenosine triphosphatase (ATPase). 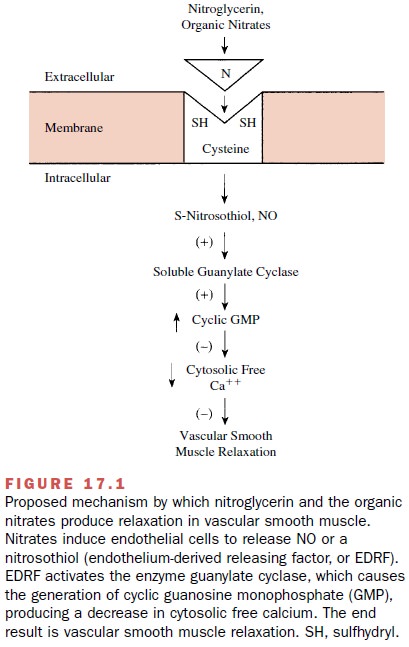 Nitroglycerin is a lipid-soluble substance that is rapidly absorbed across the sublingual or buccal mucosa. Its on-set of action occurs within 2 to 5 minutes, with maximal effects observed at 3 to 10 minutes. Little residual activ-ity remains 20 to 30 minutes after sublingual adminis-tration.

Nitroglycerin and other organic nitrate esters un-dergo first-pass metabolism and are rapidly metabo-lized in the liver by the enzyme glutathione organic nitrate reductase. Although the metabolites of nitro-glycerin are virtually inactive as vasodilators, two metabolites of isosorbide dinitrate, isosorbide 2-mononitrate and isosorbide 5-mononitrate, do retain some vasodilator and antianginal activity. Isosorbide mononitrate can be administered orally and does not undergo any first-pass metabolism. The latter esters and their metabolites are water soluble and are readily ex-creted by the kidney.

There is little doubt concerning the effectiveness of ni-troglycerin in the treatment of angina pectoris. However, the exact mechanism by which the drug acts to reduce myocardial ischemia is still controversial (Fig. 17.2). Although nitroglycerin dilates both peripheral ca-pacitance and resistance vessels, the effect on the ve-nous capacitance system predominates. Dilation of the capacitance vessels leads to pooling of blood in the veins and to diminished venous return to the heart (de-creased preload). This reduces ventricular diastolic vol-ume and pressure and shifts blood from the central to the peripheral compartments of the cardiovascular sys-tem. These effects of nitroglycerin and other organic ni-trates are similar to those of mild phlebotomy, which has been shown clinically to relieve acute anginal at-tacks by decreasing circulating blood volume. 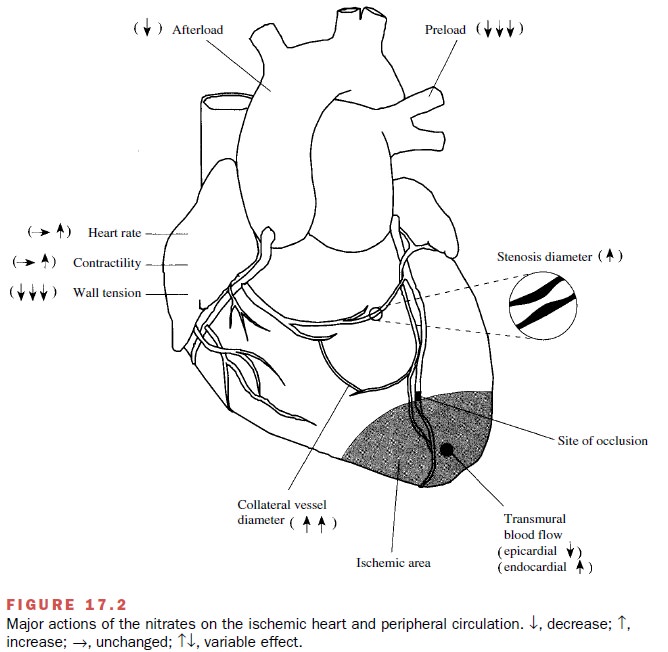 According to Laplace’s law, a reduction in ventricu-lar pressure and heart size results in a decrease in the myocardial wall tension that is required to develop a given intraventricular pressure and therefore decreases oxygen requirement. Since blood flow to the subendo-cardium occurs primarily in diastole, the reduction in left ventricular end diastolic pressure induced by nitro-glycerin reduces extravascular compression around the subendocardial vessels and favors redistribution of coronary blood flow to this area.

This effect of nitro-glycerin on the distribution of coronary flow is impor-tant because the subendocardium is particularly vulner-able to ischemia during acute anginal attacks.

Thus, nitroglycerin relieves the symptoms of angina by restoring the balance between myocardial oxygen supply and demand. Oxygen demand is lowered as a consequence of the reduction in cardiac preload and af-terload, and this results in a decrease in myocardial wall tension. Oxygen supply to the subendocardium of isch-emic areas is increased because extravascular compres-sion around the subendocardial vessels is reduced. In addition, nitroglycerin may increase blood flow to isch-emic areas by its direct vasodilator effect on eccentric epicardial coronary artery stenoses and collateral blood vessels and by its action to inhibit platelet aggregation. Other organic nitrates are thought to exert the same beneficial actions as nitroglycerin.

Recent findings suggest a potential new action of ni-trates in the treatment of patients with ischemic heart disease. Administration of intravenous (IV) or trans-dermal nitroglycerin to conscious rabbits exerts a pro-tective effect against myocardial infarction that persists for 72 hours; this effect has been termed late precondi-tioning. The magnitude of this effect was also found to persist in animals that displayed tolerance to the vascu-lar effects of nitroglycerin. Although this effect of nitro-glycerin has not been demonstrated unequivocally in patients receiving long-term nitrate therapy, these re-sults are provocative and may support new uses of ni-trates in patients or benefits that have until now re-mained unrecognized.

Sublingual or buccal nitroglycerin is used either to ter-minate an acute attack of angina or for short-term pre-vention of angina. Nitroglycerin is also the mainstay of therapy for relieving acute coronary vasospasm because of its rapid onset of action. When taken at the onset of chest pain, the effects of nitroglycerin appear within 2 to 5 minutes; however, the true duration of action is diffi-cult to establish in patients with secondary angina, since the onset of pain causes patients to reduce their physi-cal activity, and this alone can ameliorate the symptoms. Isosorbide dinitrate and pentaerythritol tetranitrate also can be taken sublingually, shortly before antici- pated physical or emotional stress, to prevent anginal attacks.

Nitroglycerin ointment applied to the skin acts within 15 minutes and may produce its effects for 2 to 6 hours. Sustained-release transdermal nitroglycerin has been shown to deliver an antianginal effect for 2 to 4 hours following small doses and up to 24 hours after larger doses.

Orally administered long-acting nitrates, including nitroglycerin and various nitrate esters, nitroglycerin ointment, and transdermal nitroglycerin, were devel-oped with the goal of providing a nitrate preparation that would have prolonged pharmacological activity for prophylactic therapy of angina pectoris. Considerable controversy surrounds the therapeutic use of the orally active agents because of their extensive first-pass me-tabolism, and many clinicians consider them to be inef-fective. More recently, however, numerous clinical in-vestigations have demonstrated the efficacy of transdermal nitroglycerin, although tolerance can be a problem with prolonged transdermal exposure to nitro-glycerin. The drugs and dosage forms of organic nitrates available for therapeutic use, their usual dose, onset of action, and duration of action are summarized in Table 17.2. 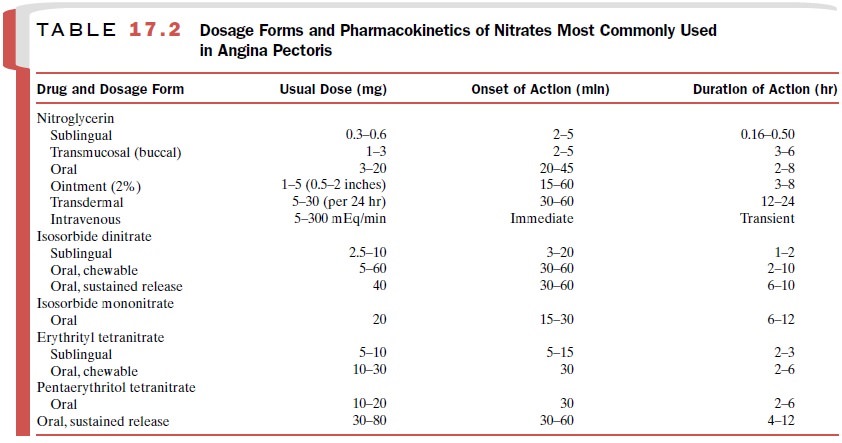 Repeated and frequent exposure to organic nitrates is accompanied by the development of tissue tolerance to the drug’s vasodilating effects. When nitroglycerin for-mulations (e.g., transdermal patches, sustained-release oral dosing, or ointments) that produce sustained plasma and tissue levels are used, tolerance may occur within 24 hours. The mechanism underlying the phe-nomenon of nitrate tolerance is not as yet completely understood but may be related to a nitrate-induced ox-idation of sulfhydryl groups via the formation of free radicals, a decrease in the sensitivity of vascular smooth muscle soluble guanylate cyclase, or activation of the renin–angiotensin system.

To help avoid nitrate tolerance, clinicians should employ the smallest effective dose and administer the compound infrequently. A daily nitrate-free period is also recommended, particularly with use of the trans-dermal patches or ointment. A better understanding of the pharmacokinetic profile achieved with these sus-tained-release formulations should result in more effec-tive dosing regimens.

Since depletion of tissue stores of sulfhydryl groups has been proposed to play an important role in nitrate tolerance, some investigators have administered sulfhydryl-containing compounds in an attempt to re-verse or prevent the development of tolerance. The most commonly used agent is N-acetylcysteine (NAC), which is hydrolyzed in vivo to cysteine.

Although some investigators have shown a positive effect with NAC, the antinitrate tolerance effect of this compound has not been universally confirmed. Thus, further well-controlled clinical studies are necessary to establish the effectiveness of sulfhydryl-containing compounds at preventing or reversing nitrate tolerance.

Industrial exposure to organic nitrates induces both tolerance and physical dependence. The state of de-pendence becomes manifest when exposure to nitrates is withdrawn suddenly. For example, munitions workers who have become dependent on nitroglycerin have been reported to undergo angina, myocardial infarc-tion, or even sudden death following removal from contact with nitroglycerin. Some of these patients showed symptoms of ischemic heart disease, even though their coronary arteriography was judged to be normal. Since it is possible that coronary vasospasm plays a role in the pathogenesis of angina that occurs in nitrate-dependent individuals, these patients should be cautioned to watch for increased chest pain when they withdraw from medication or discontinue their exposure.

Vascular headache, postural hypotension, and reflex tachycardia are common side effects of organic nitrate therapy. Fortunately, tolerance to nitrate-induced head-ache develops after a few days of therapy. Postural hy-potension and tachycardia can be minimized by proper dosage adjustment and by instructing the patient to sit down when taking rapidly acting preparations. An ef-fective dose of nitrate usually produces a fall in upright systolic blood pressure of 10 mm Hg and a reflex rise in heart rate of 10 beats per minute. Larger changes than these should be avoided, because a reduction in myo-cardial perfusion and an increase in cardiac oxygen re-quirements may actually exacerbate the angina.

Since nitrite ions oxidize the iron atoms of hemo-globin and convert it to methemoglobin, there may be a loss in oxygen delivery to tissues. While methemoglo-binemia does not follow therapeutic doses of organic ni-trates, it can be observed after overdosage or accidental poisoning.

Chest pain that is not relieved by two or three tablets within 30 minutes may be due to an acute myocardial infarction. In addition, nitrate administration may result in an increase in intracranial pressure, and therefore, these drugs should be used cautiously in patients with cerebral bleeding and head trauma.