β-adrenoceptor blockade is a rational approach to the treatment of angina pectoris, since an increase in sym-pathetic nervous system activity is a common feature in acute anginal attacks.

β-adrenoceptor blockade is a rational approach to the treatment of angina pectoris, since an increase in sym-pathetic nervous system activity is a common feature in acute anginal attacks. Based on their ability to reduce oxygen demand, all β-blockers tested so far have also been shown to be effective in the treatment of second- ary angina. Administration of these compounds results in a decrease in frequency of anginal attacks, a reduc-tion in nitroglycerin consumption, an increased exercise tolerance on the treadmill, and a decreased magnitude of ST segment depression on the electrocardiogram during exercise. Propranolol is the prototype of this class of compounds

β-Blockers approved for clinical use in secondary angina in the United States include propranolol and nadolol (Corgard), compounds that block both β1- and β2-adrenoceptors equally, while atenolol (Tenormin) and metoprolol (Lopressor) are cardioselective β1β-receptor antagonists.

The myocardial response to exercise includes an in-crease in heart rate and myocardial contractility. These effects are mediated in part by the sympathetic nervous system. Propranolol and other  β-adrenoceptor blockers antagonize the actions of catecholamines on the heart and thereby attenuate the myocardial response to stress or exercise (Fig. 17.3). The resting heart rate is reduced by propranolol, but not to the same extent as is the de-crease in exercise-induced tachycardia. Overall, propra-nolol reduces myocardial oxygen consumption for a given degree of physical activity. 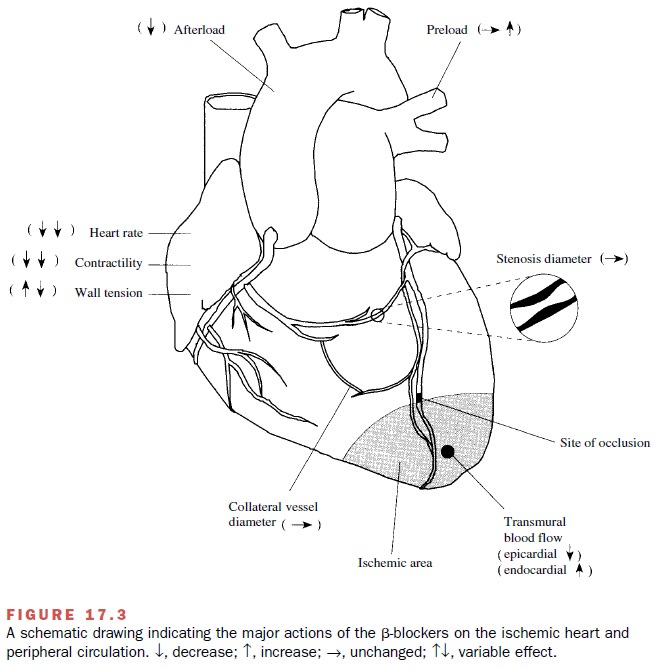 Arterial blood pressure (afterload) is also reduced by propranolol. Although the mechanisms responsible for this antihypertensive effect are not completely un-derstood, they are thought to involve (1) a reduction in cardiac output, (2) a decrease in plasma renin activity, an action in the central nervous system, and (4) a re-setting of the baroreceptors . Thus, propranolol may ex-ert a part of its beneficial effects in secondary angina by decreasing three of the major determinants of myo-cardial oxygen demand, that is, heart rate, contractility, and systolic wall tension.

Propranolol and other β-blockers also have been shown to produce an increase in oxygen supply to the subendocardium of ischemic areas. The mechanism re-sponsible for this effect is most likely related to the ability of β-blockers to reduce resting heart rate and in-crease diastolic perfusion time.

Because subendocardial blood flow and flow distal to severe coronary artery stenosis occur primarily during diastole, this increase in diastolic perfusion time, due to the bradycardiac effect of propranolol and other β-blockers, would be expected to increase subendocardial blood flow to ischemic re-gions. β-blockers have no significant effect on coronary collateral blood flow. Finally, there is evidence that - blockers can inhibit platelet aggregation.

Propranolol is well absorbed from the gastrointestinal tract, but it is avidly extracted by the liver as the drug passes to the systemic circulation (first-pass effect). This effect explains the large variation in plasma levels of propranolol seen after oral drug administration.

Because of these interindividual variations in the ki-netics of propranolol, the therapeutic dose of this drug is best determined by titration. End points of titration include relief of anginal symptoms, increases in exercise tolerance, and plasma concentration of propranolol be-tween 15 and 100 ng/mL. For additional details on the pharmacokinetics of propranolol and other β-receptor antagonists approved for clinical use in the treatment of angina pectoris, see Table 17.3.

By attenuating the cardiac response to exercise, propra-nolol and other β-blockers increase the amount of ex-ercise that can be performed before angina develops. Although propranolol does not change the point of im-balance between oxygen supply and demand at which angina occurs, it does slow the rate at which the imbal-ance point is reached.

Propranolol is particularly indicated in the manage-ment of patients whose angina attacks are frequent and unpredictable despite the use of organic nitrates. Propranolol may be combined with the use of nitro-glycerin, the latter drug being used to control acute at-tacks of angina. The combined use of propranolol and organic nitrates theoretically should enhance the thera-peutic effects of each and minimize their adverse effects (Table 17.4).

Propranolol and nadolol also have been used suc-cessfully in combination with certain calcium entry blockers, particularly nifedipine, for the treatment of secondary angina. Caution should be used, however, when combining a β-blocker and a calcium channel blocker, such as verapamil or diltiazem, since the nega-tive inotropic and chronotropic effects of this combina-tion may lead to severe bradycardia, arteriovenous nodal block, or decompensated congestive heart failure.

Abrupt interruption of propranolol therapy in individu-als with angina pectoris has been associated with reap-pearance of angina, acute myocardial infarction, or death due to a sudden increase in sympathetic nervous system tone to the heart. The mechanisms underlying these re-actions are unknown, but they may be the result of an in-crease in the number of β-receptors that occur following chronic  β-adrenoceptor blockade (up-regulation of re-ceptors). When it is advisable to discontinue propranolol administration, such as before coronary bypass surgery, the dosage should be tapered over 2 to 3 days.