A mechanism describes how a reaction takes place by showing what is hap- pening to valence electrons during the formation and breaking of bonds.

A mechanism describes how a reaction takes place by showing what is hap- pening to valence electrons during the formation and breaking of bonds.

However, most reactions in organic chemistry involve heterolytic cleavage where the bonding electrons move as a pair onto one atom and not the other.

An understanding of electrophilic and nucleophilic centers allows a prediction of where reactions might occur but not what sort of reaction will occur. In order to understand and predict the outcome of reactions, it is necessary to understand what goes on at the electronic level. This process is known as a mechanism.

A mechanism is the ‘story’ of how a reaction takes place. It explains how mole- cules react together to give the final product. The mechanism tells us how bonds are formed and how bonds are broken and in what order. It explains what is hap- pening to the valence electrons in the molecule since it is the movement of these electrons  which  result  in  a  reaction.  Take  as  a  simple  example  the  reaction between a hydroxide ion and a proton to form water (Fig. 1). The hydroxide ion is a nucleophile and the proton is an electrophile. A reaction takes place between the nucleophilic center (the oxygen) and the electrophilic center (the hydrogen) and water is formed. A new bond has been formed between the oxygen of the hydroxide ion and the proton. The mechanism looks at what happens to the electrons.

Explaining what happens to all the valence electrons during a reaction mechanism can be rather long-winded if you are trying to explain it all in words. Fortunately, there is a diagrammatic way of showing the same thing – using curly arrows. For example, the mechanism described above can be explained by using a curly arrow to show what happens to the lone pair of electrons (Fig. 2). In this case, the arrow starts from a lone pair of electrons on the oxygen (the source of the two electrons) and points to where the center of the new bond will be formed.

In some textbooks, you may see the arrow written directly to the proton (Fig. 3). 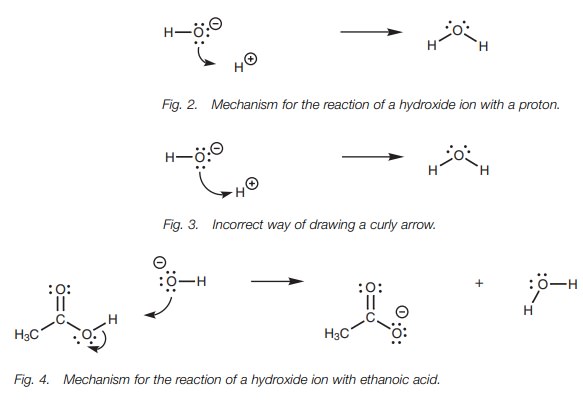 Formally, this is incorrect. Arrows should only be drawn directly to an atom if the electrons are going to end up on that atom as a lone pair of electrons.

The following rules are worth remembering when drawing arrows:

● curly arrows start from the source of two electrons (i.e. a lone pair of electrons on an atom or the middle of a bond which is about to be broken);

● curly arrows point to anatomif the electrons are going to end up as a lone pair on that atom;

● curly arrows point to where a new bond will be formed if the electrons are being used to form a new bond.

The mechanism (Fig. 4) explains what happens when a hydroxide ion reacts with a carboxylic acid and is a demonstration of how arrows should be drawn. One of the lone pairs of electrons on the hydroxide ion is used to form a bond to the acidic proton of the carboxylic acid. The curly arrow representing this starts from a lone pair of electrons and points to the space between the two atoms to show that a bond is being formed.

At the same time as this new bond is being formed, the O–H bond of the car-boxylic acid has to break. This is because the hydrogen atom is only allowed one bond. The electrons in this bond end up on the carboxylate oxygen as a third lone pair of electrons. The arrow representing this starts from the center of the bond being broken and points directly to the atom where the electrons will end up as a lone pair.

Notice also what happens to the charges. The negatively charged oxygen of the hydroxide ion ends up as a neutral oxygen in water. This is because one of the oxygen’s lone pairs is used to form the new bond. Both electrons are now shared between two atoms and so the oxygen effectively loses one electron and its negative charge. The oxygen in the carboxylate ion (which was originally neutral in the carboxylic acid) becomes negatively charged since it now has three lone pairs of electrons and has effectively gained an extra electron.

This form of bond breaking is known as a homolytic cleavage. The radical atoms obtained are neutral but highly reactive species since they have an unpaired valence electron.

There are some important radical reactions in organic chemistry, but the major-ity of organic reactions involve the heterolytic cleavage of covalent bonds where electrons move together as a pair (Fig. 6).