A beam element is defin ed as a long, slender member (one dimension i s much larger than the other two) that is subje cted to vertical loads and moments, which pro duce vertical displacements and rotations.

through the ele ment stiffness matrix,Kv.

The loads that are appli ed to the beam element are assumed to be stat ic and not to vary over the time period being considered, this assumption is only valid if the r ate of change of the force is much less than th e applied force (F >> dF/dt). If the loads vary significantly, (if the variation in load is not much less than the applied force) then the pro blem must be considered as dynamic.

The beam element is assumed to have a constant cross-section, which m eans that the cross-sectional area and the mom ent of inertia will both be constant (i.e., the be am element is a prismatic member). If a bea m is stepped, then it must be divided up into sections of constant cross-section, in order to obtain an exact solution. If a beam is tape red, then the beam can be approximated by us ing many small beam elements, each having the same cross-section as the middle of the tap ered length it is approximating. The more sections that are used to approximate a tapered be am, the more accurate the solution will be. 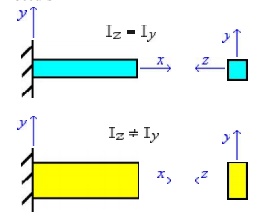 Where (Iz) refers to the moment of inertia, resisting bending about the "z" axis and (Iy) about the "y" axis.

The Beam Element is a Slende r Member

A beam is assumed to be a slender member, when it's length (L) is moree than 5 times as long as either of it's cross-sec tional dimensions (d) resulting in (d/L<.2). A beam must be slender, in order for the beam equations to apply, that were used to derive our FEM equations.

The Beam Bends without Twisting.

When a beam element b ends, it is assumed that it will deflect uniformly, thus the cross section will move uniform ly and remain plane to the beam centerline. In other words, plane sections remain plane and normal to the x axis before and after bending.

A beam element has the s ame material composition throughout and there fore the same mechanical properties at every position in the material. Therefore, the modulus of elasticity E is constant throughout the beam element. A member in which the material properties varies from one point to the next in t he member is called inhomogenous (non-homo genous). If a beam is composed of different ty pes of materials, then it must be divide up into elements that are each of a single homogeneous material, otherwise the solution will not be exact.

A beam element has the same mechanical and physical properties in all directions, i.e., they are independent of dir ection. For instance, cutting out three tensile test specimens, one in the x-direction, one in t he y-direction and the other oriented 45 degre es in the x-y plane, a tension test on each s pecimen, will result in the same value for th e modulus of elasticity (E), yield strength  and ultimate strength. Most metals arre considered isotropic. In contrast fibrous m aterials, such as wood, typically have properties that are directionaly dependant and are generally considered anisotropic (not isotropic).

The Proportional Limit is not Exceeded

It is assumed that the b eam element is initially straight and unstressed. It is also assumed that the material does n ot yield, therefore the beam will be straight af ter the load is released. These assumptions me an that the beam must be made of an elastic material, one which will return to it's original size and shape when all loads are removed, if not stressed past the materials elastic or proportional limit. It is also assumed that the beam is not stressed past the proportional limit, at w hich point the beam will take a permanent set and will not fully return to it's original size an d shape, when all loads are removed. Below th e proportional limit an elastic material is in the linear elastic range, where the strain  varies linearly with the applied load and the stress (  ) varies linearly according to: σ = Eε  , where E is the     modulus of elasticity.

For simplicity we will in troduce the rigid body modes using a mesh c omposed of a single element. If only translatio nal rigid body motion occurs, then the displaceement at local node I will be equal to the displacement at local node J. Since the displacem ents are equal there is no strain developed in t he element and the applied nodal forces cause the element to move in a rigid (non-deflected) vertical motion (which can be either up as show n below or it can be in the downward directio n depending on the direction of the applied force s).

This rigid body mode can be suppressed by prescribing a vertical nodal displace ment.

If rotational rigid body motion occurs, then the rotation at local node I will be equal to the rotation at local node J (i.e., in magnitude and direction). In this situation th e nodal forces and/or moments applied to the element, cause the element to rotate as a rigid body (either clockwise as shown below or counterclockwise depending on the direction o f the applied forces and/or moments).

This rigid body mode can be suppressed by prescribing a nodal translation or rotation.

If translational and rotational rigid body motion occurs simultaneously then: 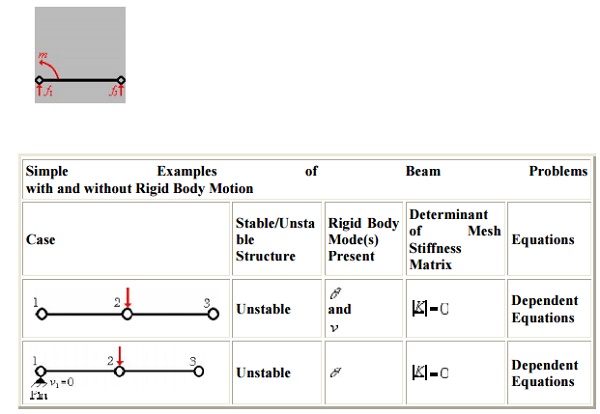 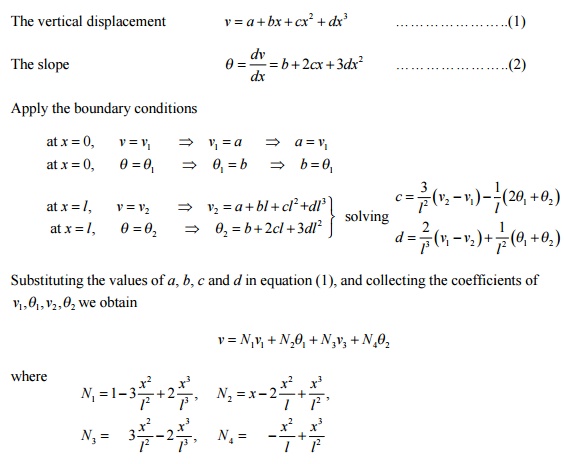 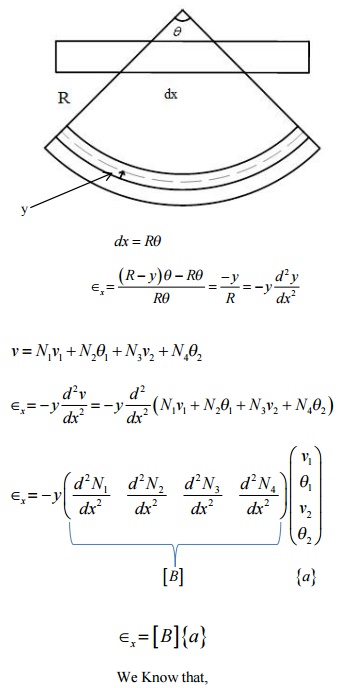 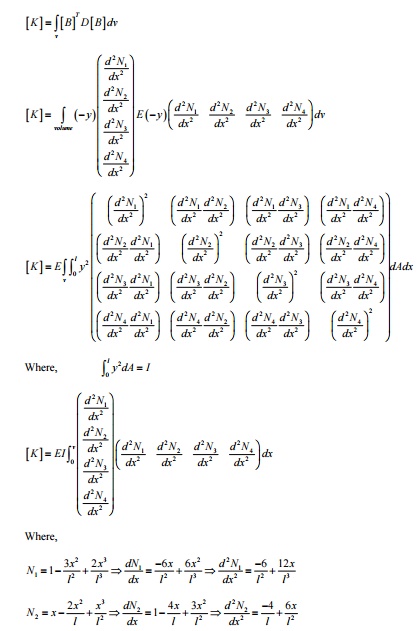 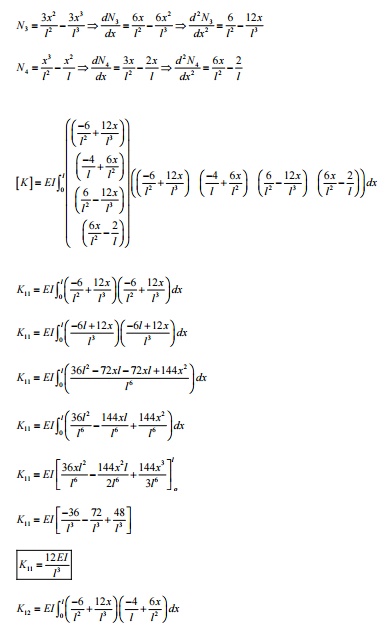 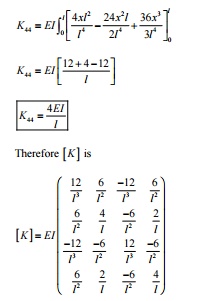 A beam is a long, slender structural member generally subjected to transverse loading that produces significant bending effects as opposed to twisting or axial effects. An elemental length of a long beam subjected to arbitrary loading is considered for analysis. For this elemental beam length L, we assign two points of interest, i.e., the ends of the beam, which become the nodes of the beam element. The bending deformation is measured as a transverse (vertical) displacement and a rotation (slope). Hence, for each node, we have a vertical displacement and a rotation (slope) – two degrees of freedom at each node. For a single 2-noded beam element, we have a total of 4 degrees of freedom. The associated “forces” are shear force and bending moment at each node. 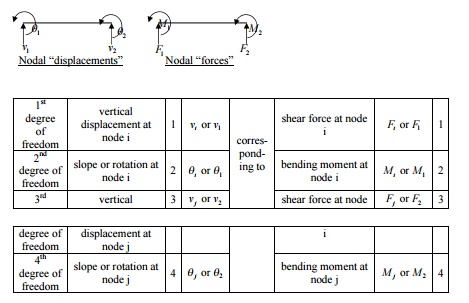 The stiffness term kij indicates the force (or moment) required at i to produce a unit deflection (or rotation) at j, while all other degrees of freedom are kept zero. 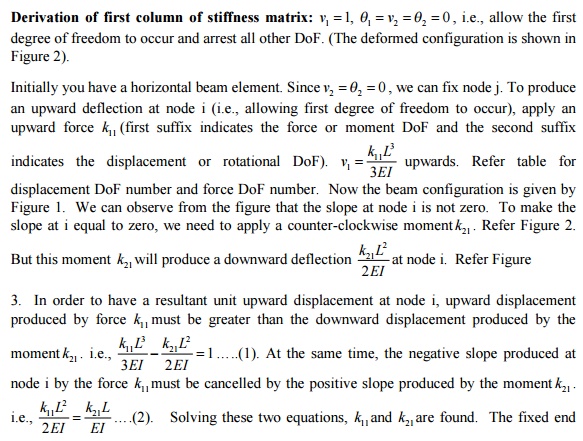 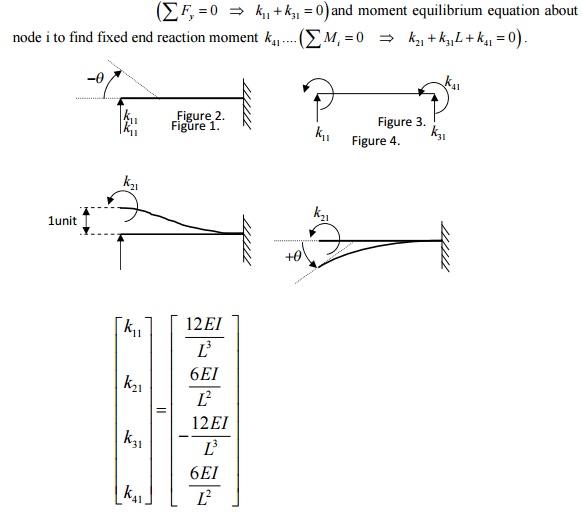 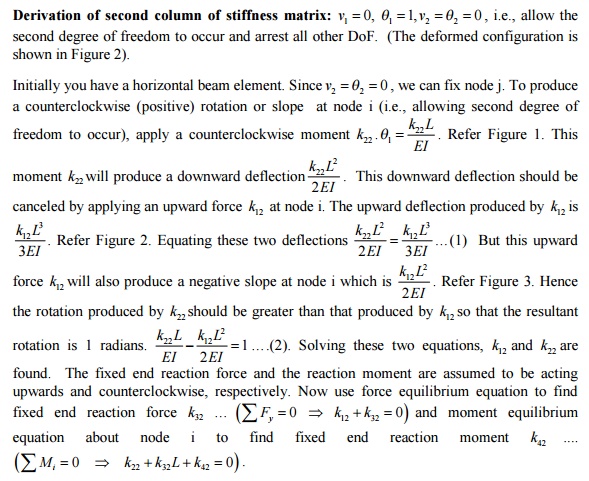 found. The fixed end reaction force and the reaction moment are assumed to be acting upwards and counterclockwise, respectively. Now use force equilibrium equation to find fixed  end          reaction force

Initially you have a horizontal beam element. Since V1=q1=0 we can fix node i. To produce an upward deflection at node j (i.e., allowing third degree of freedom to occur), apply an upward force k33 .

upwards. Now the beam configuration is given by Figure 1. We can observe from 3EI

the figure that the slope at node j is not zero. To make the slope at j equal to zero, we need to apply a clockwise moment k43 . Refer Figure 2. But this moment k43 will produce a downward

at node j. Refer Figure 3. In order to have a resultant unit upward 2EI displacement at node j, upward displacement produced by force k33 must be greater than the

fourth degree of freedom to occur and arrest all other DoF. shown in Figure 2).

i.e., allow the (The deformed configuration is shown in fig.

Initially you have a horizontal beam element.

This upward deflection should be canceled by applying a

Refer Figure 3. Solving these two equations, k34 and k44 are found. The fixed end reaction force and the reaction moment are assumed to be acting upwards and counterclockwise, respectively.

and moment equilibrium equation about node i to find fixed end

Finite element representation of the problem

Conversion of UDL into nodal forces and nodal mo 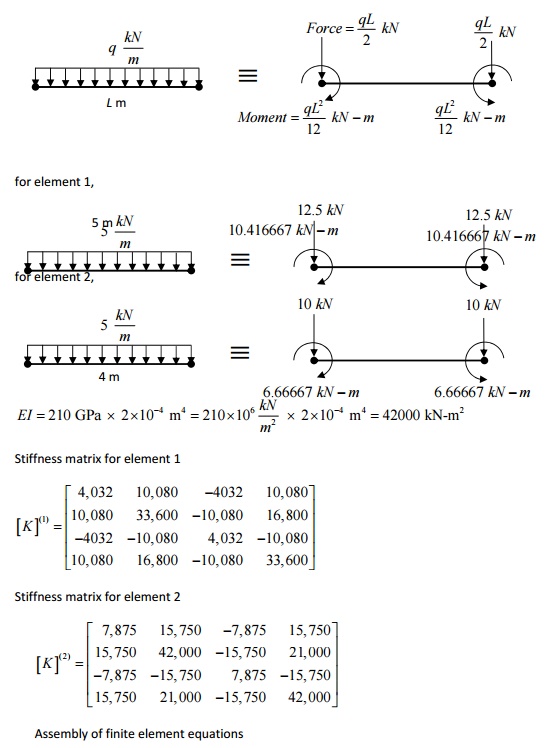 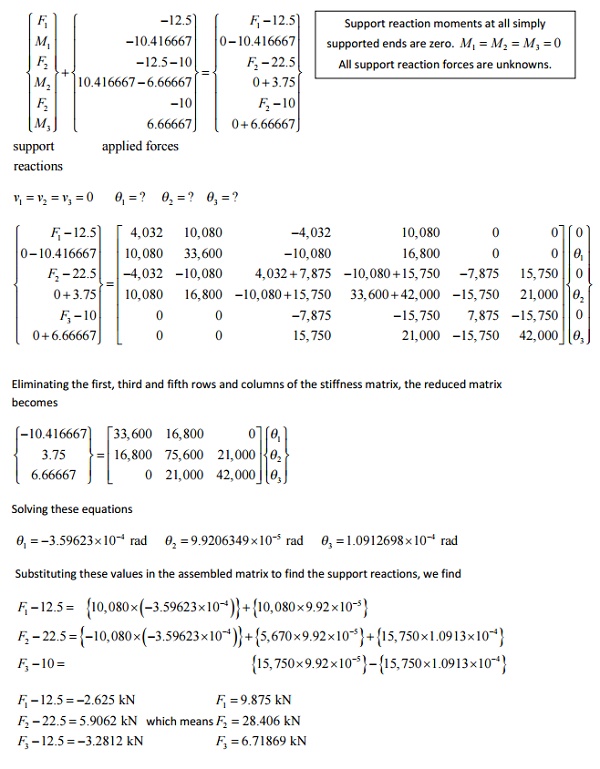 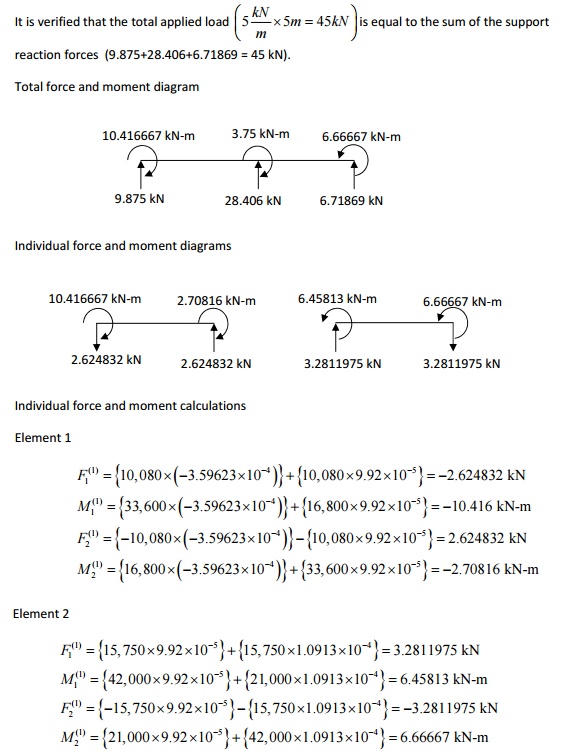 Given that E=210 GPa and I=4×10 -4 m4, cross section of the beam is constant. Determine the deflection and slope at point C. calculate the reaction forces and moments. DARYL LOGAN P 171-172 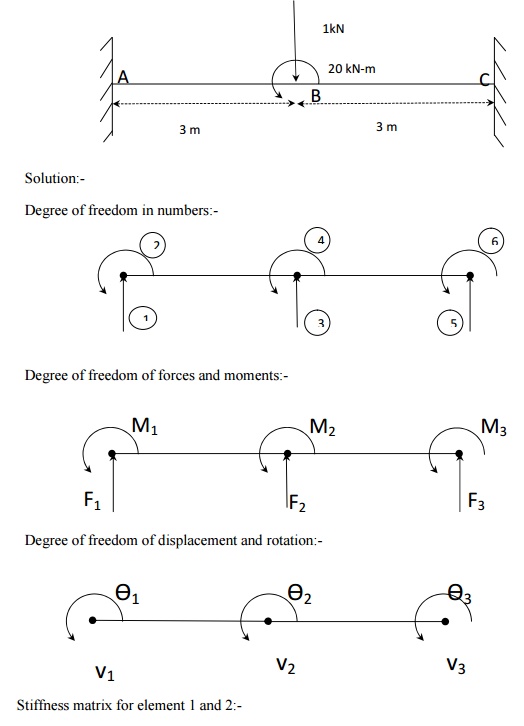 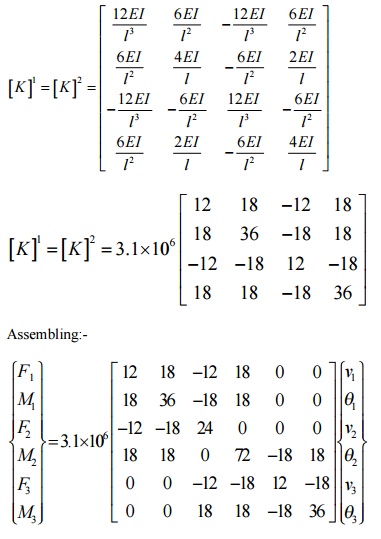 Therefore first, second, fifth, sixth columns are ineffective and hence the reduced matrix is given by

Deflection and slope at point c:- 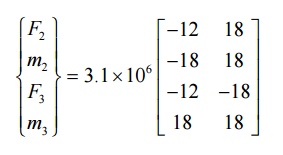 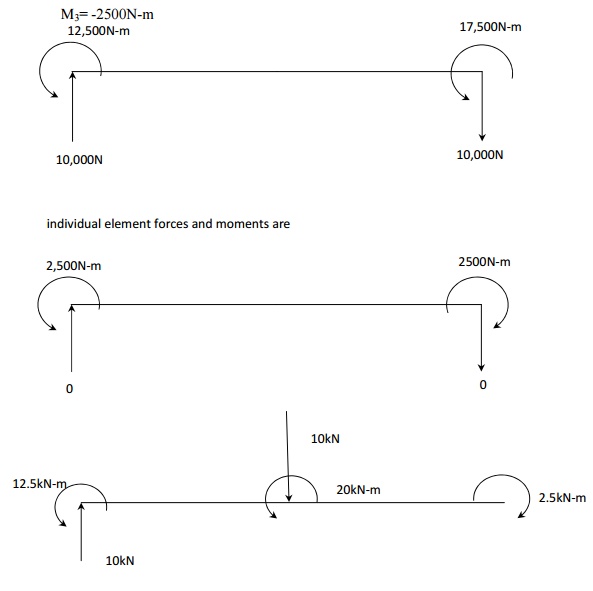